Home›Movie Reviews›Night of the Living Dead - Criterion Brings George A. Romero's Zombie Classic Back From the Dead!

Night of the Living Dead - Criterion Brings George A. Romero's Zombie Classic Back From the Dead!

Night of the Living Dead is directed by George A. Romero, and stars Duane Jones, Judith O'Dea, Marilyn Eastman, Karl Hardman, Judith Ridley, and Keith Wayne. The film was first released theatrically in 1968.

Barbra and her brother Johnny make a long drive to put a wreath on the grave of their deceased father, which is an annual occurrence for the siblings. During their trip to the graveyard, they are attacked by a mysterious zombified man which ends with Johnny being mortally wounded, leaving Barbra to make her escape. She takes refuge in a farmhouse with a family, a young couple, and a young man intent on using his wits and knowledge to stay alive in a time of crisis. As the numbers of zombies grow, the survivors find themselves fighting for their lives, as tempers flare not only towards their assailants, but one another. Will they ride out the attack and be rescued, or are they all doomed to be eaten alive by the living dead?

George A. Romero, who directed Night of the Living Dead, likely had no idea how big of a cultural phenomenon his movie would become. Prior to this, his experience primarily consisted of the creation of television commercials! In all, Romero, who tragically passed away in 2017, would direct six Living Dead films over the decades, with the last being released in 2010. What started out as a low-budget black-and-white zombie movie ultimately would become one of the most revered and influential films of all time, transforming horror from a cheesy “B-movie” genre into something truly terrifying. 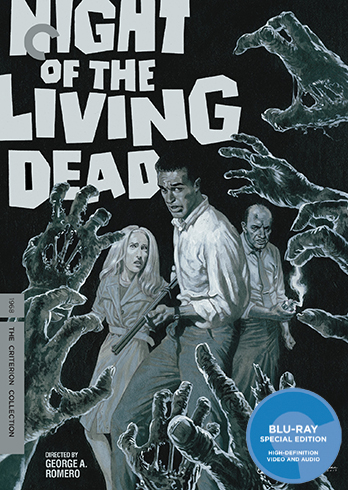 Looking back at it half a century later, how does Night of the Living Dead stack up? Pretty damn good, actually. The movie’s low budget, black-and-white cinematography, and everyday settings, ironically, end up working to the film’s advantage. The performances, particularly from star Duane Jones, add something to the experience, and the zombie makeup and realistic violence guarantee that the movie remains genuinely creepy and terrifying long after its initial release, which can be said of far fewer recent films, despite bigger budgets.

Given the relative inexperience of the cast, their performances are surprisingly effective. Duane Jones steals every scene he’s in; the movie was groundbreaking as one of the first to have a black actor as a take-no-shit protagonist, although Romero has stated in interviews that the role was written with a Caucasian in mind, and Jones was given the part simply because he gave the best audition. In either event, his performance is one for the ages, and one of the reasons the movie is revered and remembered.

The rest of the cast fares surprisingly well, including Judith O’Dea who lost her brother at the hands of the zombies, and is understandably traumatized and in a state of unease for most of the film. Her reactions to the horrors she sees are just as effective as the depictions of the zombies themselves. Other strong performances include Karl Hardman (a producer on the film) as a family man that regularly clashes with the other heroes, and George Kosana as a zombie-hunting sheriff late in the movie.

And then, of course, are the zombies themselves. The modern depiction of zombies in popular culture owes a great deal, if not everything, to Night of the Living Dead. Slow moving, mute, and apparently retaining some minor semblance of their past lives as they attack humans and turn them into more of the undead, this is where the modern-day movie zombie was born.

The overall tone of the film was shocking to audiences of its day. Those expecting a lighthearted romp quickly found themselves cowering at the visuals unfolding before them, with newfound levels of violence, suspense, and sheer terror. Romero’s zombie world was born here, and with it, a whole new level of horror on the big screen. It’s a film that’s not afraid to take chances, and its ending is anything but optimistic.

Night of the Living Dead is a classic for the ages, and a film that every film buff or zombie/horror fan should experience for themselves. Absolute highest recommendations for this classic, which continues to strike fear into the hearts of anyone viewing it, even half a century on.

Night of the Living Dead has been reissued countless times over the years by numerous studios. Due to an error on the original film prints, the movie is in the public domain, and thus, anyone can sell copies of it/legally download it online/etc. The Criterion Collection’s Blu-ray Disc is not the first release of the film in HD (a poorly-reviewed disc from Mill Creek followed a few months prior). But Criterion’s disc is sourced from a copyrighted 4K restoration of a print owned by the Museum of Modern Art (MOMA). This version of the film is an absolute revelation after decades of poor-condition prints, clearing up the picture drastically while retaining a filmic quality throughout. Audio too is given an upgrade here, sounding as good as the movie ever will despite its low budget.

Criterion also gives the viewer numerous bonus features, many of which are previously unreleased and newly made for this disc. The features begin on the first disc with two commentary tracks, and an early rough cut of the film under its working title, Night of Anubis. The rough cut, not surprisingly, is not in the best of shape, and is missing some of its content. It is not drastically different from the final movie, but does give you an idea of what the filmmakers were working with when they tried to shop the movie to potential distributors. An introduction, with more information on this early cut of the film, is also included.

The bulk of the bonus features are on the second disc. Here, you will find dailies, rare behind-the-scenes footage, television interviews, film festival content, trailers and TV spots, and even radio promos for the movie. The highlight of the second disc’s bonus content is a new featurette which includes interviews with some superstar filmmakers that were influenced by the movie, such as Robert Rodriguez (who made the retro-style zombie movie Planet Terror as part of the Grindhouse double feature in 2007) and Guillermo del Toro (whose 2017 film, The Shape of Water, just won Best Picture at the 90th Academy Awards).

This package comes strongly recommended to any fan of the film. If you are a Night of the Living Dead fan, no matter how many times you have already bought the movie, buy Criterion’s package. The film stands the test of time and is as scary as it’s ever been. With the best transfer the film has ever gotten and is likely to ever get, and a ton of bonus features, you can’t go wrong here. Absolute highest recommendations.

DISCLAIMER: All images seen in this film are the property of their respective copyright orders, including The Criterion Collection, Janus Films, and the Museum of Modern Art (MOMA). For promotional purposes only. All rights reserved.

Concert For George: A Look Back at ...

TailGun - Vegas Rockers Strike Back with ...