God Damn Evil is the latest release from Stryper, and their twelfth studio release overall. Following the releases of 2013’s No More Hell to Pay and 2015’s Fallen, the yellow-and-black clad Christian rock quartet parted ways with classic bassist Tim Gaines, with his replacement being Perry Richardson, best known for his role in Firehouse.

Unlike many of their contemporaries who have struggled to put out quality music or have moved so far away from their roots, Stryper has consistently satisfied in recent years, with those aforementioned two records being two of the best the band ever released. Would the group be able to keep the chain going with a third modern-day masterpiece? Given that the band underwent a band member change for the first time in several years, this fan was initially a bit skeptical (though this wasn’t exactly Gaines’ first time leaving the band).

This record was a source of controversy even before it was released due to the title God Damn Evil, with Walmart stores refusing to carry the album (but then again, has their music selection ever been anything worth writing home about?) The band members insist the title is a literal statement, with them actually asking God to damn the evil that exists in today’s world (interestingly, this is similar to an argument made by Charlton Heston in Planet of the Apes, regarding his classic “Damn you all to Hell!” monologue near the movie’s end.) In either event, fans will get the album wherever they have to go for it. 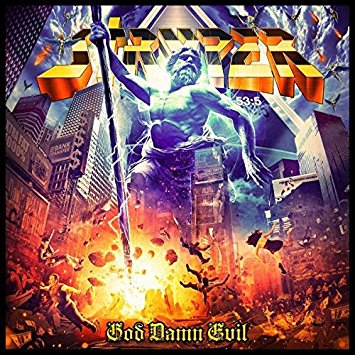 If Stryper wasn’t a Christian band, I’d swear they sold their souls to the Devil for endless musical talent that never diminishes with age. But as is, the band’s secret must just be that these are genuinely talented individuals who combine kick-ass rock and roll with thought-provoking Christian messages. And while I don’t know if I would put God Damn Evil as high up the pedestal as the previous two releases, it’s still a, pardon the expression, damn good album.

The album starts strong with the powerful “Take It to the Cross,” which is fantastic, aside from its thrashy chorus, which feels horribly out of place on a Stryper record. It makes for a fantastic opener otherwise. The title cut is another definite highlight, with its powerful lyrics and themes. The rest of the album is no less excellent, with a great variety of straight-up hard and heavy rockers, more melodic and slow tracks, and everything in between. Everything flows together nicely, but the tracks are diverse enough that you won’t be bored here.

What’s truly impressive here is the talent of the band members. Michael Sweet remains a criminally underrated vocalist who, unlike many of his contemporaries, has not substantially diminished in terms of vocal power. Guitarist Oz Fox once more shows off why he’s an axeman who never gets the credit he deserves; it’s criminal this guy doesn’t make more “best guitarist” lists. Likewise, newcomer Perry Richardson is a welcomed addition to the band; the chemistry of the players is in no way impacted, and it feels as much like a Stryper record as any other.

While I wouldn’t call God Damn Evil my favorite Stryper album, it’s still a fantastic addition to the band’s discography, and a must buy for the fans.