Home›Movie Reviews›Breaking In Brings the Suspense.... But Not Much Else

Breaking In Brings the Suspense.... But Not Much Else

Shaun Russell, a mother of two, heads up to the home of her estranged criminal father following his death, to get his home ready to list on the market, with her two kids in tow. Upon arriving, the family discovers the home is suspiciously well armored against a potential invasion. Things take a dramatic turn when a mysterious group of home invaders shows up, claiming to be searching for millions of dollars locked in a hidden safe. It’s up to Shaun to fight back and keep her kids safe.

Breaking In is formulaic and a bit of a mess, though it does still manage to impress in some regards, namely its leading lady. This isn’t a great film, and while there are certainly better films out there you could buy a ticket for, there are worse ones as well. It’s strictly a middle-of-the-road affair but not without its highlights. 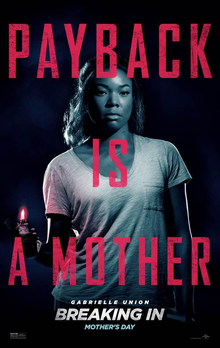 For the positives, casting is top-notch. Gabrielle Union is fantastic as a mother determined to protect her kids and her life by any means necessary, and seeing an “everyman” protagonist fight back against armed career criminals is always fun. Even the young people playing her kids are surprisingly effective, and we do find ourselves drawn into their predicament, and actually somewhat care about their fate. While they don’t get the same level of development or emphasis as our lead, the actors playing the criminals do the best they can with the material they’re given.

Sadly, the movie is a mess, and one can’t help but wonder if it was edited down heavily from its original format. Characters randomly get from one end of the house to the other in record time, even though locked doors and walls, with no apparent difficulty. Despite the solid performances, most of the supporting cast can’t hide the rather weak writing. The criminals get mortally wounded on numerous occasions but are always able to get back on their feet and keep fighting (someone gets hit with a car and somehow manages to walk all the way back to the house, and fight like nothing happened, aside from a little blood and bruising on his body – I’m not making this up!) In one scene a criminal explicitly states his desire to rape the main character’s daughter, which hardly seems appropriate for a PG-13 film, and leads one to further wonder about whether the movie was edited down from a R rating to appease the censors. In the long run, the movie feels more like a vehicle for suspense-driven sequences than something deep or meaningful, and doesn’t even really give the audience a proper conclusion or send-off.

Breaking In has its moments, but a great film this isn’t. Gabrielle Union deserves a better star vehicle than this. It’s not a total loss, but not one you’ll want to rush to the theater for either.

DISCLAIMER: Images in this review are the property of their respective copyright holders, including Will Packer Productions, Practical Pictures, and Universal Pictures. For promotional purposes only. All rights reserved.

102 Not Out - Surprisingly Entertaining Indian ...