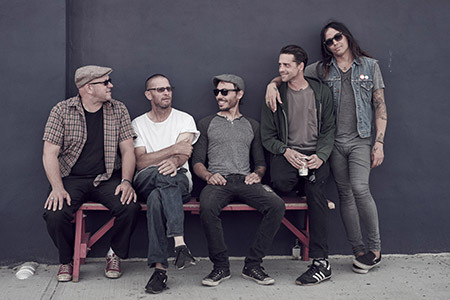 $wingin Utter$ have been around since the late 80's, with just a short 7 year break, they reformed in 2010 and have been on the road it would seem, ever since.  This coming weekend, they will be invading Fremont Street along with such bands as NOFX, L7, Rise Against, Slaves UK, Mighty Mighty Bosstones, and GBH (to name but a few!)  for Punk Rock Bowling's 20th Anniversary weekend in downtown Vegas!  Busy as they are, Darius took a few moments to answer some burning questions our gal Courtney Ware and the ZRockR crew threw at him as excitement builds for one of THE best festivals the downtown area hosts every year!

ZR: What would you guys say your biggest influences are? Also, who are your own personal favorite artists that are playing today?
DK:----Well, they’re kind of all over the place, and they always have been, but they’ve also changed over the years (as far as importance or whatever). When we first started, our main influences (to name a few of the big ones) were The Pogues, Buzzcocks, Stiff Little Fingers, The Clash, The Replacements, Black Flag, etc. etc. typical I guess. Pretty soon thereafter a lot of other bands, as well as singer/songwriter/folk/country artists started popping in there, like Tom Waits, Roger Miller, Johnny Cash, Townes Van Zandt, Dwight Yoakam, X… really too many to mention. It wasn’t that we necessarily discovered these artists later, it was more like we learned how to channel the inspiration they gave us a little bit clearer. So, the better we got, the more obviously we ripped them off!
ZR:  We can see that some of you guys have done some side projects, which ones were your most favorite and why?
DK: —I loved Filthy Thieving Bastards and was pretty proud of that stuff. It was just cool to play whatever we wanted to, decidedly not tied down to any style or genre or anything. I just wrote a bunch of country shit, but there was punk rock stuff, 60’s pop kind of stuff, just all over the map. And YES, I realize it wasn’t that much of a stretch from what we were doing with the Utters, but it was still fun! I’d have to say that I’m pretty happy about my solo stuff too, though, because it’s been such a long time coming. It’s been pretty satisfying to make those two records, and I can’t wait to make more.
ZR:  With over 20 years under your belts, do you have a tour or certain show that sticks out in your mind more so than others? (For Johnny and Darius - Original members of the band.)
DK: —Absolutely! My favorite tours are etched into my memory: with NOFX in Japan in the summer of ’99, with No Use For A Name in Europe ’97, and with the Lunachicks in the US/Canada in ’96 (?).
ZR: Can you tell us a bit about the punk rock scene in the Bay Area when you first got started? The late 80’s were flooded with Thrash metal, did that affect how you wrote music during that time?
DK:—When we started, there wasn’t much of a punk rock scene, really. Nothing like it is now, or like it was in the mid-nineties. There were always good bands around, of course, but there wasn’t a whole lot going on (especially in Santa Cruz, where we started). We were super into the English stuff at that time, and that was a rarity as well (and I think its what we really bonded on). We covered Cocksparrer early on, and they were a pretty obscure band to be way into back then. You had to know your shit, but we knew our shit, and our friends did too. We were all record collectors, and we always had eclectic tastes. With all the different music we all listened to, we should probably have ended up sounding more like the fucking Dave Matthews Band than a punk band.
ZR: I know this is Punk Rock Bowling, but as a band who played the very first Van’s Warped Tour, how do you feel about that touring festival coming to an end?
DK: —I don’t think much of it at all, really. That was a great time, and we had a lot of fun on those early Warped Tours, but it was a long time ago, and that tour hasn’t been what it was in a long time. I’m personally glad it’s over, I think it’s time for something new!

ZR: When you took your hiatus to focus on your families, were there ever times where it was especially hard to say no to business? We applaud you for that, by the way! 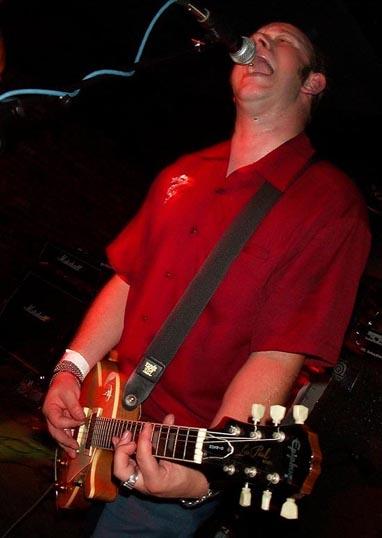 DK: —I was one of the ones sitting there waiting to get started again, actually. I never had a problem with touring while my kids were little, although of course, it was a bit heartbreaking sometimes. That being said, I totally understand why one would want to cut that shit out for a while and be with their family. If we didn’t understand that notion, we wouldn’t be a band today, right?
ZR: Looking at some of the artwork on your album covers through the years, which one/s are your favorite?
DK: — 5 Lessons Learned is my favorite for sure, and I also really liked Poorly Formedand Fistful of Hollow.
ZR: What do your families/kids think of your music? Is there any special influence/motivations because of them and vice versa?
DK: —They dig it, but I don’t think they listen to it every day or anything. I’m not sure how well versed they are in the discography, actually.
But I think they definitely appreciate it.  Of course, they influence me; I’d be a fucking animal if my kids didn’t influence me! I’m sure I’ve instilled some musicality/interest in music in them as well, and my wife too. Music is incredibly important to us. I don’t understand people who aren’t deeply into music. I don’t really tend to have much to say to or have much in common with people who wouldn’t consider music significant to them. It just doesn’t make sense to me. My kids are kind of like that too, I think. We're snobs that way! My eldest is pretty talented as well. He’s a good guitar player and writes his own stuff. It’s good, and it’s not punk!
ZR: You are back after being away for a few years for Punk Rock Bowling-  what do you like most about the event and the Vegas crowd?
DK: —Well, it’s always nice to play to a big festival crowd, especially one that’s super energetic and happy to be there. The vibe has always been great at PRB. For a band of our size, a big festival crowd doesn’t always equal a great response from said crowd…. but it’s always been pretty exceptional at PRB. Mostly, though, the whole long weekend is just a great time, and we get to catch up with shitloads of friends we don’t necessarily see that often, and some that we do! We’re surrounded by our family, basically, and that’s nice.
ZR: Do you feel that Punk is as viable today as it was 20 plus years ago? What do you see has changed and what remains the same?
DK: —It’ll always be viable, as long as people are passionate and angry! It’s become a lot more of the norm, I guess, which is a little less exciting, but who fucking cares? If a band is good, they’re good. If they’re garbage, they’re fucking garbage. Fuck politics, fuck over thinking everything, listen to what you like.
Thank you to Darius for giving us a bit of time!  We will see you ( and all of you too!)  This weekend on Fremont for Punk Rock Bowling!
For more on $wingin Utter$ check out their website!  http://swinginutters.com
If you still need tickets or want more info on the festival then we suggest you head on over to their website and get on it while ya can!  Go Here>>>  https://punkrockbowling.com
Photo Credits:  Swingin Utters by  Joe Leonard  and  Darius Koski by  Tobias Jeg courtesy of Fat Wreck Chords- All Rights Reserved-
Punk Rock Bowling 20- Promo from Punk Rock Bowling- all rights reserved
TagsAgainst MeAngelic UpstartsAT THE DRIVE INCheetah ChromeDarius KoskiDeadboysDowntown Las VegasFat Wreck ChordsFremont StreetGHBL7LawagonMighty Mighty BosstonesNOFXPRB 20Punk Rock BowlingRise AgainstSuicidal TendenciesSwingin UtterTurbonegroX