Home›Movie Reviews›Leave No Trace - From the Woods to the Real World!

Leave No Trace - From the Woods to the Real World!

Leave No Trace is directed by Debra Granik. The film stars Ben Foster and Thomasin McKenzie. It is based upon the novel My Abandonment by Peter Rock.

Will, a Vietnam veteran, lives in a natural public ground in Oregon with his daughter Tom. The two remain isolated from society leading a self-sufficient day-to-day existence. But when they’re discovered by the authorities and assigned to live a more “traditional” life, Will struggles to adjust while his daughter is intrigued at the prospects of a more structured existence and making friends. Will the twosome integrate into a “regular” lifestyle, or will Will’s pension for an isolated life away from the rigors of the world drive him away and pull his daughter from any chance for advancement?

Leave No Trace is a surprisingly powerful film with brilliant performances from its two leads. The film and its events are certainly thought provoking, and it’s sure to invoke different reactions from a wide array of viewers. Genuine drama and authentic portrayals of individuals under these circumstances make the film a strong one. 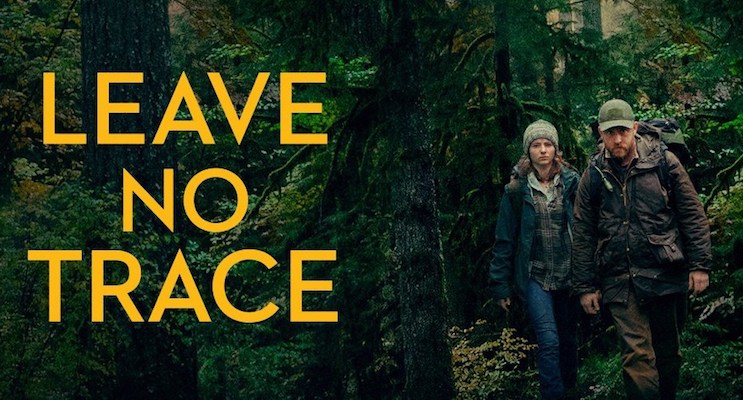 It’s tough to review Leave No Trace because there aren’t a whole lot of other films like it. Movies about people attempting to live off of the land with minimal involvement with outsiders aren’t exactly anything new, but it’s never felt more authentic and closer to the truth than it is here. Never does the film go over the top or attempt anything unrealistic. What happens in the film carries realistic consequences and reactions from onlookers and the others involved in the lives of our two heroes.

But it’s the actual performances from the two that make Leave No Trace as strong a film as it is. Will, played brilliantly by Ben Foster, is a man who fiercely cares for his daughter and wants to give her an education and a life free of what’s wrong with modern society, but he in turn wants nothing to do with the world and seems to refuse to give such a life a chance, even if it will benefit his daughter. Thomasin McKenzie similarly stands out as Tom, who finds herself curious about a life she’s never had, but finds herself torn between a world her father wants her to be a part of, and the one he essentially won’t give a chance or let her experience.

The reactions invoked by the characters are genuine and believable throughout. When Tom meets some other girls the same age as her for the first time, she’s understandably reserved and unsure how to express herself. When she attends a youth club for the first time, she’s clearly excited to be making friends, only to have it pulled out from under her by a father who’ll give his daughter an education in survival and academics, but not the social element someone her age is so desperately lacking. Will's scenes and disdain for other characters are equally impressive in this regard; perhaps his mistreatment from society as a Vietnam veteran and the loss of this wife (which is never explained in the film in detail) played a part into turning him what he is today.

The cinematography shows off beautiful natural, rural, and suburban locales alike, adding to the overall appeal of the film. This combined with the “low key” approach taken by the filmmakers makes the final product all the more appealing and interesting to viewers.

Leave No Trace is a fantastic film with great performances from its leads and a simple yet effective approach which isn’t afraid to shy away from more mature elements, yet manages to do this while maintaining a (mostly appropriate) PG rating. Definitely recommended.

DISCLAIMER: The images in this review are the property of their respective holders, including Bron Studios, First Look Media, Harrison Productions, Reisman Productions, Still Rolling Productions, and Bleecker Street. For promotional purposes only. All rights reserved.

Whitney - An Unflinching Look Back in ...