Home›Movie Reviews›Whitney - An Unflinching Look Back in the Life of the Legendary Singer!

Whitney - An Unflinching Look Back in the Life of the Legendary Singer!

Whitney is directed by Kevin Macdonald. The film features a combination of archival footage and new interviews with people in Whitney Houston’s life, including Bobby Brown, Cissy Houston, and Gary Houston.

Whitney is the story of legendary R&B/pop singer Whitney Houston, from her childhood as an aspiring vocalist, to her tragic death at age 48. The film covers all aspects of her life to her youth, her first record deal and taste of commercial success, relationships with her family members, her ill-fated marriage to fellow musician Bobby Brown, the birth of her daughter, and the struggles with addiction which would eventually consume her.

I’ll be the first to admit I’ve never been a die-hard follower of Whitney Houston’s music, even following her death, though I am a fan of a few of her songs (and following this film will probably seek out more of her catalogue). That said, Whitney is a revelation and a fantastic look back at this talented singer who won over a worldwide audience and the respect of fans around the globe, as well as her tragically premature death. Even if you’re not a fan you’re sure to be impressed by this story and the dramatic content which leaves virtually no stone unturned. 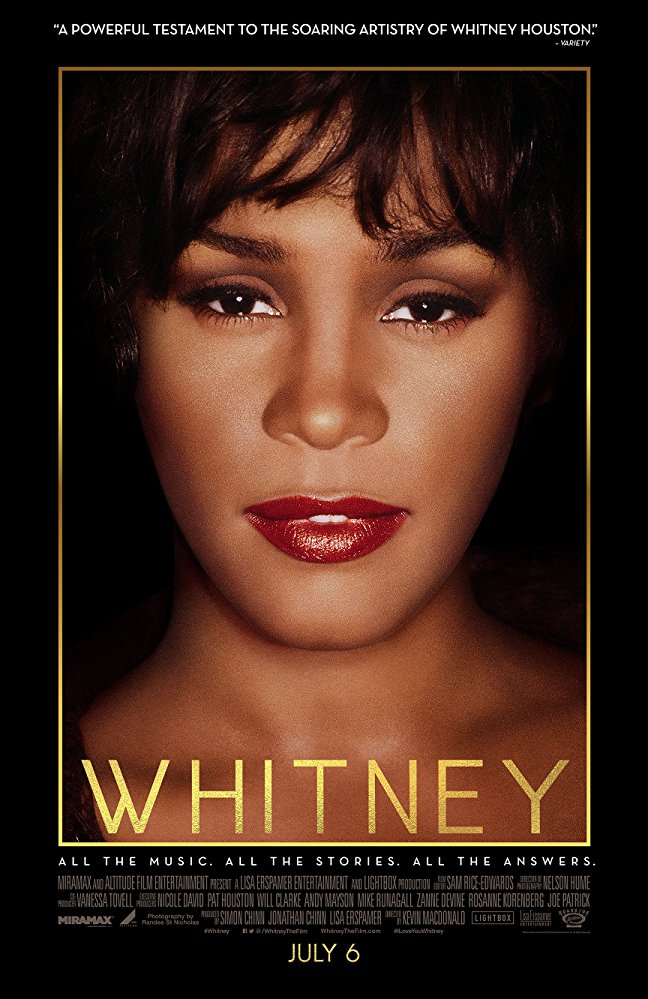 While Whitney certainly shows the singer’s triumphs, one of the greatest aspects of the film is it doesn’t shy away from the less-than-favorable moments in her life. While she climbs the charts and achieves numerous accolades, she comes under file from groups believing she has “sold out” in an attempt to sound more white/pop, and must deal with a husband clinging to her in an attempt to maintain his own dwindling popularity resulting in a disastrous marriage. Houston even found herself being sued for an outlandish sum of money… by her own father! There’s no shortage of drama here, and I applaud this film for not glossing over the tragedies and disasters in her life.

The footage used throughout the film is one of its greatest assets as well, including photographs and video from Houston’s young life, as well as music video and television clips, and even home movies. In this sense, Whitney does a brilliant job painting a picture of the life of its subject. I can’t say for sure how much of this footage was available to the public prior to the release of this film, but it’s unlikely this much material has ever been made available in one place.

Above all, the doc actually manages to keep the interest of its audience. When a documentary film hits the two-hour mark it needs to stay interesting to retain viewers. Fortunately, Whitney is enough of a revelation that even those who are only casually familiar with the singer will be impressed. It’s an unflinching, gritty, and thorough look into the life of a great pop vocalist. The film comes strongly recommended.

DISCLAIMER: All images in this review are the property of their respective owners, including Altitude Film Entertainment, Roadside Attractions, and Miramax. For promotional use only. All rights reserved.

Sorry to Bother You - Telemarketing, White ...