Home›Movie Reviews›Sorry to Bother You - Telemarketing, White Voices, and Stuff You Won't Believe!

Sorry to Bother You - Telemarketing, White Voices, and Stuff You Won't Believe!

Cassius “Cash” Green is out of work and desperately needs a job to pay off his debts and sustain himself. He gains employment at RegalView, a telemarketing firm. Despite a rough first few days, he quickly becomes a star salesperson when he begins using a “white guy voice” to win over his customers. As he rises up the ranks of RegalView, he finds himself conflicted between a loftier, better paying position with the company, or striking alongside his fellow workers who want more rights. Furthermore, he faces an even greater conflict upon seeing what the telemarketing elite at RegalView are selling… and there may even be a more sinister plan in place. 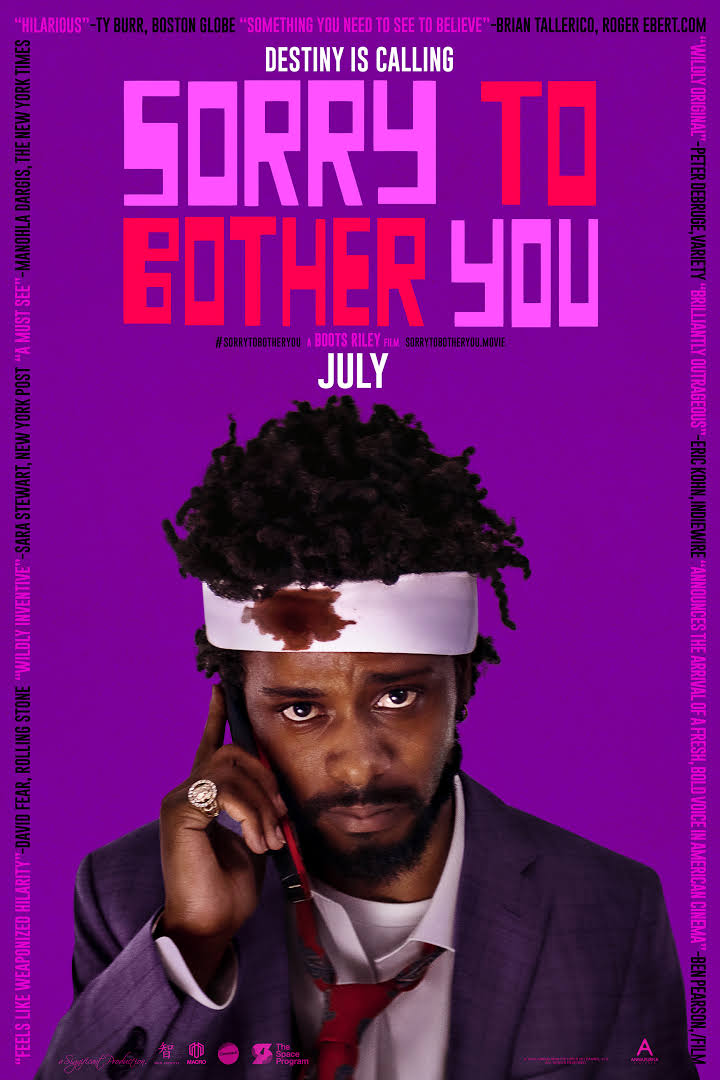 Sorry to Bother You is the directorial review from Boots Riley, who also wrote the film. I’ve definitely never seen anything quite like this film before… and that’s good in more ways than it isn’t. The casting in the movie is perfect, with star Lakeith Stanfield being a definite standout, and great supporting performances as well. The film is hilarious with a sharp script and original concept, but does tend to suffer in the third act when the premise goes completely off the rails with something no trailers or TV spots could possibly prepare you for. Until the concept gets a little too crazy and far from reality, though, Riley’s script is reliable and witty as hell.

Sorry to Bother You lets you know right from the get-go it’s not quite set in the real world. This enables Riley’s script to take on a life of its own without fear of alienating the audience, for the most part. Despite the originality, many plot elements feel familiar, including a character’s moral dilemma, and how far someone’s willing to go to get ahead in the world, though Riley's takes on them don't feel like other films you've seen. Originality definitely stands as one of the high points.

The casting is arguably this film’s greatest asset. Lakeith Stanfield is fantastic as Cash, who steals the show from start to finish. His interactions with other cast members are definite highlights, including the arguments with his artist girlfriend played by Tessa Thompson, or a senior telemarketer played by Danny Glover who introduces him to the “white voice” concept. Armie Hammer shines as the head of WorryFree, a client of RegalView who is offering what is tantamount to “slave labor.” Thanks to the superb casting every scene of the film is entertaining.

Okay, as much as I liked the film, the sad and simple truth is the big third act twist regarding WorryFree’s plans (I can’t go into more details here so as to avoid spoilers) pretty much tosses all semblance of reality out the window. I admired the first two thirds of the film for hitting close to home with plenty of commentary and issues which viewers can relate to in their everyday lives, even if it had a few minor over-the-top elements thrown in for comedy’s sake. Granted, the film remains funny even when it “stops being real,” but it loses something when it makes this transition.

Sorry to Bother You isn’t perfect; its third-act twist may be a bit much for viewers, this one included. But it doesn’t mean the movie isn’t funny thanks to its superb casting and writing. It's sure to end up a cult classic. Moderately recommended.

DISCLAIMER: All images in this review are the property of their respective holders, including Significant Productions, Cinereach, MACRO, and Annapurna Pictures. For promotional use only. All rights reserved.

Whitney - An Unflinching Look Back in ...