Across Los Angeles, many people are dog owners which causes their lives to intertwine. The cast includes a couple who’s recently adopted a child, a freeloading slacker playing in a band, women working in a coffee shop, a former football star, a man who pours his resources into running a shelter for abandoned dogs, and an aging widower who’s canine companion recently ran away. Over the course of several weeks, the dog owners cross paths, striking up friendships and relationships.

Dog Days has good intentions and an all-star cast, but the film is formulaic and overly sentimental. It doesn’t help that it tries to juggle far too many characters and subplots, many of which are only loosely connected. The dogs feel more like a plot device to connect the threads of standard, overdone human drama, than an integral part of the film. Furthermore, the movie's PG rating implies a family-friendly comedy, but much of the content is inappropriate for children, and kids will most likely be bored with what unfolds on screen when the canines are away. 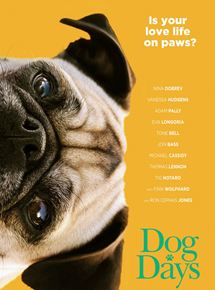 I will give the film credit for doing a good job in its casting, with plenty of good actors brought together, a few of which have surprisingly good chemistry together. To be fair, I wasn’t familiar with the majority of these actors, but they do the best with what they’re given. Disappointingly, funnyman extraordinaire Thomas Lennon is relegated to a supporting role, but his low-key “straight man” part is the highlight of the movie’s humans despite limited screen time.

Unfortunately, despite good casting, the plots and drama are generic by-the-book stories we’ve seen in a thousand movies before, and none of the stories are particularly interesting. The movie is predictable in its friendly and romantic conflicts, and while a few moments invoke laughs, these simply can’t win over the “been there, done that” feeling the movie conveys. The overload of actors and characters with numerous subplots means we never truly get to bond with anyone in the movie. With about two or three subplots/character arcs less, something more developed and fully realized could’ve been a reality.

The titular dogs are one of the biggest disappointments of the movie. Not the dogs themselves; they’re adorable, but rather, how the film uses them. The canines are essentially used for sporadic punchlines and to move the story along. Rather than focus on the dogs like should’ve been done in the first place, the movie goes right back to overly sentimental human drama which never stops trying to tug at our heartstrings. The overabundance of dramatic moments and lack of focus on the dogs ultimately harms the film.

Contrary to the movie’s PG rating, it is not appropriate for children. Some subplots and characters feel like they were designed with a youth audience in mind, but the movie features jokes about adultery and cheating, prostitution, drinking, being hungover, and even a rather sexist back-and-forth dialogue sequence which features the word “asshole” used on more than one occasion. Furthermore, the adult-catered plot elements involving romantic comedy and dramatic elements will bore children, who likely won’t care to watch what’s on screen when the dogs are away.

Dog Days has good intentions and plenty of cute canine co-stars, but they’re relegated to being devices to drive generic human-based drama stories. There are way too many subplots and characters which are largely one-dimensional and over-reliant on trying to give the audience “touching moments.” Furthermore, despite the PG rating, there is too much content which isn’t appropriate for younger audience, and kids will be bored when the dogs aren’t on screen. A rental for the curious when it comes out on video, but there are better movies to go see.

DISCLAIMER: Images in this review and the property of their respective owners, including LD Entertainment. For promotional purposes only. All rights reserved.