Though the title of The Meg may lead you to believe otherwise, it’s not a movie about Peter Griffin’s much-loathed daughter. A group of oceanic scientists is studying a newly-discovered layer at the bottom of the ocean, which they believe to be home to many undiscovered species which have remained unevolved and unchanged since prehistoric times. When a submarine crew is stranded on the ocean bed well below normal operating depths, following an attack from a mysterious creature, disenfranchised diver and sub pilot Jonas Taylor is brought in to lead a rescue effort. But will the rescue operation have unexpected repercussions for the waters of the world?

The Meg starts out as a borderline “thinker” of sorts, with a rescue operation of a stranded submarine crew and some fantastic, suspenseful sequences, as well as some solid performances from its cast, including a superb role from leading man Jason Statham, coming to terms with past demons from a former rescue op gone awry. The first half of the movie doesn’t need to resort to cheap scares or even showing the eponymous monster too often. Unfortunately, the experience basically goes off the rails and becomes an over-the-top action spectacle in its second half. At times the level of humor is excessive. Art house cinema this ain’t, but if you’re looking for a fun “popcorn movie” which will offer you two hours of quality, mindless fun, The Meg will fit the fill nicely. 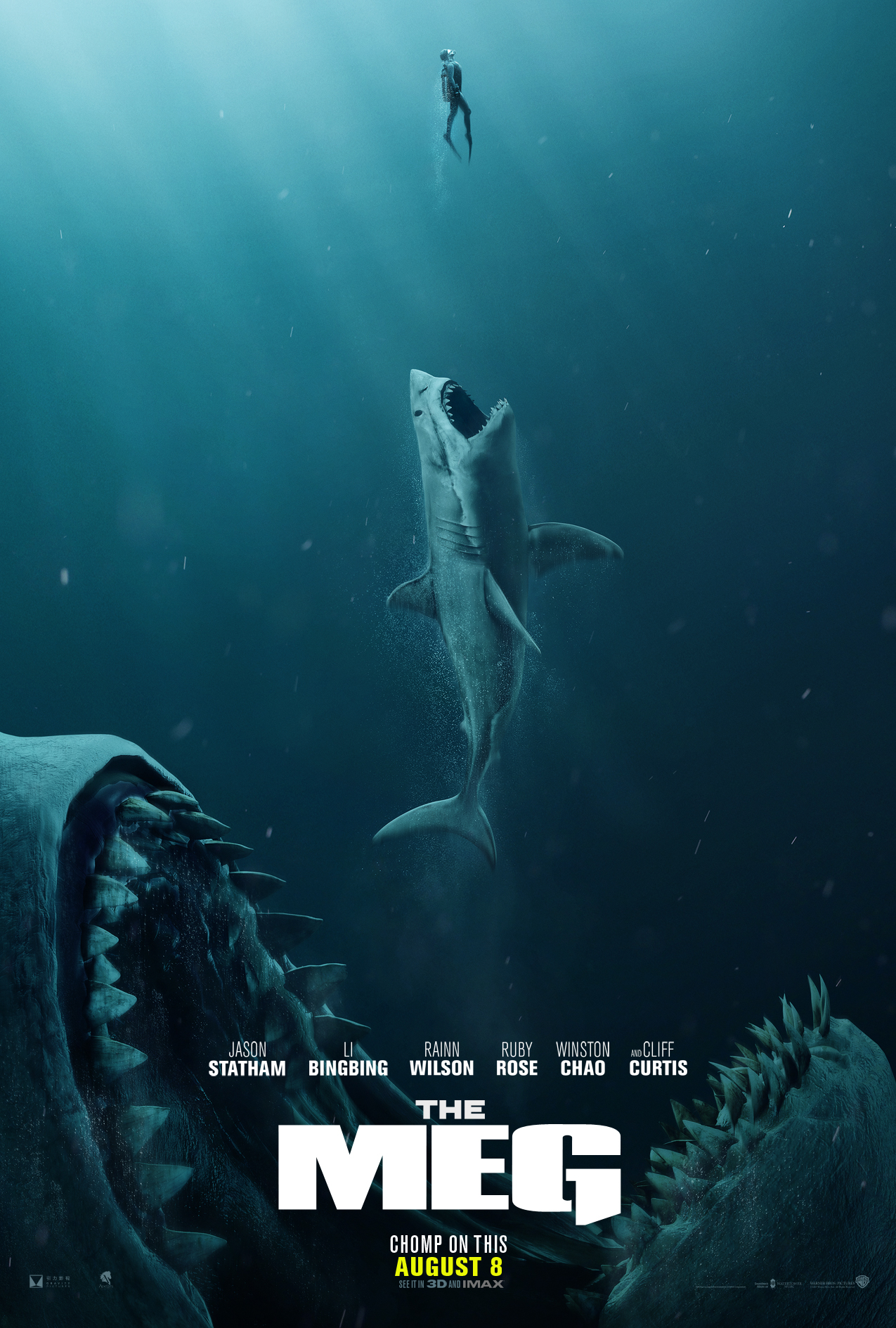 While the characters are largely one-dimensional stereotypes we’ve seen in these movies before, you can tell the cast is having fun with their roles. The obvious standout is star Jason Statham as Jonas Taylor, the rugged, roguish hero who gives the audience someone to root for throughout the experience, even if his backstory is one we’ve seen a million times before. Other roles include Li Bingbing as a mother who develops as unlikely bond with Jonas, Rainn Wilson as an investor more concerned with money and his image than other factors in play, Ruby Rose as a member of the oceanographic crew, and Page Kennedy as the source of much of the movie’s comic relief (the guy admittedly goes overboard with the humor, though I'd be lying if I said he didn't make me laugh). It’s certainly not a deep cinematic experience, but the cast is half the fun.

I’ll also give the movie credit for its first half, which manages to create a suspenseful, atmospheric mood without any over-the-top elements, and a true “race against time” feel to increase tension in viewers. Had the majority of the movie revolved around this rescue operation rather than having it serve as the intro to the rest of the film, in which any subtlety the movie once had is thrown out the window, odds are I’d be giving the picture a better review.

From there on out, The Meg becomes a watery bloodbath with plenty of unexpected action sequences, jump scares, the expected casualties, and general B-cinema stupidity. And yet, for what it is, it still manages to be pretty entertaining. There are heroic sacrifices, greedy characters who get a well-deserved comeuppance, and high stakes later in the film when a crowded beach full of people is in genuine danger. Obviously though, it's tough to go into further details without spoiling anymore.

We’ve seen the characters and these plot elements before. There are things that feel ripped off straight from other shark movies (you’ll totally know them when you see them), and yet, as a big, dumb, and obvious “popcorn movie,” it’s not half bad. It’s not likely The Meg is going to end up on my “Best of the Year” list, but if you want mindless sci-fi action entertainment, Mr. Statham and company deliver plenty of it here. Recommended, but know what you’re getting yourself into!

DISCLAIMER: All images in this review are the property of their respective copyright owners, including Warner Bros. Pictures, Gravity Pictures, Flagship Entertainment, Apelles Entertainment, Di Bonaventura Pictures, and Maeday Productions. For promotional use only. All rights reserved.

Phil X and the Drills, With Special ...