Home›Movie Reviews›Power of Grayskull: New Documentary Looks at the History of He-Man and the Masters of the Universe!

Power of Grayskull: New Documentary Looks at the History of He-Man and the Masters of the Universe!

Power of Grayskull: The Definitive History of He-Man and the Masters of the Universe (hereafter simply referred to as “Grayskull”) is directed by Rob McCallum and Randall Loeb. Interviewees in the documentary include actors, voice actors, artists, writers, toy designers, and many more.

In the 1980s, when Mattel’s sales were dwindling following some questionable business decisions, the company made a startling comeback to reclaim the action figure market with the arrival of He-Man and the Masters of the Universe. With the popularity of the toy line on the rise, an animated series hit the airwaves, followed up by the spin-off series She-Ra: Princess of Power, successful in its own right. These opened the gates for a live-action feature film adaptation which did not achieve the desired critical or commercial appeal. In time, oversaturation of the toy line disintegrated its prominence, but it made a comeback in the 2000s, and has retained a global fanbase over the years. The documentary breaks the franchise history down into manageable segments, discussing everything from the genesis of the toy line to its recent resurgence. 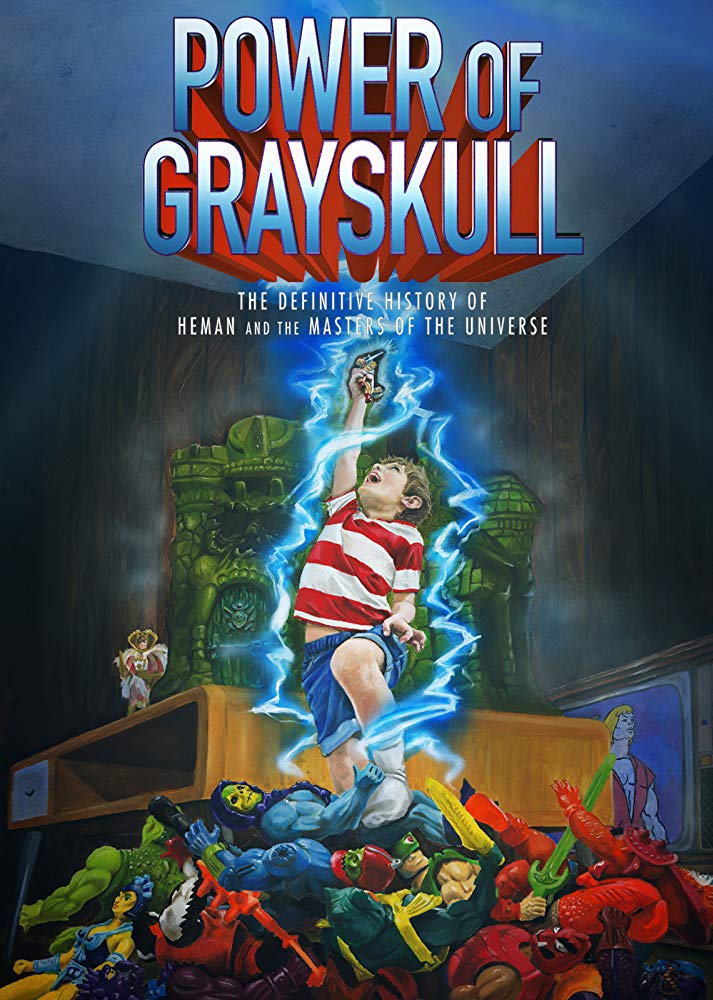 I’ll be honest; my knowledge of He-Man prior to seeing this documentary was fairly limited (I was born a few years too late to really be a fan during the franchise’s heyday), so I’m coming in with a lesser scope than someone who may already be a die-hard fan. That said, I found Grayskull to be a well-made doc chronicling the history of an iconic media franchise which has stood the test of time in the eyes of so many fans around the world. The film brings together countless interviewees, including everyone from fans/historians of the series to those who actually worked to bring it to life back in the day.

The structure of the documentary stands as one of its greatest strengths. Although I admit newbies will be hit with many persons and it’s a bit overwhelming to keep track of them all for someone who has no major prior familiarity with the series, the way the film is broken into different segments makes it fairly easy to follow, and it gradually builds up the franchise in an easy-to-enjoy way. Again, I don’t know how much new stuff die-hard He-Man fans will take away from this film they didn’t already know before, but for a relative newbie like myself, it was certainly enjoyable and informative alike.

There’s a diverse assortment of interviewees here, with the major highlights being Dolph “I Must Break You” Lundgren and Frank Langella, who played the starring roles in the 1987 film. One thing I particularly enjoyed about the documentary was that it didn’t always glorify the series, sometimes speaking brutally honest truths. One such scenario comes in the form of a female working on the series who was continually put down/unappreciated by her male colleagues; something frustrating in the working world we see to this day in multiple industries. Furthermore, those working on the series were often under the ever-watchful eye of “standards and practices” types, creating other obstacles.

Some of the most interesting scenes entail people leaving the franchise due to it becoming oversaturated, including recycling character molds to create many cheap, “new” characters which are essentially rehashes of older characters. The look at the feature film and its ambition coupled with what was ultimately a commercial failure during its initial release is a revelation as well. It’s interesting to note that a number of people once associated with the franchise have long since distanced themselves from it due to their past negative experiences, which is also explored here.

If you want to learn about the surprisingly interesting history of He-Man and the Masters of the Universe, Grayskull is a fantastic documentary; the latest in a long line of satisfying docs from the always-entertaining Rob McCallum. Definitely recommended!

DISCLAIMER: Images in this review are the property of their respective copyright holders, including but not limited to Rob McCallum Films, Pyre Productions, Mattel, and Cannon Films. For promotional use only. All rights reserved.

CONGRATS TO THE WINNERS OF OUR PARKWAY ...