Peppermint – Jennifer Garner’s Back, and She’s Out For Revenge!

Riley North enjoys a comfortable, suburban working-class life until her husband and child are killed in a drive-by shooting, and the guilty parties are dismissed by authorities supposedly due to reasonable doubt. For five years, she disappears off the grid without a trace, but returns with a vengeance, to go after the gangsters who took the lives of her loved ones. Battle-hardened and ready to exact her vengeance, her actions win over a surprisingly strong number of followers. But will she succeed in gaining her revenge, or will she meet her end at the hands of the gangsters, or the police now aware of her vigilante actions?

Vigilante movies are nothing new. Plenty of them come out every year. As I watched Peppermint I had that feeling of deja vu in which it felt like something I’d seen before. That said, while the movie largely is a cliche featuring scenes and plot elements done better in other films, there were a number of aspects which managed to win me over, including Jennifer Garner’s performance. It’s not a perfect movie by any means, but there are worse ways to kill 100 minutes. 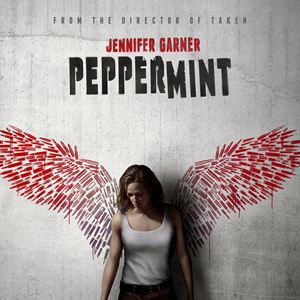 This is Jennifer Garner’s movie from start to finish, and in the scenes where she’s featured, she steals the show. The film does take a decent amount of time to establish her backstory by way of flashback, but it ends up working to the film’s advantage, and makes the loss which drives her to vigilantism all the more effective. Her transformation from loving wife and mom to a battle-hardened and morally-ambiguous warrior manages to feel believable, yet she still manages to retain her humanity throughout it all. Seeing the extent to which she’ll go to exact her revenge is half the fun, whether it involves a public hanging of the men who killed her family, dealing with the (presumably corrupt) judge who let her family’s killers go free, or confronting an old acquaintance who she didn’t exactly have a positive relationship with prior to her disappearance. If nothing else, no one can deny Garner kicks ass here. Figuratively and literally.

Unfortunately, other aspects of the movie don’t hold up so well. The police/fed characters feel like the ones we’ve seen in a million other movies. And how many damn films do we have to sit through that have the “double agent cop working for the villain” plot point? Even the gangsters tend to feel like one-dimensional stereotypes, and it doesn’t help that their supposedly untouchable leader resembles Freddie Mercury. For all the movie’s production values, it can’t rise above the tropes of an overdone genre. The fact that the movie pretty much ignores the five-year period during which she disappeared is a disappointment, as those years had the potential to be far more interesting than much of what made it into the film movie (interquel, anyone?)

It’s a cliche. You’ve seen everything here done better in other movies. And yet, Peppermint isn’t bad. Jennifer Garner will keep the audience’s interest throughout the film’s run time, and gets some solid action sequences. Moderately recommended.

DISCLAIMER: Images in this review are the property of their respective owners, including Lakeshore Entertainment, H. Brothers, and STX films. All rights reserved. For promotional purposes only.