Live… Here Comes the Night is a live release from Graham Bonnet, released in July 2017. The release is on CD, DVD, and Blu-ray Disc; this review covers the latter. The concert on the disc was recorded at the 2017 Frontiers Rock Festival.

Graham Bonnet has been making his presence known to the music world for over half a century. From his days as a pop singer in the late 60s to varied stints with Rainbow, MSG, Alcatrazz, and Impellitteri, plus tons of solo releases, the 70-year-old singer still has the booming voice that brought him fame in the rock and roll world.

Recent years saw the formation of the Graham Bonnet Band, teaming the vocalist with guitarist Conrado Pesinato, bassist Beth-Ami Heavenstone, and drummer Mark Zonder. They released their debut album in 2016 and have since followed it up. Live… Here Comes the Night is a live release which came out between the two studio recordings released thus far, chronicling the band’s performance at 2016’s Frontiers Rock Festival. I reviewed the CD version of this concert when I came out, but recently acquired the Blu-ray Disc. 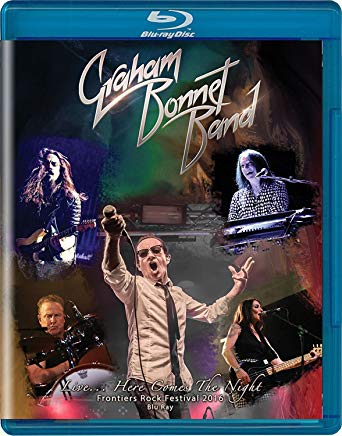 Considering Bonnet has played with so many prestigious rock and roll artists over the years, including the likes of Ritchie Blackmore, Michael Schenker, Yngwie Malmsteen, and Steve Vai, him setting up his own band certainly had a lot to live up to. The chemistry of the group would obviously make or break things, but I’m pleased to announce Bonnet’s in good company here. Brazilian guitarist Conrado Pesinato proves to be a definite standout player throughout the gig, which runs for about 75 minutes. The set combines classic tunes from all throughout Bonnet’s career, including “Since You Been Gone,” “All Night Long,” “Assault Attack,” “Dancer,” “Island in the Sun,” and “SOS.” For the most part, his major bands/recordings aren’t neglected, though it is disappointing to see "Hiroshima Mon Amour" from the Alcatrazz days didn't make the cut. It is, however, great to see a few “deep cuts” make the setlist, including the ethereal opening cut “Eyes of the World,” and “Lost in Hollywood.” There’s been speculation as to whether the release features overdubs/recorded vocals/etc., but honestly I don’t care even if this is true. The release sounds great.

The picture quality on the Blu-ray Disc is surprisingly good and sharp, revealing a substantial amount of detail and clarity throughout, only suffering in moments of low/poor lighting (but this is a common complaint of concert DVDs and certainly not limited to this release).

Where the release falters, however, is additional content. It’s a bare-bones disc with no bonus material whatsoever. There is a booklet with some photos, though oddly enough, most of the pictures in the booklet/on the package seem to be from a different concert, as the band members are wearing different clothes. A further curiosity is that keyboards are heard throughout the concert yet no keyboard player is ever shown/introduced, although the disc’s credits and booklet credit Jimmy Waldo, Bonnet’s old Alcatrazz bandmate. He's also on the cover of the case, oddly enough!

The bare-bones nature of the release is disappointing, but Live… Here Comes the Night is a great concert showing off the talent of one of the rock and roll world’s most beloved and infamous singers. For fans, this one comes recommended.