Jake E. Lee has long been one of the unsung heroes in the world of rock and roll, probably best known for his gigs with Ozzy Osbourne and Badlands. After a long absence from the industry, Lee made a return in 2013 with his new band, Red Dragon Cartel, and an album which featured several guest stars.

Despite the guest stars and a handful of decent cuts, the album was terrible, having more in common with late 90s-early 2000s “nu-metal” bands, though it did put him back in the public light for the first time in several years. Upon hearing Lee would be doing a second RDC album, I was curious but pessimistic. Would it be the album Mr. Lee needed, or a repeat of the misstep of the first effort? 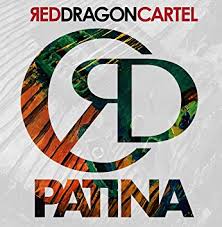 After one big strike against Lee with the first album being a scattershot disaster, the second album needed to be a hit. Fortunately, Lee and company have delivered. Patina is a kick-ass rock and roll record with a bluesy, and at times, grungy rock sound. It’s a much more consistent effort, from a group who has plenty of chemistry and musical talent. Not having an album that revolves around guest stars makes for a more consistent effort around a central band, and it’s one of the many reasons Patina puts its predecessor to shame.

Jake E. Lee is back and he’s kicking ass. Forget that dud of a first record; he’s in fine form with his new band, all of whom have chemistry and talent galore. These bluesy hard rock sounds must be heard; long-time followers of Mr. Lee are sure to love what they hear here. It’s uniquely his sound, yet feels totally new and original without being a retread of his earlier projects. Highly recommended!