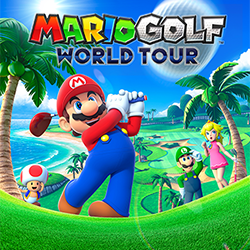 From the moment I got my first 3DS back in 2011, I had a craving for something that seemed like it would be insatiable for the longest time: a good, exclusive golf game for the system. Fast forward to early 2013 and suddenly I found out there was one coming, a new Mario Golf game no less. Well, after a massive delay that pushed the game’s original release date back to 2014, we ask the following question--was the wait worth it? Read on to find out.

Mario Golf World Tour plays similarly to any standard, arcade-like golf game complete with a power bar, and a three click system. In-game this is known as the “Normal” shot system. The game makes it easy to learn and has a slight difficulty curve when it comes to mastering this system. There’s an “Easy” shot system which reduces the three click system down to two, meaning you only need to worry about the maximum power of the shot as opposed to how accurate you are on the return. But for those who really want to get good at it and understand basic golf lingo, there’s a tutorial mode and even a golfing dictionary so you can understand the terms they’re talking about. In other words, it is a rock solid offering that doesn’t fix what isn’t broken when it comes to core mechanics.

The game offers several different modes and each one of them offers its own twist on golfing in its own way. Upon booting up the game, you are immediately presented with two modes. The first is Quick Play, which allows you access to Stroke, Versus, Online Tournament, and Coin Challenge. While I won’t pour over ridiculous amounts of detail about each mode that is available in the Quick Play menu, I can safely tell you that each one of them is insanely fun and offers its own take on hitting a round on the greens.

Then there’s Castle Tour Mode, where you basically use your Mii to become the champion golfer on three 18-hole courses. You can even explore castle grounds and talk to known Nintendo franchise characters, kind of like an RPG. This mode also serves as a tutorial and even decides to grant you access to a dictionary of sorts where you can look up all sorts of golf lingo, which I found very cool for those whom are genuinely curious about the game of golf itself. All the terminologies from that dictionary can actually apply to a round on the greens, which is pretty darn nifty to say the least.

It helps that there’s plenty of content in the game itself. With ten courses out the gate, there’s plenty to see and do in the game. Add in DLC and that’s the icing on the cake. The DLC thus far consists of all six original courses revamped and re-skinned from the original Mario Golf for the Nintendo 64; the music is completely intact and it’s catchy as all get out still even after all these years. My only caveat is that with three full, 18-hole courses that are modeled on taking a more serious approach with the game, and about 7 fantasy courses each with 9 holes, it feels like the initial content was kind of skimped on. Hence, in order to truly get the full experience, one would want to get the Season Pass which grants you access to all current and future DLC. Whether or not it’s worth getting the Season Pass is in the eyes of the beholder.

The graphics are bright, detailed and colorful. Very easy on the eyes with plenty to look at and see throughout. The courses offer a great variety of environments, from semi-realistic beachfront courses, to fantasy courses inspired by other Nintendo franchises featuring ridiculous amounts of pastel shading; in fact, the game run the whole gamut of environments, some with unique physics that obviously wouldn’t be possible in a real game of golf. But honestly, who plays Mario Golf for the realism anyway? Nah, this is all about pure fun, and the game definitely delivers that in spades.

But if you look past all the zaniness, this game delivers a solid game of golf that is easily accessible to everyone from rookies just hitting the greens for the first time, to veterans whom know the game inside and out. Mario Golf World Tour is an absolute blast that will keep you occupied for hours on end thanks to the many different game modes it has and the brilliant design of each course present in the game itself. The only flaw I can really think of is the fact that without the DLC, you have three 18-hole courses that have a more realistic approach, and seven 9-hole courses with a fantasy approach. Meaning at times the experience feels a bit on the incomplete side. Still, aside from that, it delivers that awesome golfing experience that many 3DS owners, including myself, have been craving.
Overall: 8.5/10

The Return of Legends: The Winery Dogs- ...