A tsunami wave swept through Las Vegas last week when the Crowd Surf America Tour came to The Hard Rock Cafe. The lineup brought Australian Metalcore heavyweights Capture the Crown and I Killed The Prom Queen over the Pacific to team up with Phoenix, AZ's own metalcore gem Blessthefall and a recently reassembled Chiodos. My focus on the show was immediately drawn towards I Killed The Prom Queen and Blessthefall once I saw they were a part of the tour. I Killed the Prom Queen have been on my watch list since they released a split with Parkway Drive back in 2003, and I've never heard of them playing in Las Vegas, so this was a can't miss. Blessthefall on the other hand, have been a that band that claws at my insides. With every opportunity I get to see them comes either financial or scheduling problems that cause me to miss the show. I was close to seeing them at Warped Tour 2013, but if you were out at The Silverton that day, you know the torture that the 120° heat had done on everyone. There was no way I could physically have seen them with out being another victim like the many that suffered from heat exhaustion on that scorching pavement. So, needless to say, at the end of the night I was definitely pulling out a pen to check off these two from the Bucket Show List.

With the crowd fresh off of the adrenaline from Capture the Crown, there was a sense of angst to get I Killed the Prom Queen out on stage to keep the energy going. The pit that was about half of the size of the floor was still cleared out, with the dancers from the previous set stretching, getting ready to throw it down again. Hearing every other conversation drop I Killed the Prom Queen's name gave me a hope that the lot of people were interested to see their live performance. With the flashlight flickers from the stage crew, the lights dimmed, and the beginning chords of "Beginning of the End" rang out. The start of the scream, "Please take me back to the start, where we still hold this close to our hearts", brought fists in the air and chanting coming from the crowd. With the guitar staying steady, singer Jona Weinhofen got out the lyrics "I knew you'll never die" in sync with the crowd as the breakdown kicked in with the drums and bass. From this moment on, there was not much stillness from the crowd until the next intermission. Moving in the order of their latest album, Beloved, they went right into another new song, "To The Wolves", keeping the crowd on their feet through it all. With some words from Jona next, thanking the crowd for coming out, and then saying the words that every fan of a band loves to hear,  "We're gonna play some old shit", they went into my favorite jam from the group; the intro track to their 2006 album Music for the Recently Deceased, "Sharks in Your Mouth". The crowds reception to this was the same as mine, and the pit erupted with fists and kicks flying everywhere.

Being the Generation X kid I am, I'm not a big fan of hardcore dancing. I like a good pit. Not being able to hold that urge to shove people, I held nothing back and worked my way through as many dancers as I could, disrupting the order of every thing that stood in my path. While this is usually met with a gang of kids trying to jump me, I was surprised to have so many people patting me on the back to give me props. It felt good to have some unity in the pits for a change.

The rest of the set was met with more songs off of their new album like "Bright Enough", "Calvert Street", and my favorite from the record, "Thirty One & Seven", but not before closing with the second track from Music for the Recently Deceased, "Say Goodbye"; the most fitting song I could think of to end the set with.

Everything I Killed The Prom Queen did during their set was as solid as their work on their albums. Between seeing Parkway Drive numerous times and finally seeing this performance, I'm convinced that something is in the water that is giving these Australian groups super-live-show powers.

With the crowd settling once more, it was time for Chiodos to claim the stage. With this being my first time seeing them with Craig Owens fronting the band, I was intrigued to see how the crowd would react. As soon as they hit the stage I was taken back by the response they had gotten. Everyone from 15 year old girls to tatted up 20 somethings were singing to every word. Be sure to get a more in-depth look at their set with ZrockR's own Stephy Hayward's review here, and also check out our interview with Chiodos guitarist Thomas Erak here.

By the time Chiodos was done, I had gotten a good buzz going from $4 PBR's and Fireball shots, and I was ready to tear it up for Blessthefall. The lights dimmed and a pre recording of "Exodus", the intro song of their latest album, Hollow Bodies, rang out with with a heavy snare and synthesizer, making me feel more and more exhilarated. When the instruments kicked in and the boys made it out on stage, it was complete pandemonium on the floor. Everyone pushed forward and threw their fists in the air, repeating the words, "You should be dead now, just like the rest!". I immediately went back into my own circle pit, yelling the words with Beau and Jared and rockin' my fist to every drum beat from Matt. 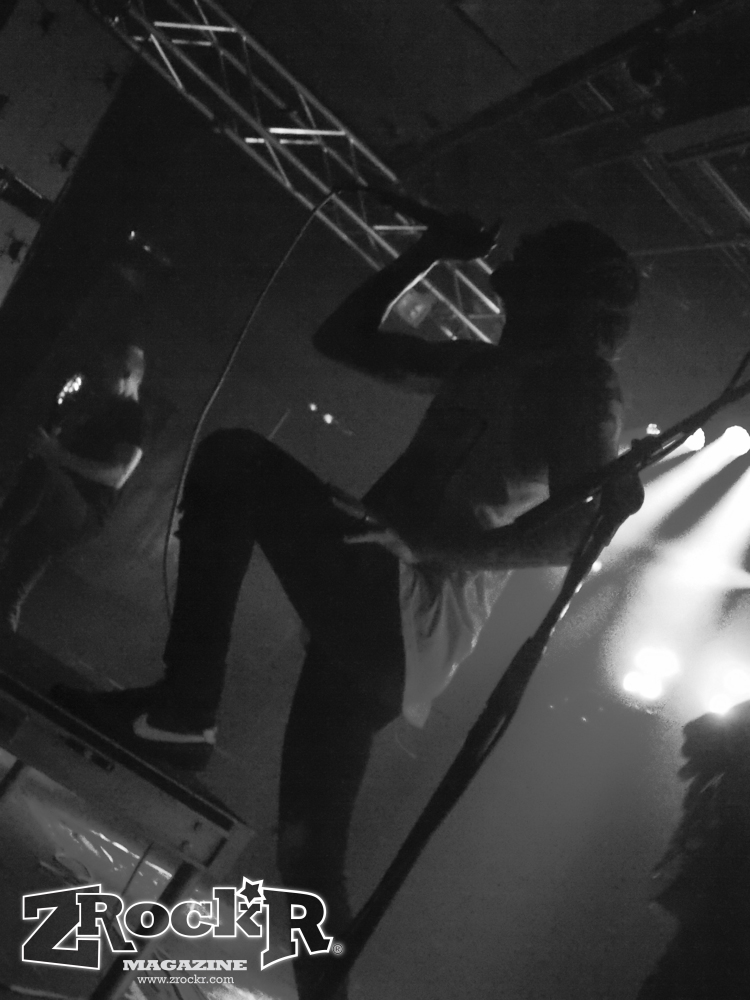 Working into the title track from their their latest album, Hollow Bodies, the crowd continued the organized chaos until the band took a break to give a shout to out the other bands on the tour and thank the crowd. After the break was one of the songs I had been waiting to scream live for a while, the intro track to the album Witness, 2.0. As soon as the instruments came, I rushed the stage, joining everyone in the chant, "Dead, we're not dead! We're not where you said! We're not dead!" 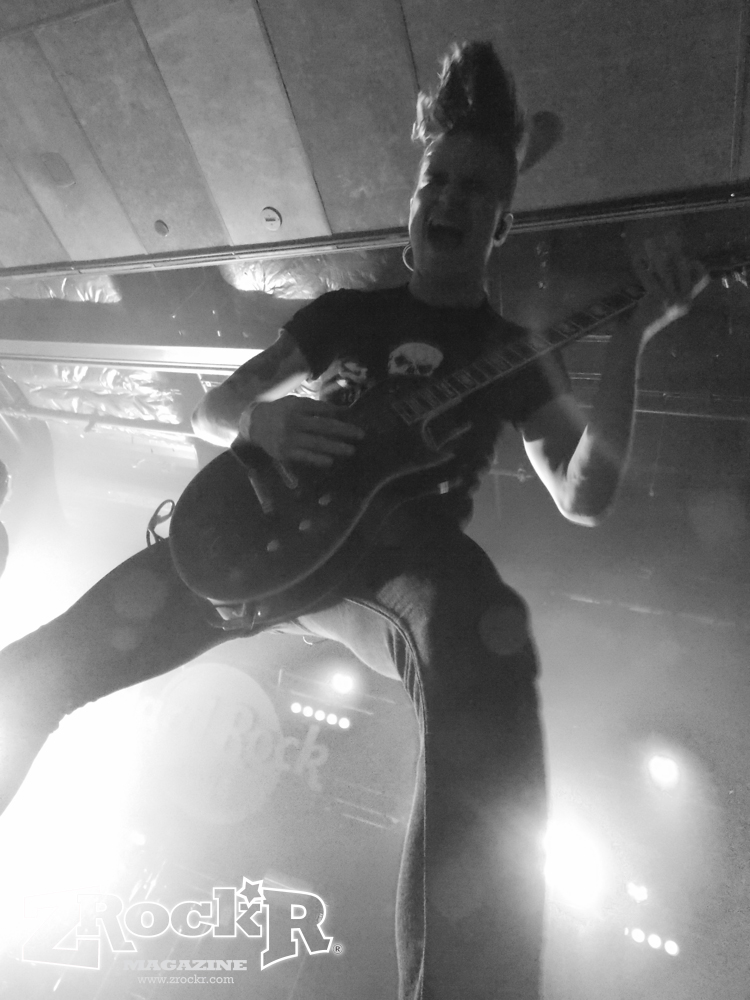 Properly following the album track list, they broke into "What's Left of Me" and encouraged my fist pumping and chanting to grow harder and louder. There have been many times where those two songs were the first things I'd scream on my drive, but seeing and hearing them live will always change the image I have singing those words. Next would come two more songs fromHollow Bodies, "Deja Vu" and "See You On the Outside"; the latter being one of the calmer parts of their performance with Beau doing most of the vocals in front of soft drums and calmer guitars compared to their usual crowd-movers. Later in the set I was surprised to hear the first song I had ever heard from Blessthefall, "Guys Like You Make Us Look Bad". The track was recorded original vocalist Craig Mabbit, and I had always assumed it had been locked in the vaults of their early days. Not having heard the song a while, it was gratifying to reminisce on my high school days when I had first discovered Blessthefall. 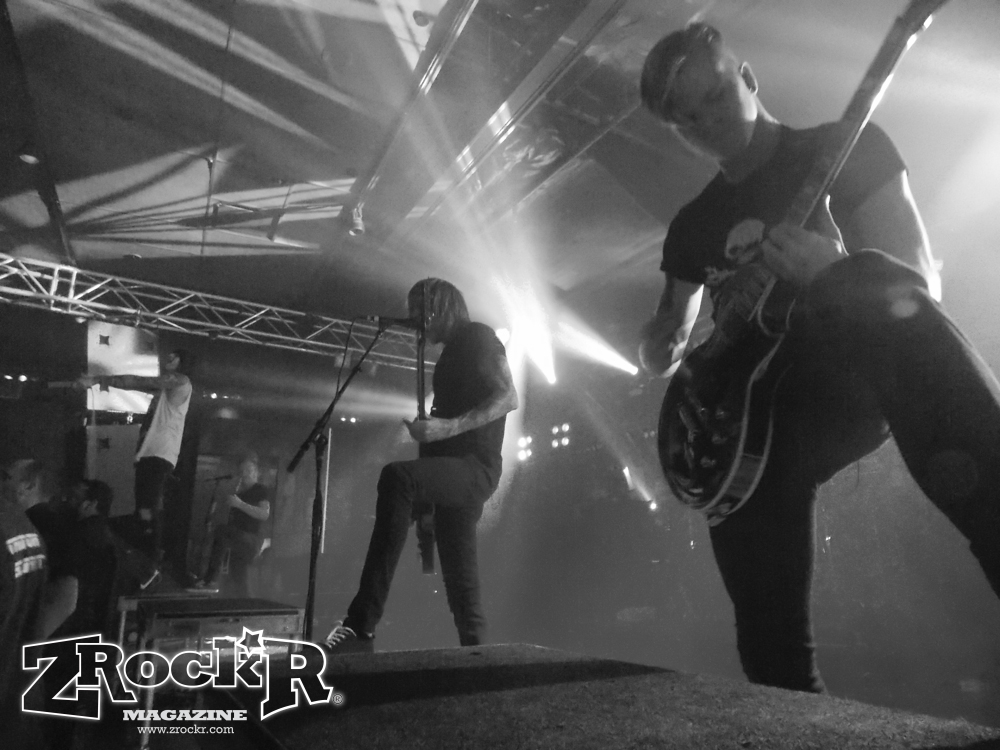 After playing another newer song, "Carry On", the band headed off stage and were immediately bombarded with screams for more songs.  They would not let us down, and came out for two more songs. First being "You Wear a Crown, but You're No King".  My exhaustion had limited me to regulating the pit during the entire song, but it was well needed after being beat up the entire night. The closing song would be one that I had waited for all night, "Hey Baby, Here's That Song You Always Wanted". Knowing that I had been satisfied with the night, I sang my way to the stairs and headed out to the lights of the Vegas Strip. 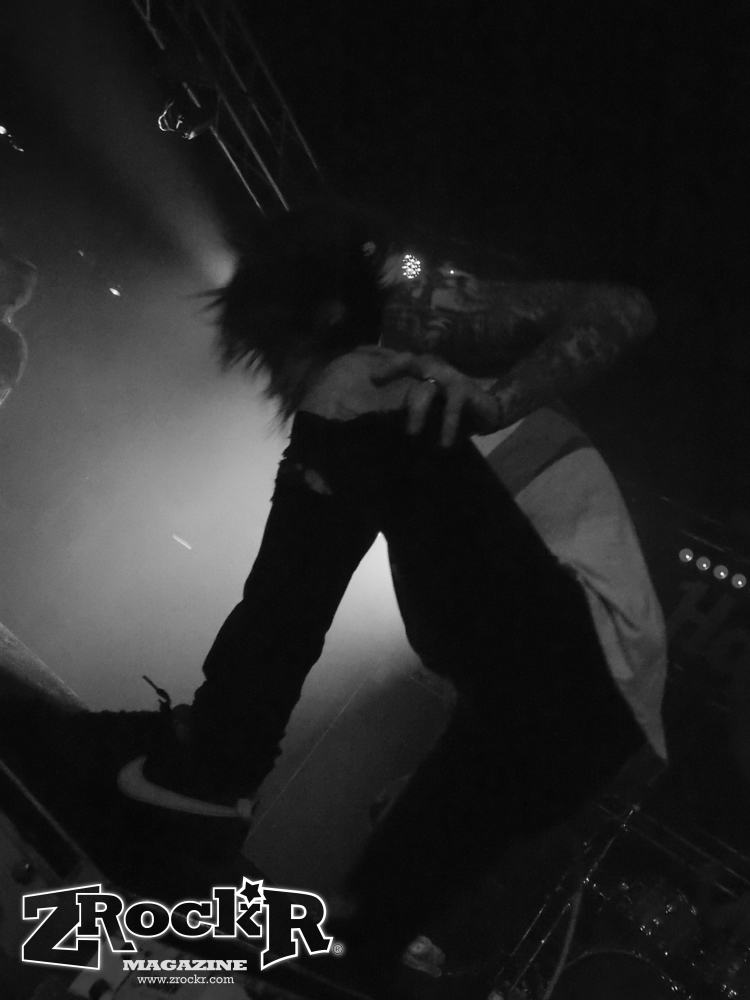 I had the left the show with nothing bad to say, which is rare these days. Knowing that I've been able to scratch these bands off my list, it does not mean it will be the last time we see each other.