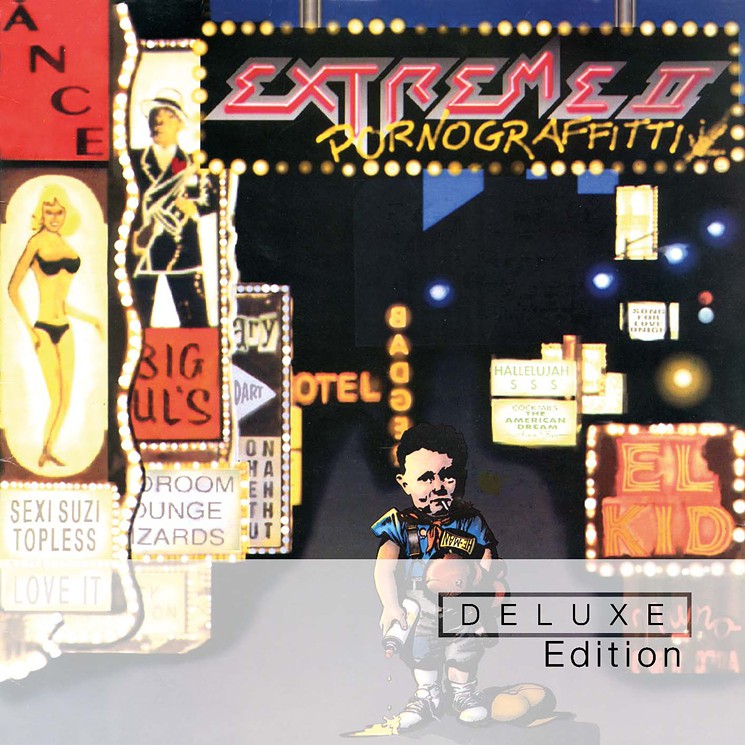 Extreme II: Pornograffitti was originally released in 1990. The Deluxe Edition was released in January of 2015.

Emerging in the latter half of the 1980s, Extreme was one of the most interesting bands of their era. From their debut album’s release in 1989, it became clear that they had a sound of their own, merging funk, rock, and everything in between. Their fandom remains strong to this day; with the group have reunited in recent years, continuing to record and perform for audiences.

The band’s best known and most beloved lineup, of course, is the one that recorded the first three albums, including vocalist Gary Cherone (who had a brief stint as the singer for Van Halen in the late 90s), guitarist Nuno Bettencourt, bassist Pat Badger, and drummer Paul Geary (who went into the music management business after leaving Extreme). This combination of musicians recorded the band’s classic sophomore album, Pornograffitti, which was released in 1990. The hit ballad No More Words helped this album to rise to the position of the band’s most popular release. With the release of this new Deluxe Edition, we must now ponder the question - how does this record hold up today, a quarter century after its initial release?

Not everyone is going to share the opinion of this being the definitive Extreme release, but it is their best known record for a reason. Sure, there are parts of the album that have not aged as well as others, but that does not mean this album is not a hell of a lot of fun to revisit all of these years later. The classic acoustic ballad More Than Words holds up just as well today as it did when it was first released, as one of the best tracks of its kind. Minor hit ballad Hole Hearted remains a beloved classic as well. The funk flavored rock of tracks like Decadence Dance and Get the Funk Out is catchy, even if feeling a little dated all these years later. On When I’m President, Gary Cherone is basically rapping in the verses, and it works surprisingly well. When I First Kissed You feels like a lounge song of sorts, and does a good job showing off the band’s musical diversity. Flight of the Wounded Bumble Bee is an amazing guitar instrumental, beautifully demonstrating Nuno Bettencourt’s position as one of the most underrated guitarists of all time (the instrumental is attached to the “He-Man Woman Hater” song on the album; not featured as a standalone track). This is a solid collection of tunes that remains the group's best known set of songs, and in the eyes of many a fan, their finest.

Sadly, the bonus disc, which was promised to include plenty of rarities, comes off as something of a half-baked disappointment. We DO get a few choice cuts here, including the rare B-sides Sex N Love and Nice Place to Visit. Most of the other tracks are fairly boring edits and alternate mixes (including FOUR versions of More Than Words… come on, really?) The problem here is that in Japan only following the initial release of Pornograffitti, there was a release entitled Extragraffitti, which contained a TON of rarities that are not included here. As the bonus CD is only 40 minutes long, there is no excuse for not including any of this other material. Rare demos, live cuts, cover songs, other original B-sides not on an album; that set was the mother lode, and makes this so-called “Deluxe Edition” seem horribly lackluster by comparison. Where is the cover of the Beatles’ Help!? Queen’s Love of My Life? KISS’ Strutter? This should have been a single-disc remaster with just the highlights from the bonus disc or a multi-CD package with all of the Extragraffitti rarities, not a half-assed compromise.

Extreme’s Pornograffitti is a great record and definitely an interesting time capsule of this era in the music world. The album is by all means worth owning, but this Deluxe Edition is a huge disappointment in that so many worthwhile rarities were omitted. If you already own a version of this album, it is not worth the upgrade. If you do not have it yet, the original single disc release is far cheaper and a better deal. Hopefully all of the rarities that SHOULD have been on here will get a legitimate American release in the future.

Something's About to Change - Robin Trower ...