Home›Preview›Rock in Rio Kicks Off This Weekend with No Doubt, Coheed and Cambria, Deftones, Linkin Park, The Pretty Reckless, And METALLICA (to name a few!)! ZRock'R Magazine with LV Rocks Radio Has YOUR Ticket Hookup with Benoic Ventures!! DO NOT MISS THIS!

Rock in Rio Kicks Off This Weekend with No Doubt, Coheed and Cambria, Deftones, Linkin Park, The Pretty Reckless, And METALLICA (to name a few!)! ZRock'R Magazine with LV Rocks Radio Has YOUR Ticket Hookup with Benoic Ventures!! DO NOT MISS THIS!

ROCK IN RIO KICKS OFF THIS WEEKEND! BENOIC VENTURES, ZROCK'R MAGAZINE AND LV ROCKS RADIO WANT TO GET YOU THE BEST TICKET PRICES AROUND! READ ON!

Want to go to Rock in Rio this weekend? We will be there!  Oh, so you think it isn't affordable? THINK AGAIN! We want to make sure you catch all the action and Benoic Ventures, an amazing travel company here in Vegas has your weekend and day passes to THE Festival of the year in the Vegas Valley! Give them a call at 702.410.2668 and tell them you want your pass for the weekend and that you found out about it from ZRock'R Magazine and LV Rocks Radio and you will be set to go!

Tickets for the Rock weekend with bands such as Coheed and Cambria, No Doubt, Sepultura ( featuring Steve Vai on guitar) and METALLICA are just $150 for the weekend! (the other guys want at least $298, but we have the hook up for you!) Don't miss out! Call Benoic Ventures TODAY and get your pass into an unforgettable weekend of some of the best hard rock and metal bands out there! May 8 and 9 are the dates for the rock weekend- that is THIS WEEKEND!  Next weekend May 15 and 16, will be all pop with people like Bruno Mars, John Legend and Taylor Swift and you can get tickets for the Pop weekend for just $180 for BOTH days!  Again, if you want to go, you have to call 702.410.2668, mention ZRock'R Magazine  and you will be set to rock (or dance) your ass off!

The line up is amazing to say the least!  Check this out!  Just to give you an idea of who is going to be there:

FOR THE ROCK WEEKEND - Announced Line Up (Just to name a few... )

FOR THE POP WEEKEND - Announced Line Up (Just to name a few...):

Benoic Ventures also have special packages for the weekend for hotel, transportation and extreme VIP packages!  More info at www.benoic.com and scroll down to Rock in Rio and click on the banner to take you to the page with all the details on those special packages you can only get from them!

Listen to ZRock'R Magazine LIVE!  Thursday night for your chance to win a weekend pass for THIS WEEKEND to Rock in Rio!  9pm PST on LVRocks.com!

( If you want to go to the Pop weekend,  Listen to Pop It Off with Lis on Saturday at 3pm PST on LVRocks.com for your chance to win a pair of tickets to next weekend's Rock (Pop) in Rio! ) 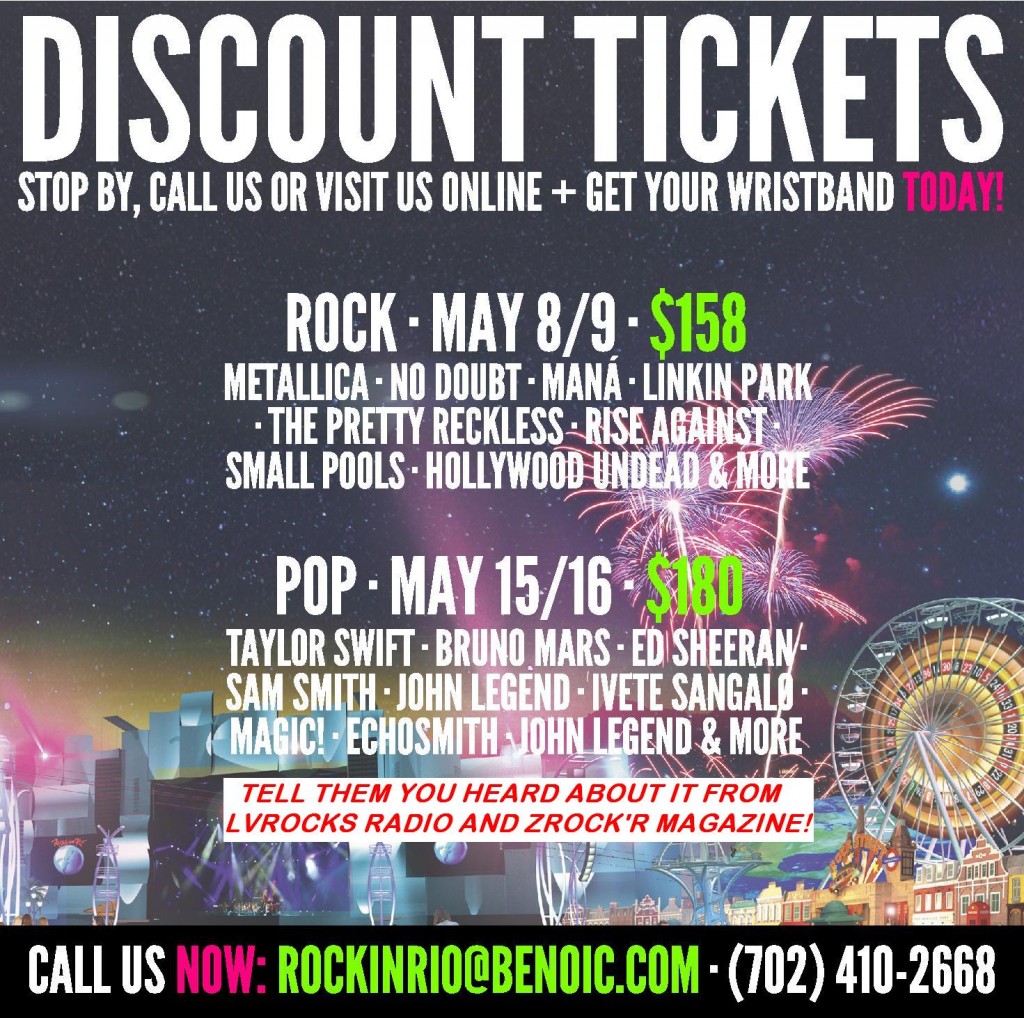