Home›Features›Kane Roberts - Looking Back at His 1987 Solo Debut!

Kane Roberts - Looking Back at His 1987 Solo Debut! 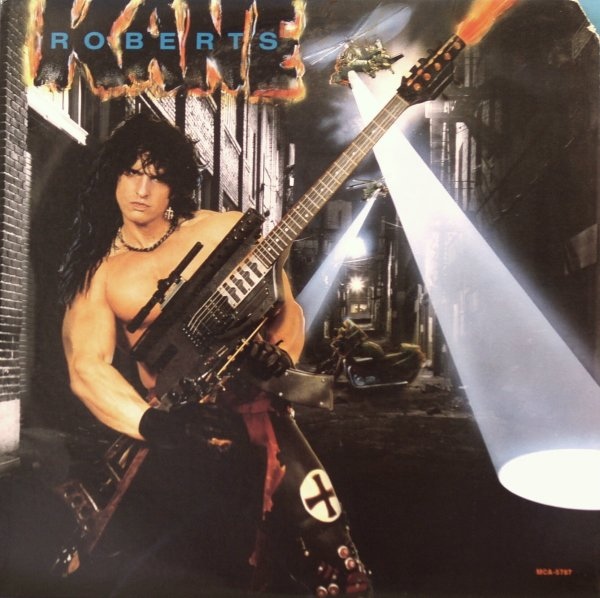 Alice Cooper faded into obscurity in the late 70s and early 80s amidst his struggles with addictions and rehab attempts, his experimental and bizarre albums during that era being largely forgotten by the musical public. It was 1986’s Constrictor, featuring hits like “He’s Back” and “Teenage Frankenstein” that made it his most popular album in a decade. But, in those hit music videos and in the songwriting credits, it was clear that this incarnation of Alice Cooper’s band had a talented performer and songwriter with a look and style all his own (and I am NOT talking about the bass player on the record, whose name happened to be Kip Winger!)

Anyone who has experienced the music of that classic Alice Cooper record knows that the person I am talking about is guitarist Kane Roberts. With his musclebound appearance and gun-shaped guitar, he was every bit as much the center of attention as Cooper himself at the shows from that period. But, many people are not aware that Roberts has had a career outside of his all too brief tenure in the Alice Cooper Band. Following Constrictor’s release in 1986, Roberts recorded his first solo album, which was released the following year. Teaming Roberts up with Steve Steele and Victor Ruzzo, the record featured co-writing credits from Alice Cooper bandmate Kip Winger as well (keep in mind this was a good year or so prior to the Winger debut’s release). The legendary Michael Wagener was even in the producer’s chair for the recording of this album. And of course, who could forget the classic cover art, with Roberts wielding his gun guitar, and spotlights on his trail in the background?

While Roberts had an amazing sound and a look that was truly unique, his solo career, sadly, never really took off. He even took a long hiatus and changed careers following his second solo album’s release in 1991, becoming a graphic designer and video game programmer (although the public would argue that in his 80s heyday on stage this guy looked more like a video game character!) Eventually Roberts would return to the music business; he is currently serving as a counselor at Rock and Roll Fantasy Camp, and released a compilation album of previously unreleased songs in 2012. But, Kane Roberts’ self-titled 1987 solo debut is where his career away from the Alice Cooper Band got its start. How does it hold up all these years later?

Many have called the debut from Kane Roberts clichéd and over the top, and that it is an uneven release that tries to accomplish way too much in its fairly brief duration. They would not be wrong, but those factors certainly do not make Roberts’ first solo record any less entertaining. This album is a grab-bag of sorts that throws in everything but the kitchen sink. There are straight up hard rockers, more melodic songs, pop-rockers, ballads, and everything imaginable in between. It is not a perfect album; many would argue that his 1991 follow-up, Saints and Sinners, is the superior record of the two. That is not to say his debut is not essential listening for any fan, though.

What really surprised this fan is just how solid every song sounds. Roberts proves himself to be a surprisingly good vocalist, and his vocal style works just as well on a hard rocker as it does on a ballad. Truth be told, the ballads on this record are better than most of those being released by similar artists at the time which had far greater success on the charts. Keyboard usage is plentiful on the record, but the album still manages to maintain a harder edge than many of Roberts’ peers of the era. In fact, I can say with all sincerity that there is not a weak track on the record; highlights are abundant and a listener is never going to be bored at any point. A good portion of the sound on the album is a mixture of melodic, and heavy alike; I would compare much of it to Bon Jovi’s criminally underrated sophomore album, 7800° Fahrenheit.

Kane Roberts’ solo debut is a record that never got the credit it deserved. Sure, it is bogged down in many of the 80s clichés and feels a bit dated, but the album is still far better than much of what was being turned out by other artists at the time. The album was recently given a CD reissue after being out of print for many years. For any fan of classic 80s hard rock/glam style rock, this album comes strongly recommended!