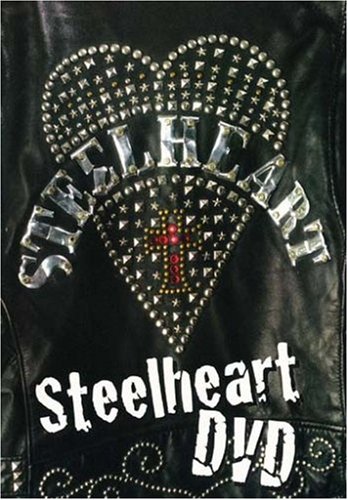 Still Hard is a DVD release from Steelheart.

Steelheart is one of those bands that recorded some fantastic rock and roll, but it was too little too late in a world of changing musical trends. Fronted by Croatian-born vocalist Mili Matijevic, the group was formed in Connecticut in 1990, and brought together some of the most talented musicians of the era. Their 1990 debut album showed great promise, and even scored the group some hit MTV videos. Even with musical trends changing, the group has endured and pushed on in varying incarnations.

Steelheart still performs to this day, though Matijevic remains the only original member still in the group. Over the years, the group has recorded countless concerts, music videos, television appearances, and the like, but had not put the material together on a home video release. That is, until now. Still Hard is the band’s attempt to create the definitive collection of all Steelheart video content, on the DVD format. 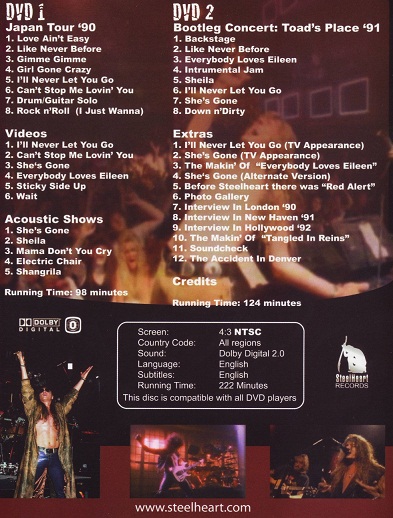 The back of the DVD case details the contents. You get nearly four hours worth of content in this two disc set!

For years, Steelheart fans have been clamoring for a release like this, combining the bands music videos, recorded shows, TV spots, interview spots, making of featurettes, and more. How does the content on this disc stack up, and is it the definitive Steelheart DVD release fans will want to get their hands on? Take a look and find out what the disc includes!

-Japan Tour ’90:
Probably the big highlight in the DVD collection, this is a vintage, professionally shot show from the band’s heyday, playing to a large audience on a Japanese stage. The band is on fire here, in their element and playing all of the classic hits from their debut album. The show lasts for roughly 45 minutes, and is essential viewing for any Steelheart fan.

-Videos:
A collection of promo videos, mostly from the first album. These are the ones you remember seeing on MTV back in the day. The only issue I have with these videos is that subtitles featuring the lyrics to the songs are included on the disc, but they are turned ON by default, and because each video is considered a separate track, you have to turn them off after each one. That is an annoyance, but it is still good to have the vids in one place!

-Acoustic shows:
This segment consists of three songs done on a Hong Kong stage, and two recorded on a television show (apparently an Asian TV show based on the audience). Mili is a multi-talented individual on the musical stage, and getting to hear these songs done in a stripped down setting is especially interesting for anyone who is a fan of the group.

-Bootleg Concert –Toad’s Place ’91:
Similar to the Japan Tour show on the first disc, this is a recording of a vintage Steelheart show that is roughly 45 minutes long. This one does not look as good as the other show visually, due to the handheld bootleg filming style, but it has a more “personal” feel to it, as you see the band exiting their limo and heading through backstage to reach the actual performance area, and even signing autographs for the fans. These little nuances help this particular show to stand out, and will make it all the more appealing to the fans of the band’s heyday.

-Extras: TV Spots/Interviews/etc.
All the other video content that would not fit under any other category on the disc gets lumped in this, the lengthiest section on the disc. You get to see a number of early television appearances from the band, interviews, photo galleries, sound checks, and more! Fans of the group are going to find plenty of rare material in here to satiate their cravings for all things Steelheart, but the disc should have included a "play all" button for this content.

The audio and video on the disc are solid, though do not expect sonic audio quality and a razor sharp picture. Presumably, everything here is sourced from the best elements possible, but that does not always mean much when it comes to older material such as this. That said, overall the production quality on the disc is more positive than negative; it definitely puts old VHS tapes and bootlegs of the band to shame. Menus are easy to navigate as well.

A word of warning to anyone considering buying this DVD – ONLY purchase it from the band. Other websites (including eBay and Amazon) have independent sellers that are charging outrageous, outlandish prices for it. Do not be deceived by these sellers! When I purchased mine at a recent gig from the band it was (I believe) $25. Do not pay more than this; buy it direct from the band only!

Steelheart was one of the most underrated bands out there and is still going strong in their current incarnation. This disc is worth owning if you are a fan of the group, but again, make sure you are buying it direct from the band!

Kane Roberts - Looking Back at His ...