Home›Features›The Legend of Zelda - A Look Back at Nintendo's 1989 Animated Series!

The Legend of Zelda - A Look Back at Nintendo's 1989 Animated Series!

In 1989, Nintendo brought what would become one of its biggest franchises to the world of animation – The Legend of Zelda. The series aired concurrently with The Super Mario Bros. Super Show, with a Zelda cartoon airing on Friday in lieu of the Mario cartoon that would air Monday-Thursday.

There have been numerous retrospective reviews covering Nintendo’s cartoons over the years, many of which have not been kind to this series. Are the detractors right, or is this an underrated piece of animation that is worth revisiting for longtime fans of Nintendo and/or The Legend of Zelda series? 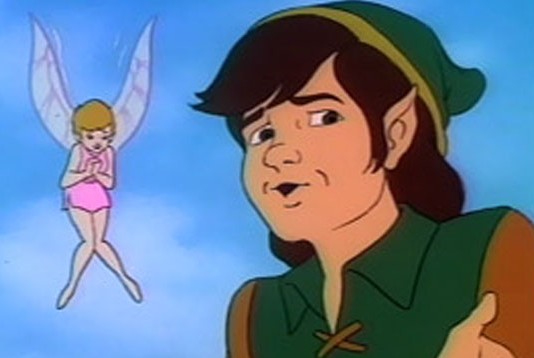 This was one of the first attempts by Nintendo to animate a classic franchise of theirs. It is also one of the very few productions in which Link speaks.

Set in the medieval/fantasy realm of Hyrule, The Legend of Zelda animated series focuses on Princess Zelda and kingdom hero/bodyguard Link, as they fight against the monsters controlled by the evil wizard Ganon and his devious schemes to try to steal the kingdom’s greatest treasure, the Triforce of Wisdom. Meanwhile our heroes must fight back and try to reclaim the Triforce of Power, which is in Ganon’s possession. Supporting characters include Spryte, Zelda’s fairy companion with a crush on link, and her father, King Harkinian.

The Legend of Zelda cartoon has been bashed by longtime Zelda series fans over the years. And let’s face it; Link constantly trying to get a kiss from Zelda (and being predictable interrupted) and his catchphrase of “Excuuuuuuuse me, Princess!” gets old very fast. But one must keep in mind what limited resources the creators of the show had to work with. If you can overlook the problems, it is a show that is quite enjoyable and worth revisiting. 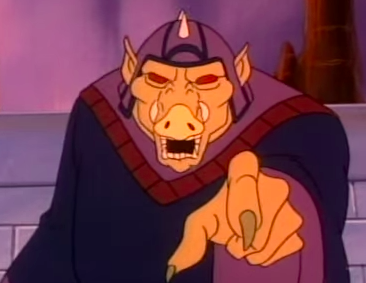 The show is comprised of the following episodes:

"The Ringer"
When Zelda hosts an amateur magician contest, Ganon enters in disguise, with his sights set on stealing the Triforce of Wisdom.

"Cold Spells"
Things go awry during spring cleaning around the castle, and Ganon is looking to take advantage of the distraction.

"The White Knight"
Zelda is swept off her feet by a handsome prince from a neighboring kingdom, much to Link’s dismay.

"Kiss'n Tell”
Link is transformed into a frog-like creature as a result of one of Ganon’s schemes, and the only cure is for him to be kissed by a princess.

"Sing for the Unicorn"
When Ganon invades Hyrule using a mysterious white unicorn, he kidnaps King Harkinian. Link and Zelda team up with the unicorn’s rightful owner to save the king.

"That Sinking Feeling"
Ganon uses a powerful magnet to pull Hyrule Castle down to the underworld, where he can easy get the Triforce of Wisdom.

"Doppelganger"
Using a magic mirror, Ganon creates an evil duplicate of Zelda in an effort to steal the Triforce and throw off Link.

"Underworld Connections"
The Triforce of Wisdom is split into three pieces, with two of them ending up in the underworld. Link and Zelda must go and retain the other two pieces before Ganon gets them.

"Stinging a Stinger"
Link is tricked by a conman into taking an inferior sword. Said conman then takes his sword and tries to sell it to Ganon.

"A Hitch in the Works"
Link hatches a plot with the castle handyman to create fake Moblins to kidnap Zelda, allowing Link to save her and to get her to fall in love with him. When Ganon’s real Moblins show up, though, things do not exactly go as planned!

"Fairies in the Spring"
King Harkinian is building a water park so that his people will be able to keep cool in the hot summers. But when he is captured by mysterious monsters not belonging to Ganon, it is up to Link and Zelda to investigate.

"The Missing Link"
While protecting Zelda in battle, Ganon uses a mysterious weapon that can capture a person and trap them in the underworld. Link is struck by the blast, with his body being trapped by Ganon, but his spirit remains intact in Zelda’s company, resulting in the two of them paying a visit to the underworld so Link can reclaim his body.

"The Moblins Are Revolting"
Ganon’s minions are tired of his mistreatment and his failing plans, so they steal Ganon’s newest weapon and imprison him in a bubble in a bottomless pit. They then launch their own offensive against Hyrule Castle.

As you can see, the episode plots are fairly redundant and formulaic. There is no real character development, so the episodes can be viewed in any order. 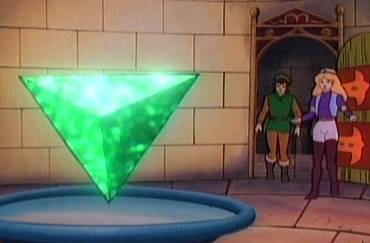 The show's version of the Triforce of Wisdom.

People are quick to bash the faults of this series, namely the aforementioned “interrupted kiss” and “catchphrase” scenarios. But despite this, there is more good than bad here, and the show is worth going back and watching at least once for a fan.

One thing people do not seem to realize is that the makers of the show only had access to two games at the time, and neither one of them was very heavy on storyline elements, outside of what was printed in the instruction manuals and shown in the “Engrish” opening crawl text sequences of the games. Due to a fair lack of story and development elements like this, the show’s creators largely had to improvise.

I was actually quite impressed by how many elements of the game the writers/animators/etc. managed to work into the show, and usually quite well. You have classic monsters and boss enemies, the various hidden underworld entrances, music and sound effects from the games, and Ganon who looks true to his game counterpart and even teleports around the lair like he does in the final battle of the original game. Hell, they even managed to find a way to explain Link being able to carry large bundles of weapons and items! The relationship and banter between Link and Zelda is actually surprisingly entertaining, if you can ignore those two annoying elements I mentioned earlier. 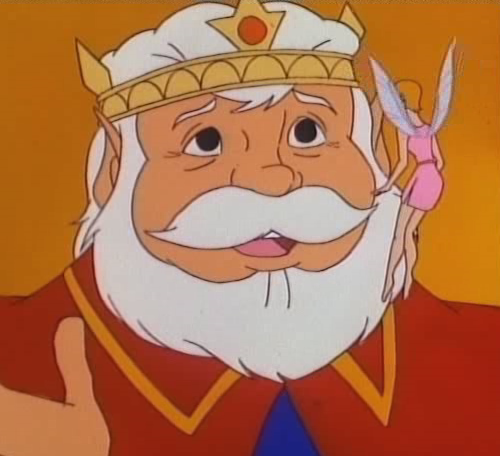 King Harkinian is one of the characters made up for the show.

The show, as it was aimed at children, is fairly tame when it comes to the violence. Link does not stab at anyone with his sword, instead the beams he fires from it strike the enemies and trap them in Ganon’s “Evil Jar.” There is also quite a bit of humor, which does go overboard at time, though not to the extent of what we see in some of the other Nintendo cartoons of the era. There still manages to be a decent amount of action and adventure, and the writers did the best they could with a 15 minute or so run time.

When you have two games with next to nothing as far as story within the games go, you do the best you can, and that is what the crew of The Legend of Zelda did here. There were only 13 episodes, and while some certainly are better than others, none of them are outright bad.

The show first aired in 1989, with a few episodes getting VHS tape releases over the years. Shout! Factory issued the series in a DVD set in 2005, and it was reissued in a budget package a few years later. Some of these packages include some bonus material, though there is nothing too super interesting as far as this is concerned.

Old school Nintendo fans will want to check out The Legend of Zelda animated series, though should also keep their expectations in check. It is a fun one to revisit all these years later, even if it shows it age.

Pride and Prejudice and Zombies - A ...