Nearly three decades have passed since the Battle of Endor. Princess Leia has been doing her part as a member of the New Republic’s Senate in an effort to keep democracy in a post-Imperial galaxy. But the fragile peace is shaken by a two-party political system, with debate and strife between the Populists, a group that wants individual planets to maintain their own authority, and the Centrists, who believe in one body that rules over all worlds, with Leia serving on the former side. When the Senate catches wind of a plot involving gangs and money being used to fund a mysterious, deadly army, it is up to Leia and her most trusted advisors to investigate the manner, even if it means joining forces with a Centrist Senator obsessed with collecting memorabilia from the old Galactic Empire. The peace and Leia’s role as a part of it are further shaken by the presence of the terrible truth of Leia’s natural parentage and the identity of her biological father.

Bloodline is not a perfect Star Wars novel, but there is certainly a lot to love about it. Set in the years before Episode VII, it does a good job giving some background to the world that we see 30 years following Return of the Jedi’s events. A more politically driven plot helps this one to stand out amongst other books that focus on the Force, lightsaber battles, and military combat. Written by Claudia Gray, who released the superb Lost Stars last year, this book gives us an interesting look into the more political side of the Galaxy Far Far Away, and certainly does a better job of it than the Prequel Trilogy did. Just know that you are not getting a novel revolving around the Jedi or Sith here. 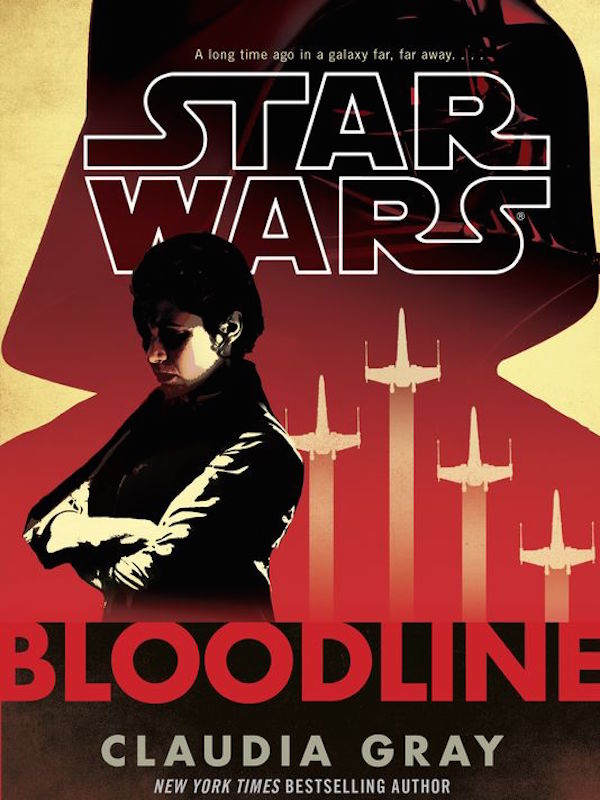 Bloodline is a Star Wars novel set in the Sequel Trilogy era, written by Claudia Gray.

Princess Leia has long been one of the most beloved and admired Star Wars characters. I found her Marvel Comic series to be more than a little underwhelming compared to most of Marvel’s other titles, but she has been well written in a number of the other more recent novels. Claudia Gray is a fantastic writer, and continues to make her talents known with the release of Bloodline. Her Leia is one of the best written of the canon universe to date, and she deserves major credit for painting Leia as a well-meaning but flawed character struggling with her demons, inside and out.

Admittedly, the supporting cast does not fare quite as well as everyone’s favorite Princess of Alderaan, but there are a few stand-outs, most notably Ransolm Casterfo, the Centrist Senator who plays a substantial role in the story and becomes something of an unlikely ally and foil to Leia. The dynamic between the two characters makes for some of the most interesting scenes in the novel, and their friendship is certainly pushed to the limit in the latter third of the book. There are many people serving Leia and a number of political characters on both sides of the coin. Some of the characters serving Leia get some light development and come off as endearing and entertaining, but you will wish they had their own story, rather than playing second fiddle to Senator Organa. The various Senators and other characters are far too great in number and end up bogging the story down somewhat.

Building on that last point, am I the only one who is getting a little overwhelmed by all of the new species that have come to exist in the Star Wars universe? Novels that introduce characters/species/etc. should include illustrations of what these species/characters look like, so we can make a better mental picture there, this being a prime example of a novel that would have been beneficial for.

Despite some characters coming off as underdeveloped and less than interesting, the central plot point here is the drama and occasional action involving Leia and her team. We get an idea of her mindset as she does her part to help develop the New Republic, but she knows that her efforts are not worth what they may have been years ago, and that there could be an impending new conflict on the horizon. There are a few premonitions of what is to come in Episode VII, but overall this does work quite well as a standalone story set in the Sequel Trilogy time frame. We do hear about some familiar characters, though not many of them actually make active appearances; this is for the best since it is Leia’s story first.

The plot regarding investigating the mysterious activity and spending going on is quite interesting unto itself, but I truly wonder if the novel could have worked without this and focused more of the political elements of the Star Wars universe; I found myself all the more intrigued by those elements as I read Bloodline. It is highly likely the two party political system and attempted cooperation of the parties will hit close to home for a number of readers. Likewise, it will be interesting to see as well if these themes are explored more in depth and thoroughly in future Star Wars novels.

Bloodline is another winner of a Star Wars novel from Claudia Gray, painting both a solid picture of a pre-Episode VII Star Wars galaxy, as well as a look at the more political part of things. This one gets a strong recommendation.