One of Germany’s greatest heavy metal bands, Accept has been going strong with new vocalist Mark Tornillo in recent years, a worthy successor to the mighty Udo Dirkschneider (who himself is currently doing a solo “farewell tour” to the music of Accept). To date with Tornillo at the helm, the band, which still includes classic members Wolf Hoffmann and Peter Baltes, has released three studio records, and a fourth is on the way. Clearly this is a band that shows no signs of letting up.

Restless and Live is a new release from the band comprised of two CDs, featuring the content of the band’s show at the 2015 Bang Your Head!!! Festival. There are a number of different releases of this material, including a CD/DVD combo pack, but this review will focus primarily on the audio content.

Anyone who had doubts about Accept enduring after the departure of Dirkschneider has since eaten those words; the three studio albums done with Tornillo, a New Jersey vocalist previously of TT Quick, are not just decent “comeback” records; they rank at a comfortable high place in the total Accept discography! These heavy metal anthems reign strong, much like the classics from the band’s 80s heyday.

So is this live album any good, and should you add it to your collection if you are a fan? As a fan of the group, particularly in the new Tornillo-fronted era, I can say with all sincerity that this is a kick-ass release that the fans are going to want to hear. It is fairly basic in terms of its execution; there are not a ton of surprises to be had here. But is that necessarily a bad thing when the musicianship is as strong as ever? 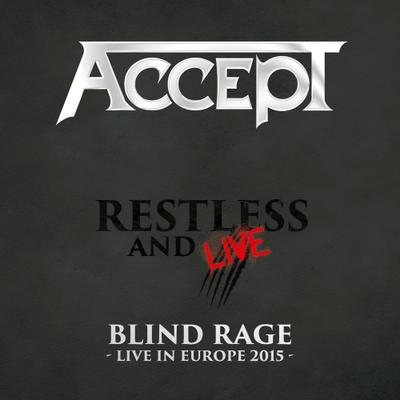 Accept: Restless and Live is a fantastic new release that fans will live.

The group has assembled an amazing setlist across the two discs; you get the best tracks from the classic Dirkschneider era performed well with the band’s new frontman, as well as newer cuts that rank amongst the finest the band has ever done. The classic cuts you love like “London Leatherboys,” “Losers and Winners,” “Fast as a Shark," and “Balls to the Wall” are all here, but I am proud to see the band did not skimp on the newer Tornillo-fronted recordings, including “Teutonic Terror,” “Stalingrad,” and “Dying Breed.” The one classic cut missing I would loved to have heard here is “Midnight Highway,” but that is a small omission.

The performance itself is what you would expect from these legendary German metalers. This lineup is one of the best in years, with key classic members and a great frontman that does justice to the material. One of the things I truly admire about Tornillo is that, while he has an Udo Dirkschneider-esque voice, he does not blatantly copy his work on the old material; these are powerful new renditions that the fans should love.

Accept fans are going to love what they here on Restless and Live, with the band’s current lineup rising for a live crowd and delivering a performance for the ages. Highly recommended.

Oasis: Supersonic Tells the Story of the ...