We weren’t able to get into the venue before the first band ended their set so there isn’t much to say about the NEW TRENDS since the Doppler effect wasn’t working in our favor. So before the next band goes on I take a quick look around and this festival is already damn near close to what I wanted from Las Rageous. There are plenty of booths set up selling everything from patches, t-shirts, CDs, and vinyl. The food vendors may have been more varied here and while it’s the same venue there are plenty more places to park your rear. Thank fuck.

The first band we actually saw was a two piece from Winnipeg, MB, Canada and featuring drummer Marcia and Jenna on guitars and vocals. MOBINA GALORE has an aggressive tone of their music really fills out their sound so if you’re having any thoughts of them not sounding full enough by not having a bass player. There’s no worries here. Such a bitchin’ guitar tone I wonder what sort of magical effect pedals could be on Jenna’s Pedaltrain pedal board. 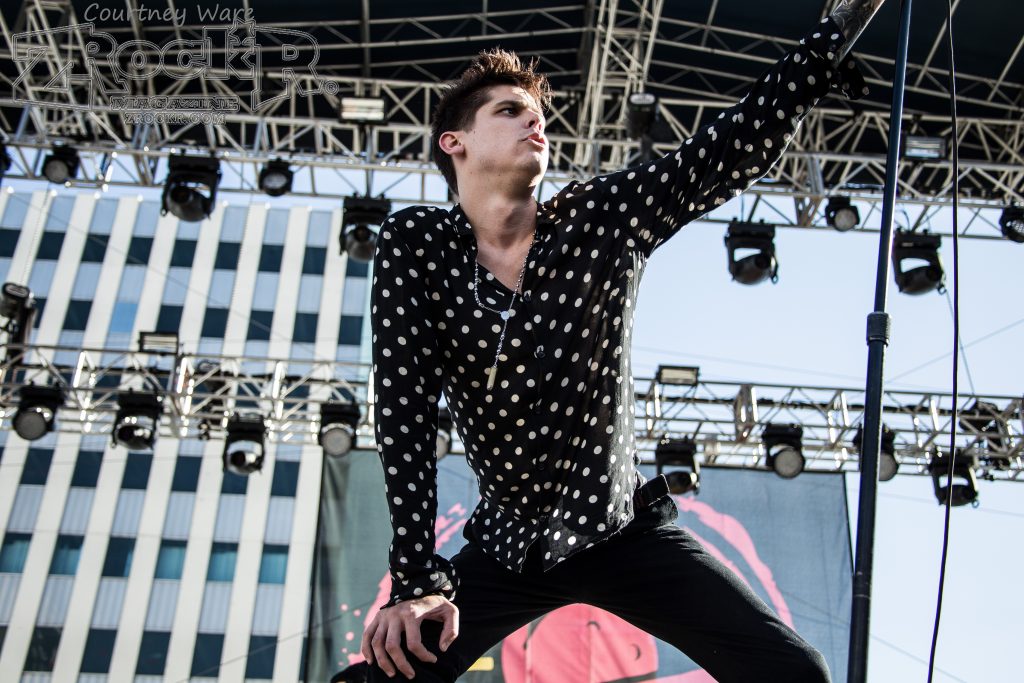 Another cool surprise on today’s line up were THE INTERRUPTERS, the four piece comprising  singer Aimee Interrupter in addition to three brothers Kevin, Justin, and Jesse Bivona. The Ska/Punk band has a full set worth of songs people should be happy singing along with. Granted if you know the lyrics that is. Oh well, maybe next time.

Hardcore Punk legend Keith Morris (BLACK FLAG, CIRCLE JERKS) could have been seen at the Dr. Martens booth doing a signing. However later in the night he took to the stage with the other members of OFF! Formed in 2009 and releasing First Four EPs in 2010 a self-titled full-length in 2012 and Wasted Years in 2014. In addition to Morris as vocalist OFF! also features Dimitri Coats (BURNING BRIDES) on guitar, Steven Shane McDonald (REDD KROSS) on bass, and drummer Mario Rubalcaba (ROCKET FROM THE CRYPT, HOT SNAKES). Morris had a bit to say about the political atmosphere though far, far less than I expected. What I was most expecting though was some no frills hardcore punk and we got that in spades. 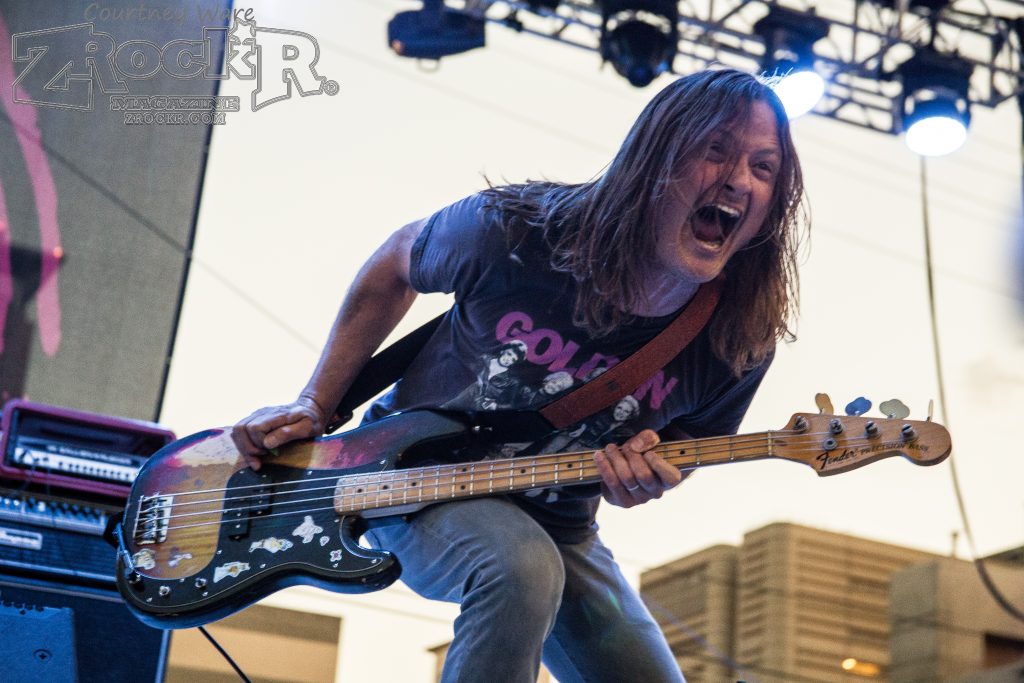 ME FIRST AND THE GIMMES GIMMES have to be my pick for one of if not the best cover band. That said every time their singer Spike Slawson (SWINGIN’ UTTERS, RE-VOLTS) said the next song was a cover I was tempted to scream “NO FUCKING SHIT!” in the direction of the stage.

IGGY POP is a fucking legend and those who disagree probably never so much as looked him up on YouTube. Seeing Iggy live has been on my bucket list of artists that I wanted to see before they retired or kicked the bucket. Most of the people I’ve had on that list have sadly passed away such as Lemmy, or have called it quits like BLACK SABBATH. Iggy miraculously has been one of the few I’ve actually gotten to actually see live. Not that I was worried he’d be the next in a long line of rock star deaths but a man who puts on a show like his either has some sort of secret to eternal youth or calls it quits once he feels he’s not performing to his own set standards. Seriously check out on of Henry Rollins’ spoken word events where he talks about trying to upstage Iggy on several occasions over the years and the Master showing the Student his place. Seriously look it up. It will be worth your time. 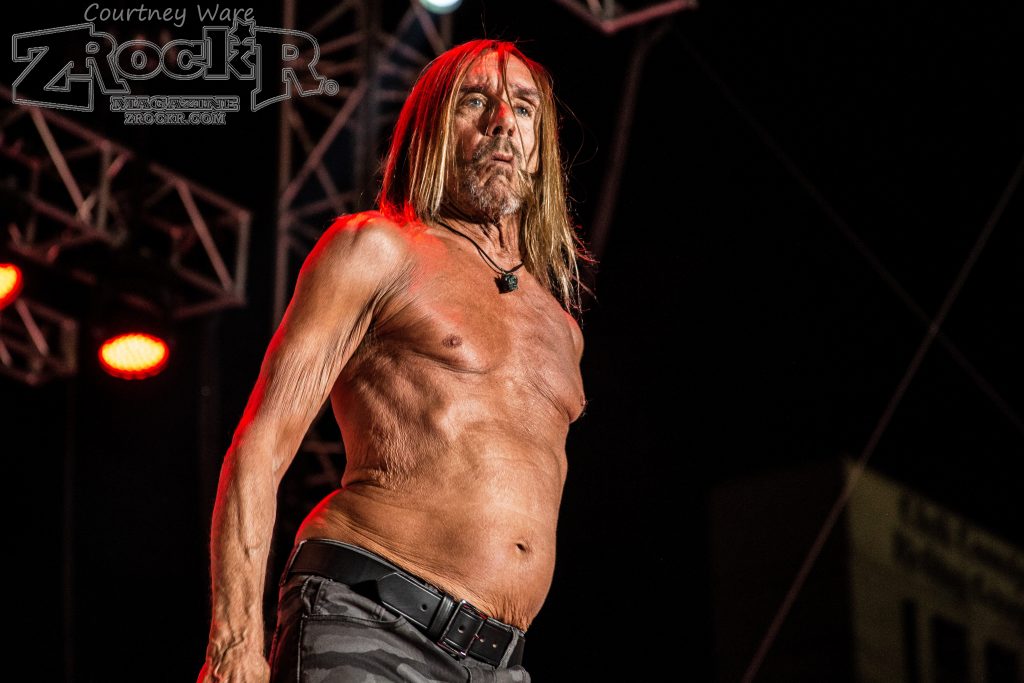 We made it in plenty of time to see today’s aggressive opener THE VENOMOUS PINKS. The all female Arizona based band was an excellent way to start the day. Between their own original tunes to the reworking of “Anything You Can Do” originally composed by Irving Berlin for the Broadway musical ‘Annie Get Your Gun’. They also did impromptu cover of the main riff from QUIET RIOT’s “Metal Health” and SLAYER’s “RAINING BLOOD” though the latter was rather strange with one of the guitarists using a clean tone. 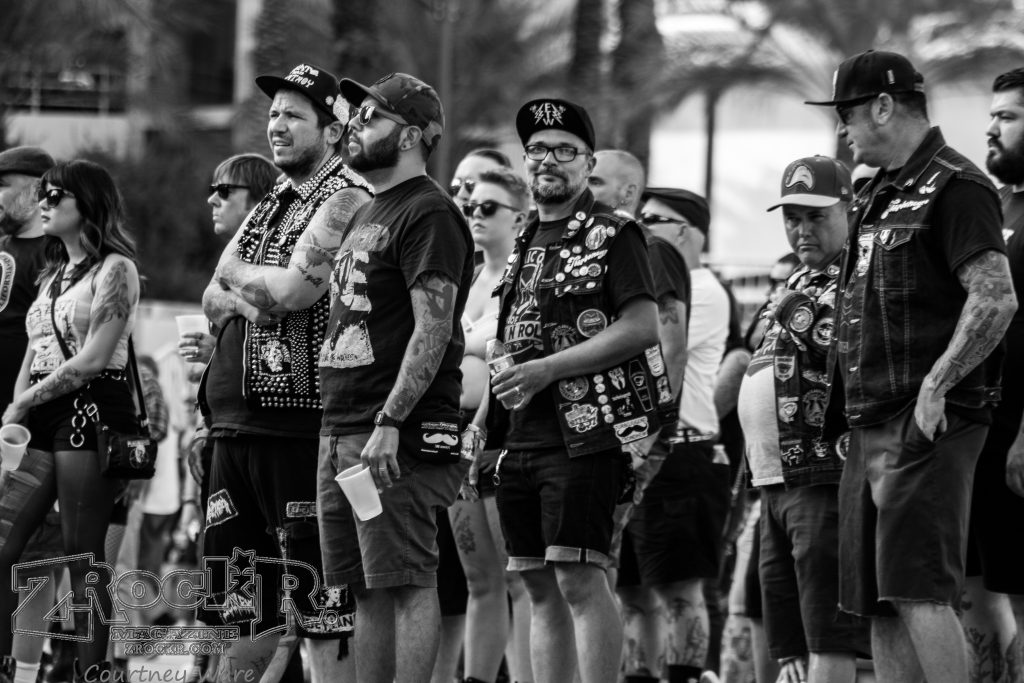 Before we we move onto the Day Two headliner I want to quickly go over a few more acts. THE REAL MCKENZIES aside from the authentic kilts as in sans underwear I have to commend not just that they incorporate bagpipes with it being just cheesy enough but that the band’s vocalist could be seen in the crowd shooting the shit with concert goers. I had to laugh seeing one of the Las Vegas Police officers photo bombing a fan’s picture with the vocalist.

THE DICKIES need to get a quick look in for the antics of their singer as well as some wonderfully strange happenings in the crowd. The snorkel and goggles were odd but a blow up sex doll made an appearance soon after. The vocalist refused to introduce the next song without getting a proper hug from the bass player. He’d also employed the use of different sock puppets including a dog and a cock and balls. The latter while singing the Barney theme song. They also did a pretty cool and fitting rendition of “Paranoid”. From the crowd someone in a T-Rex costume in the moshpit as well as a girl ten feet from us in a banana costume thrusting the bottom half like she was fucking an imaginary partner. 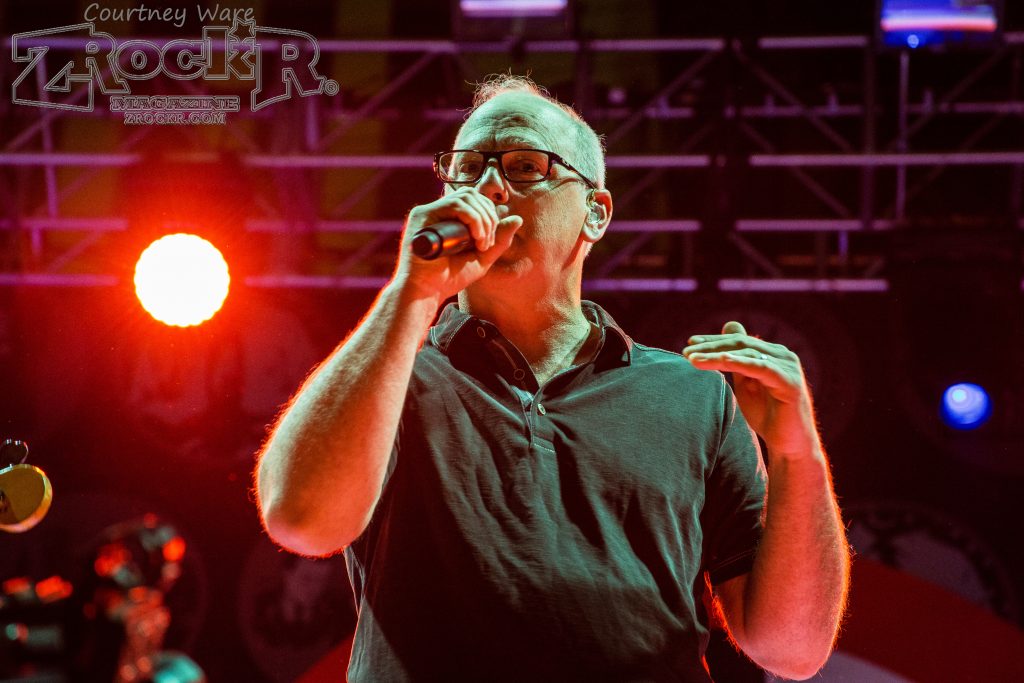 I need to talk about BOUNCING SOULS if no other reason than because their songs have such a great sing-along quality to them I’m honestly shocked I don’t hear about them much more often. FIDLAR has some interesting musical ideas to share but the lyrics tended to make me laugh after a while. We get it man booze and drugs are good, rehab and sobriety are bad.

BAD RELIGION is perhaps the band I’ve been most familiar with on this entire bill. Most recently because Courtney Ware, the photographer whose photos you are looking at regularly has there music playing in her car. Even growing up long after they had established themselves and a dedicated fanbase the band’s iconic logo was a regular sight everywhere from music stores, merch shops, concerts, and even my high school. They’ve been doing this for such a long time and it shows in how well they played and how great their set sounded. 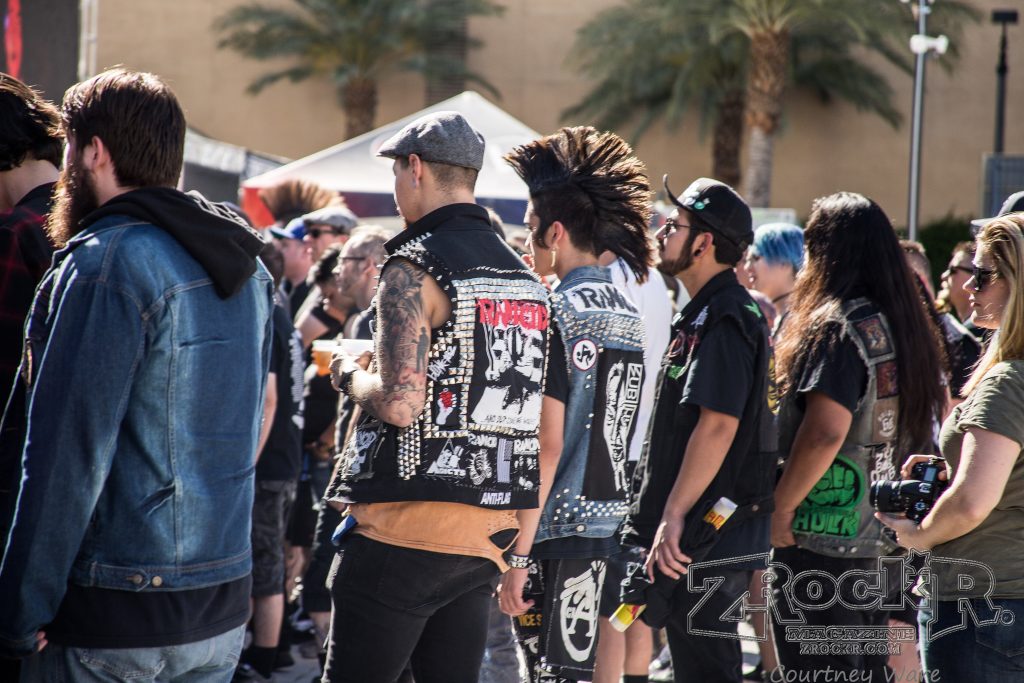 THE QUITTERS were able to surprise us with an interesting cover of THE PRODIGY’s “Breathe”. It’s worth checking out for yourself. The three piece WOLFPACK from Australia made their metal influences known in the way they compose their songs and made even more obvious by their guitarist wearing a LAMB OF GOD t-shirt, as well as his ESP/ltd James Hetfield signature Eclipse model guitar.

The band I was most looking to at Punk Rock Bowling is DISCHARGE. I first heard of them as one of the hardcore punk bands that Cliff Burton of METALLICA fame introduced to his bandmates. Their set was preluded by a intro tape including Bill Hicks’ famous “It’s Just A Ride” monologue as well as one of George Carlin’s bits from late in his career on religion. DISCHARGE hasn’t been the band that METALLICA knew back in the early 80’s in many years but in following decades the band capitalized on their metal head fan base by successfully crossing over. 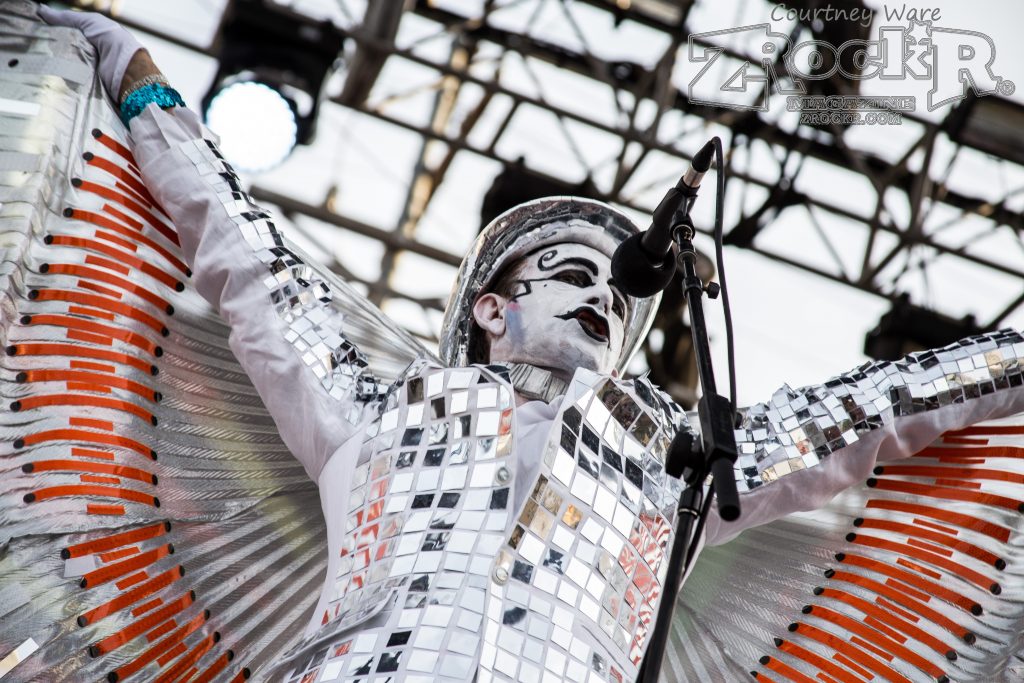 I wasn’t very interested in listening to punk music in middle school and into my early days in high school, mostly due to the fact I sat next to a punk named Jose who was fucking dick. One of the band’s who logo covered his jacket, backpack, binder etc. was that of THE ADICTS. I’d seen Clockwork Orange by then so their image wasn’t lost on me. Their live show was part cosplay, and part magic show. Confetti, ribbons, and fifty-two card pickup.

I wouldn’t have heard of PENNYWISE before if it weren’t for YouTuber Ryan “Fluff” Bruce (REST, REPOSE) and his FAQ Monday videos where he’d occasionally talk about his punk band days as well as his PENNYWISE fandom. What an incredible live show! Jim Lindberg at one point borrowed a camera from the photo pit to take pictures of the crowd. Near the end of the set the stage is full of people giving the show a party feel.

Over the course of PRB one of the videos they would play several times over during the event was a compilation of the work of Indecline. This is one of the criticisms of the event I had. They would switch the big screens from showing the band performing to these videos after the first three songs and it would be the same selection over and over. They were interesting and enjoyable to watch but they could have been a distraction for some people. One of the videos were about the naked Trump statues that had popped up all around the country. One was taken up on stage and a baseball bat was taken to it. First by a seventeen year old girl followed by a number of musicians until the head was taken off. 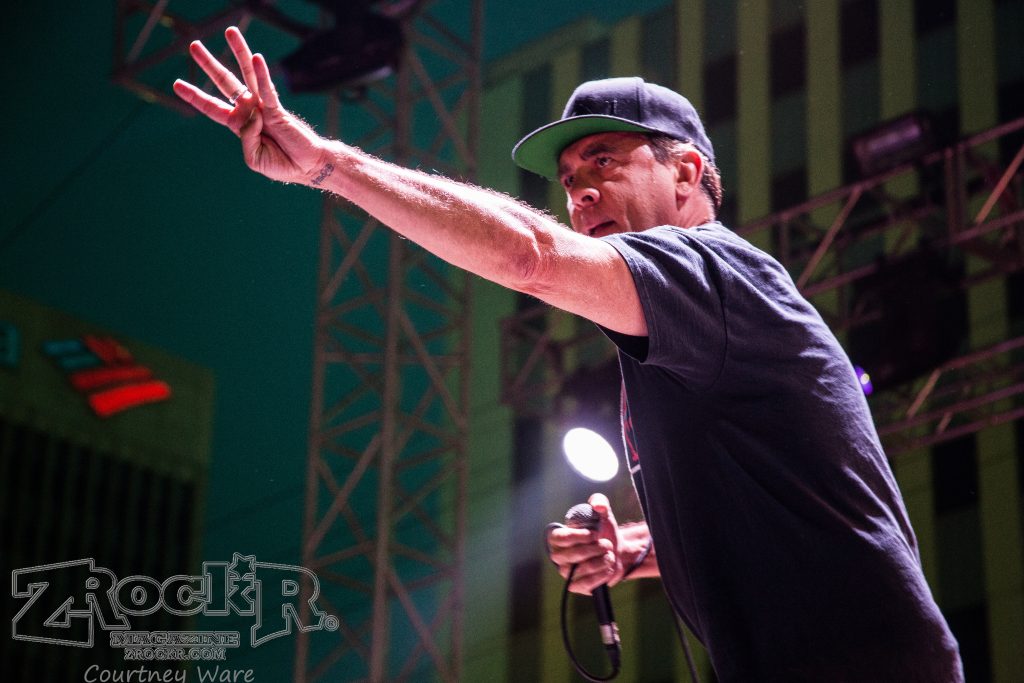 Photographer (also my girlfriend) Courtney Ware and I got into a short argument over the pronunciation of COCK SPARRER in front of Stephy and Sylvia (also of ZRockR) before we made our way to Day Three of PRB. She would pronounce it as Cock Spare-er,  and I said Cock Spar-er what the fuck ever… still think I’m right though. All that really needs to be said was that the London punk rock legends who are celebrating their 45th anniversary this year managed to prove why they were top billing for Day Three. 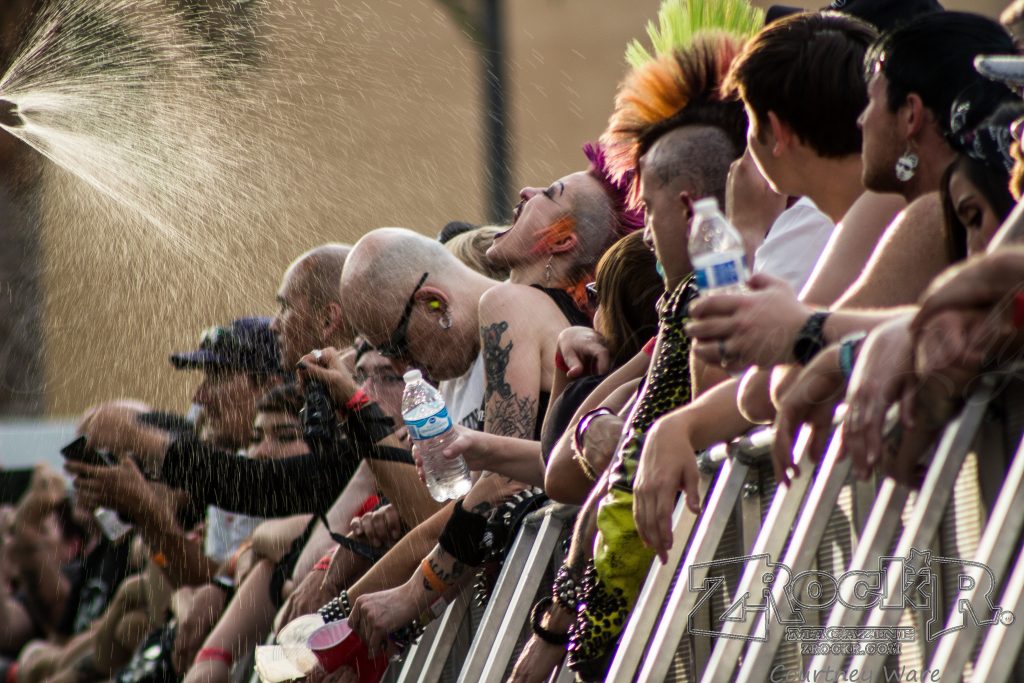 As I wrote in my review of the inaugural Las Vegas. I’m not so much of a fan of this venue for festivals. However Punk Rock Bowling made use of every bit of space provided to them. It’s my hope that other events such as that take a look at PRB at how the DTLV Events Center can be used. Provided that the lineup is as stacked as it was this year I might want to attend next year’s event with a bit more cash in my pocket and shop around at the booths that I only really had time to take a few moments to look in between bands. Good on you Punk Rock Bowling! Hope to see you again when you turn twenty!