Home›Movie Reviews›Suburbicon - 1950s Nostalgia Murder Mystery Features Brilliant Casting and Atmosphere.... But Not Much Else

Suburbicon - 1950s Nostalgia Murder Mystery Features Brilliant Casting and Atmosphere.... But Not Much Else

Suburbicon is directed by George Clooney, and stars Matt Damon, Julianne Moore, and Oscar Isaac. Joel and Ethan Coen co-wrote the screenplay, and the musical score is composed by Alexandre Desplat.

Suburbicon is set in the eponymous town in the late 1950s It is the ideal 50s sitcom-style town, where people have been relocating, settling down, and living peaceful lives. But the peace is shattered when Gardner Lodge’s home is invaded, and the actions of the robbers results in the death of his wife, leaving him, his son, and his wife’s sister (who has been staying with the family) in an awkward spot. Lodge tries to get on with his life and start over, but it is not long before things begin spiraling out of control, and it is revealed that there may be more to the events in question than meets the eye. 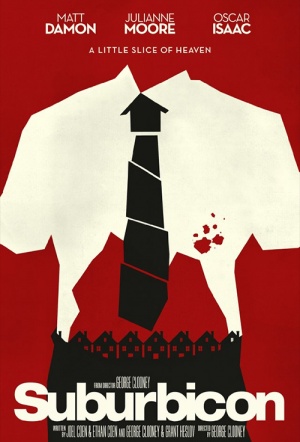 Suburbicon was a film with infinite potential, but the end result is a scattershot mess that does not know what to do with itself. Directed by George Clooney, a man who is talented on both sides of the camera (though he does not act in this film) and co-written by the Coen Brothers, this was a film that should have been a minor masterpiece. Instead, we are left with a great looking and well-cast film that unfortunately, isn’t much else. That said, the cast members certainly do the best they can with the material that they are given.

As for the positive qualities of this film, it is honestly one of the best looking films of the year. The crew has given us a town that looks like it would not have been out of place as the setting of a sitcom of the 50s era. The cars, the houses, the neighborhood, the technology; this film deserves Academy Awards for its look and atmosphere alone. The casting is brilliant, including a virtually unrecognizable Matt Damon as Gardner Lodge, and Julianne Moore as the sister of his wife, who ends up becoming a central figure in his life. Oscar Isaac (Star Wars: The Force Awakens, X-Men Apocalypse) gets in a few solid moments as a mysterious insurance man as well. 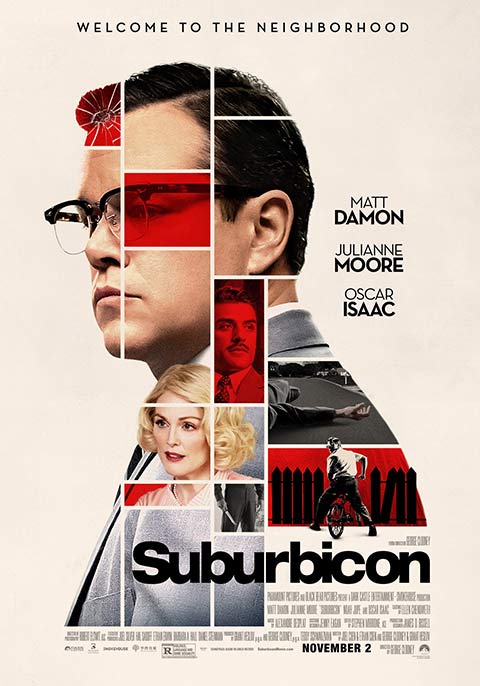 Unfortunately, none of it really holds together. Transitions between scenes and events are far too jarring; we go from the Lodges getting African-American neighbors, and their son forging a potential friendship with the new family’s son (a subplot quickly abandoned for the most part) to a scene of the Lodges being robbed later that night. Suburbicon jumps around haphazardly, trying to juggle genres and themes, and dropping the ball nearly every step of the way. It does not help that many elements of the plot feel plagiarized from the Coen Brothers earlier masterwork, Fargo (though I will not go into details here, so as to avoid spoilers). Not to mention that in the latter parts of the film, one of the villains is written off in a rather rushed and lazy way, which makes the resolution feel less than stellar.

The biggest problem with Suburbicon is that the movie tries too hard to shoe horn in unnecessary characters and subplots. Throughout the movie, we see the Lodge Family’s African-American neighbors being the victims of riots and protests just outside their home. The attitudes of the characters are certainly appropriate for the period, but there is one small problem... This has ABSOLUTELY NOTHING TO DO WITH THE REST OF THE MOVIE OR PLOT! Our main characters almost never interact with them, and certainly don’t speak up on their behalf, or try to help them in their time of need (hell, I don’t even think the African-American father has any dialogue). If discrimination is alive and well in the town of Suburbicon, a few lines of dialogue would have been sufficient to illustrate this point. This had the potential to be an interesting subplot, but it’s just kind of there, “on the side.” The final scene of the movie should have been one that tugged at viewers’ heartstrings, but just feels devoid of any meaning or substance since these elements were never developed.

Oscar Isaac fares similarly as an insurance man who comes to the Lodge house to investigate certain events; while his performance definitely leaves an impact, he is tertiary and in no way essential to the movie’s plot, feeling like padding on top of everything else. Plus, despite being billed as the co-star, he gets a mere two scenes. While he makes an impression on the viewer, again, his scenes could have been cut with no real loss of plot or storyline.

Suburbicon is a beautiful mess, but a mess nonetheless. We have brilliant casting and atmosphere bogged down by unnecessary subplots and characters that only drag the film on, and add absolutely nothing to the finished product. This fan expected more from the Coen Brothers and George Clooney. It will make for a decent rental for the curious when it hits home formats, but do not rush to the theaters to see this one.

Rating: Two stars out of four (my actual rating for the quality of the film is closer to one-and-a-half stars out of four, but I bumped it up a notch due to the atmosphere and casting, which deserve credit).

DISCLAIMER: All images in this review are the property of the respective copyright holders, including (but not limited to) Paramount Pictures. For promotional use only. All rights reserved.

The Foreigner - Action Thriller Brings Together ...