Best friends Amy, Kiki, and Carla are struggling to get ready and have the perfect Christmas celebrations with their respective families, but a wrench is thrown into the works when they learn that their OWN mothers are coming to town, complicating things further. Amy must deal with a perfectionist mother who wants to give her grandchildren what she believes to be the perfect Christmas, Kiki has to put up with a ridiculously clingy and obsessive mother, and Carla’s mother is a deadbeat who only shows up every few years, when she’s in trouble with the law or needs money. The trio of friends resolves to “take back Christmas” by any means necessary, and get through the holidays. 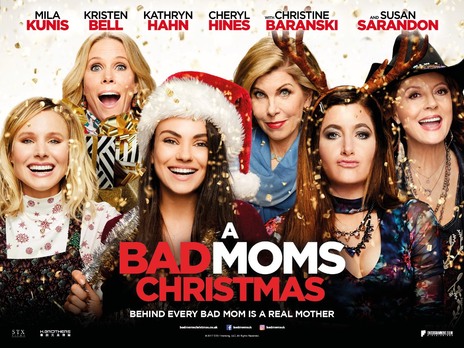 It is also worth mentioning that this movie, although a sequel, can be followed easily, even if you have not seen the first one.

A Bad Moms Christmas is a film had potential with a surprisingly strong cast and the ever-popular Christmas movie premise, but the film falls flat because it simply cannot decide what kind of a movie it wants to be. We fluctuate between R-rated comedy and genuinely tear-jerking monuments, and characters who do not even behave consistently. It is clear the film was rushed out due to the surprising box office intake of the original film last year, and this rush to get the movie out in time for Christmas 2017 may be a major part of the reason the end results are so inconsistent. That said, I will not deny that I did laugh a few times.

As far as the positive aspects of the film, credit needs to go to the cast, who does the best that they can with the material that they are given. Mila Kunis shows surprising range throughout the film as Amy, in both its most comedic and most dramatic moments, for instance. But the real stand-out in the film is Christine Baranski, who plays Amy’s mother, whose role entails giving the kids the most expensive of Christmas gifts on a regular basis, and believing that the best ways to get into the Christmas spirit entail seeing The Nutcracker in a five-hour Russian version, and throwing a ridiculously extravagant party with a sushi chef and a musical performance from Kenny G. In many ways, she feels like a more over-the-top version of Holland Taylor’s character from Two and a Half Men. There are some stand-out moments for most of the cast, but this was the performance that stood out the most for this viewer. 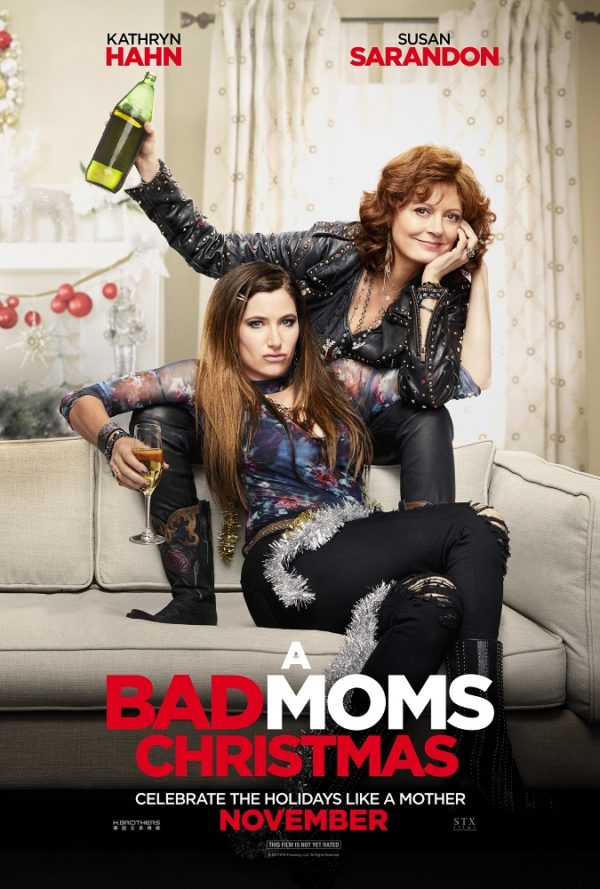 Unfortunately, the rest of the movie is a mess. Sloppy, inconsistent writing and an overreliance on “shock value” gags do not help here. Amy’s kids want to celebrate a low-key, relaxing Christmas, yet have no problem accepting ridiculously expensive gifts from their grandmother, which undermines this very premise. An ongoing joke involves one of the youngest characters in the film regularly dropping the F-bomb, but this very gag has been overused in R-rated comedies in recent years. No matter how good the ensemble of actors may be, they cannot rise above weak writing and predictable gags.

The tone of the film is equally spotty. One of the most memorable scenes of the film is a montage of the trio of mothers getting drunk at the mall and engaging in ridiculous shenanigans, including stealing a Christmas tree from one of the stores. Unfortunately, this only hints at what could have been a better movie, since they tend to act far more conservative and reserved for the rest of the film. At times, particularly near the end of the movie, things get far too dramatic, and the movie stops feeling like a comedy. Give me a relentless R-rated comedy, or give me a touching Holiday Season drama. Don’t try to slap it all into one movie, and have it feel like a compromise on both ends.

A Bad Moms Christmas is a comedy that had potential, but the end result is inconsistent and rushed, and feels like a retread of other, better comedies of recent years. I don’t think anyone will get through this film without laughing a few times, but there just is not enough to engage viewers throughout the run time of just over 100 minutes. There are better R-rated comedies, Christmas movies, and Holiday dramas out there.

DISCLAIMER: All images in this review are the property of the respective copyright holders, including (but not limited to) H. Brothers and STX Films. For promotional use only. All rights reserved.