The Breadwinner - A Powerful Animated Tale of Harsh Living in the Middle East!

The Breadwinner is directed by Nora Twomey, and is based on the book of the same name by Deborah Ellis. The film features the voice talents of Saara Chaudry, Soma Bhatia, Noorin Gulamgaus, Kane Mahon, Laara Sadiq , Ali Badshah, Shaista Latif, Kanza Feris, Kawa Ada, Ali Kazmi, and Mran Volkhard. Angelina Jolie is one of the executive producers.

The Breadwinner is set in Kabul, Afghanistan, where people live under the harsh rule of the Taliban. Amidst poor economic conditions and draconian, archaic customs and abuse, a young girl named Parvana must incur daily hardships, accompanying her father to the local marketplace where they must sell their possessions just to make enough money to survive. When her father is arrested and imprisoned by the Taliban, Parvana must cut her hair and disguise herself as a male so that she may walk the streets freely, finding ways to work to support and her destitute family, with her family trying to plot a getaway to a more peaceful place, away from these hardships.

Films about the Middle East are nothing new; it is a region of the world that has seen conquerors and brutal, relentless regimes over the centuries. The hardships the people face are perhaps more brutal than they have ever been, under the Taliban and their harsh, fundamentalist implementation of Sharia law. Do not let the fact that The Breadwinner is animated deter you from watching the film; this is a powerful story that beautifully demonstrates the day-to-day life and struggles of an oppressed people. In fact, it may just have this moviegoer’s vote for “Best Animated Film of the Year.” 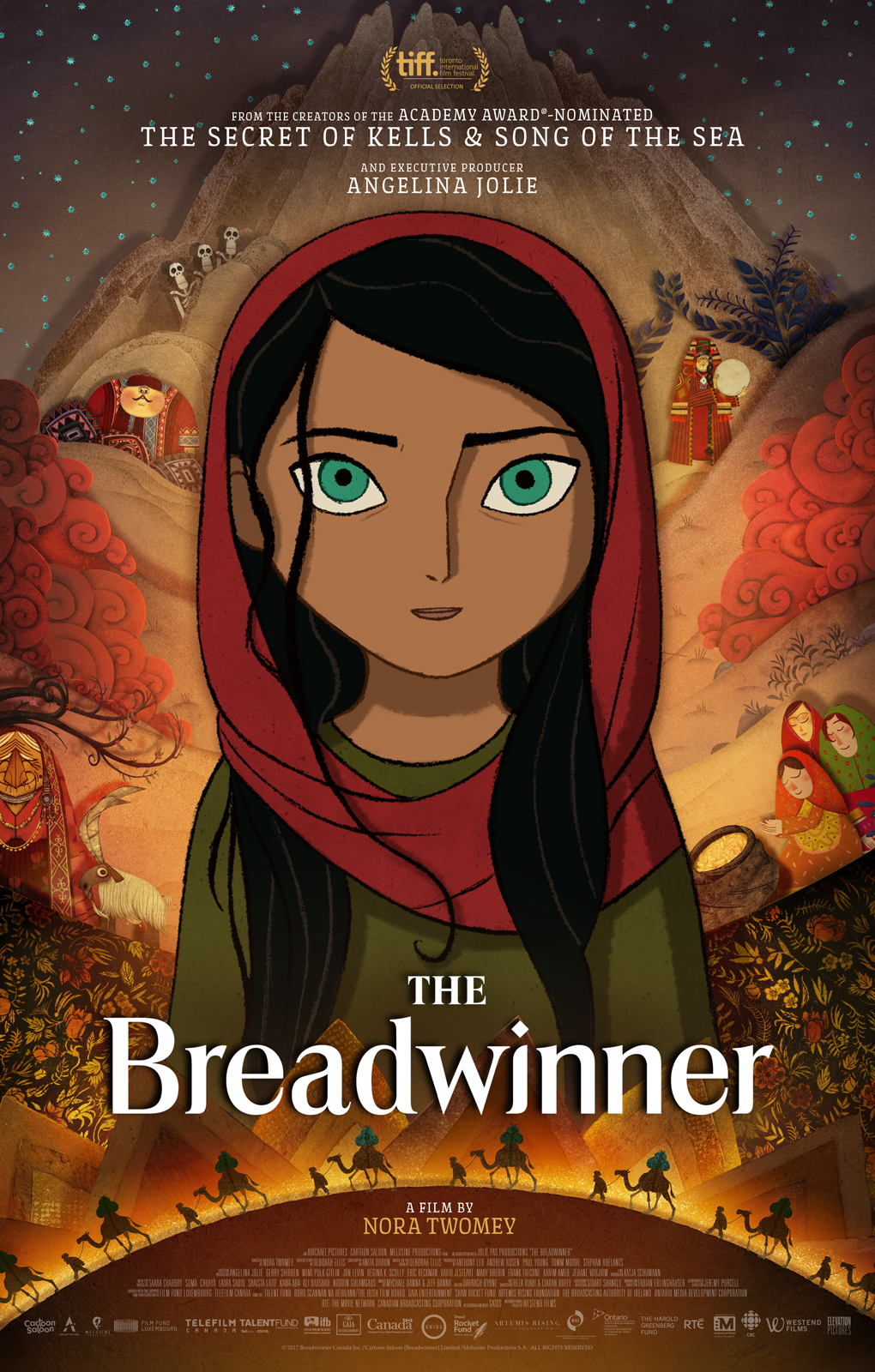 Odds are that you probably already know of the struggles that people in Middle Eastern countries face under the hardships of an oppressive, fundamentalist regime. People are regularly beaten and thrown in prison without a trial. Women are lower than second-class citizens, required to keep their faces covered at all times, and not even allowed to go outdoors unless in the company of a man. Many people do not know how to read and write, with education being a rare luxury. Food shortages and a lack of running water are all too harsh of realities, yet for many in these war-torn nations, this is everyday life. Though it is not exactly the central story/theme of the film, The Breadwinner stands out in its harsh, unflinching, and painfully accurate depiction of Middle Eastern life; this is not toned down despite the animated nature of the movie. That a place like this can still exist in the modern world, with abuse and discrimination against people running rampant, is insane.

The animation and look of the film are definite highlights; in a day and age in which every studio seems to be cranking out 3D movies on a regular basis, this return to traditional, hand-drawn 2D animation is a welcomed change. There are a few scenes with CGI assistance that stick out like a sore thumb (why do the studios insist on doing this?), but overall it is a fantastic looking movie, from start to finish.

One of the best elements of the film is that, while set in recent times, it does not shy away from the mythology and the history of the region. Many of the scenes feature characters telling and recounting stories of the region’s history and mythical stories, which make for an interesting contrast with the struggles our heroes in the present face. The film also makes a simple but effective stylistic decision to use a different animation style for the “story” sequences, differentiating from the “main” story.

The characterizations and the way that the plot play out feel authentic and true to life. Parvana is a likable and sympathetic protagonist, who is willing to do what it takes to support and help her family, literally putting her life on the line to do the right thing on many occasions. Things that we take for granted in Western culture are luxuries to the Afghans that the film follows. And while the narrative does get a little bogged down and difficult to follow in places, and there are a few simple things that go unexplained that could have been remedied with a few lines of dialogue, the film accomplishes what it sets out to. Even the film’s ending, while optimistic, is anything but a “happily ever after” one. You will definitely find yourself wondering what happens to these characters in the future to come.

The Breadwinner is a powerful film dealing with the harshness of life in the Middle East, and tells this tale just as well, if not better, than many live action films that cover the same subject. Do not be deterred that this is an animated film; it does not shy away from the horrors and hardships that people face in this part of the world daily. At 90 minutes, it does not wear out its welcome, nor does it feel rushed. A very highly recommended film, and easily the best animated film I have seen in 2017.

DISCLAIMER: All image in this review are the property of their respective copyright holders, including (but not limited to) West End Films and GKIDS. For promotional use only. All rights reserved.

Novitiate - A Polarizing, Powerful Tale From ...

The Man Who Invented Christmas - The ...