Molly’s Game is based on the book of the same name by Molly Bloom. The film is written and directed by Aaron Sorkin; it is Sorkin’s directorial debut. The movie stars Jessica Chastain, Idris Elba, Kevin Costner, Graham Greene, and Michael Cera.

Molly Bloom was a promising skier with what looked to be a certain future, but an injury derailed that dream. Years later, Bloom finds herself in Los Angeles working multiple jobs, including working as an assistant for a man that runs high stakes poker games. When she is unceremoniously let go from his services, she begins running games herself, eventually moving her enterprises to New York, but it is not long before she is in over her head with the wrong people, and is eventually arrested by the FBI and sent to trial. With a reluctant lawyer in her corner, she must prove her innocence and clear her name, not wanting to disclose confidential information that could destroy the lives of others.

This is Aaron Sorkin’s directorial debut, but his name has been an important one in the entertainment industry for decades, having written A Few Good Men, and created the television series Sports Night and The West Wing. With his knack for well-written, rapid-fire dialogue, the story of Molly Bloom seemed like a sure-fire hit for Sorkin’s first trip to the director’s chair. The film gives us an excellent leading lady in the form of Jessica Chastain as Bloom, and Idris Elba as her attorney, and many memorable moments largely courtesy of Sorkin’s superb writing. Unfortunately, poor pacing, a frustrating non-chronological narrative, repetitive scenes, scenes that feel like they belong in other movies, an overlong run time, and the fact that Sorkin seemed to be making the movie for poker players rather than more conventional audiences, all work against what could have done Molly Bloom’s story justice. 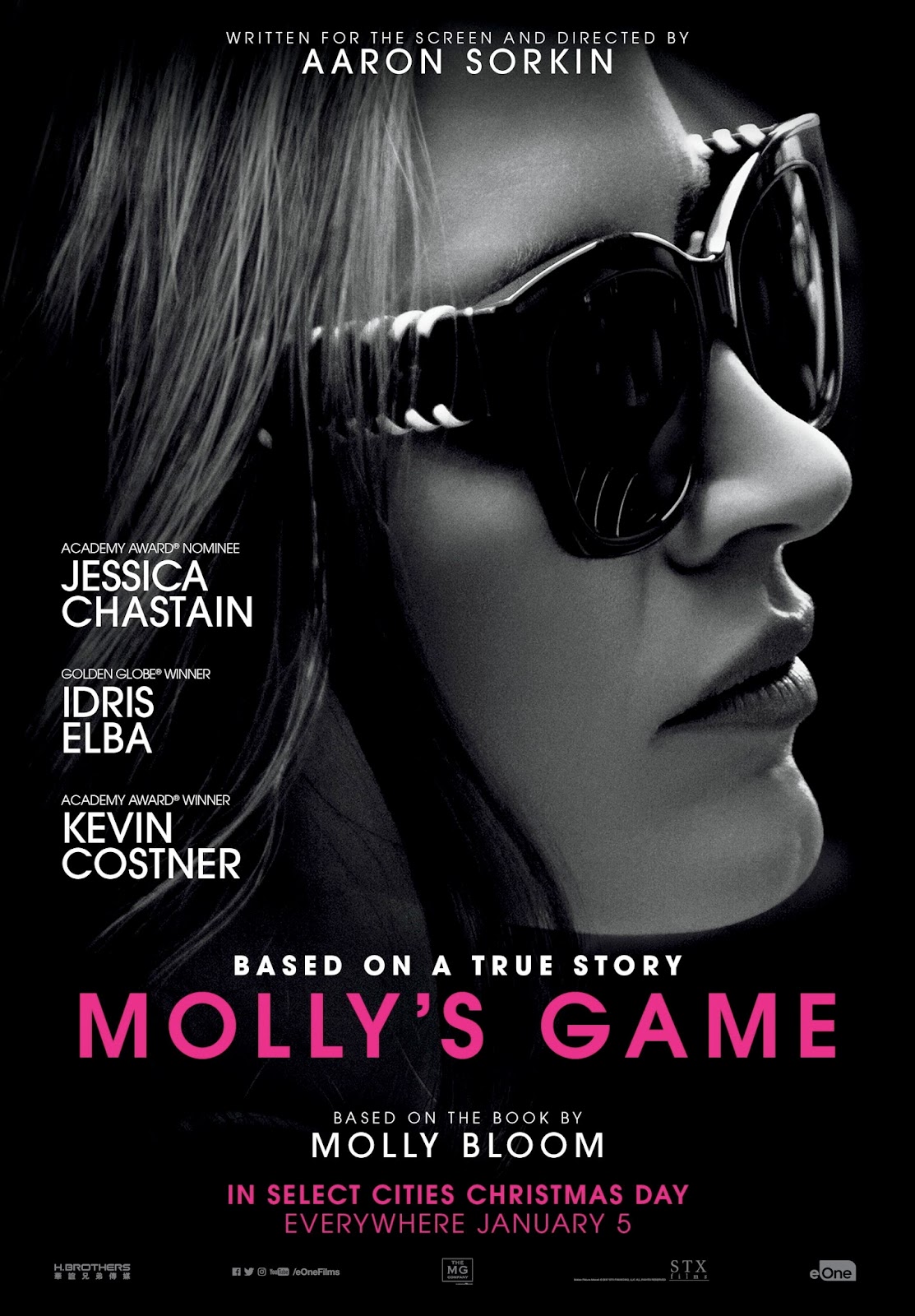 While there will certainly be issues taken with other aspects of the film, the one thing no one can argue with is the superb casting, namely Jessica Chastain as Molly Bloom. Chastain owns this film, and every scene she is in feels authentic, whether she plays Bloom at her most confident and calculating, or her most vulnerable. The supporting cast fares just as well, including Idris Elba in the role of Bloom’s attorney, a man who at first wants nothing to do with the case, but reluctantly steps up to do his part, becoming all the more enamored with Bloom’s story. The film is sure to have its detractors, but I doubt any of them will argue with the casting choices.

Unfortunately, Molly’s Game is no masterpiece, despite having all the pieces in place to make one. Pacing and redundant scenes drag the film down throughout its 140-minute long time, which unto itself is about half an hour too long for a film such as this. How many scenes do we need to have of a poker player wanting to run off with Bloom? How many random controversies do we need to see with the individual poker players? I understand a movie needing to, at times, be somewhat repetitive a few times to drive a point home. But Molly’s Game does this to death. The individual players’ stories grow tiresome; the film needed to focus more on the big picture rather than the sob story of each and every player that comes to the table. The non-chronological narrative that jumps back forth between the “present” and the events leading up to Bloom’s trial does not do the film any favors, though arranging everything chronologically likely would not have improve things much.

Many scenes in the film feel like key belong in different films altogether, and this makes the end product even more confusing and something of a head scratcher. A scene with a young Molly Bloom arguing with her professor father at the dinner table would have been more at home in Lady Bird. I like that the film somewhat covered Bloom’s early life as a skier and did not leave this out of the movie, but the scenes that focus on this, again, tend to detract from and slow down the narrative; these are things that could have been handled with a few lines of dialogue rather than what feel like Eddie the Eagle outtakes. It seems like Aaron Sorkin always has to make sports a component of his productions, but this aspect would have benefited from a “less is more” approach.

Kevin Costner is being billed as one of the co-stars of the film on all posters and promotional materials, but he is barely in the film at all. He does get one fantastic scene near the end of the movie, but his name should not be on the posters next to Chastain and Elba, in the same large print, given that he barely does anything. His character, despite being Bloom’s father, is tertiary at best in terms of the story.

But, the biggest problem the movie has, is that Sorkin seemed to be making the movie with poker players in mind, and not mainstream movie audiences. One elaborate scene in the middle of the film with some poker showdowns in one of Bloom’s games is cut in a television poker game style. In addition to the scene being too long and its overemphasis on the individual game which does not have a substantial bearing on the film’s plot, Sorkin seems to think everyone watching the film is a professional poker player. My head was spinning during these scenes, and I had no idea what anything meant. I do not know how the game of poker is played. I am sure that many people who go to see Sorkin’s film also do not know how it is played. When you are making a movie like this that will be seen by a mainstream audience, things like this cannot happen.

I have been harsh on several aspects of Molly’s Game, and I certainly stand by my criticisms. But there is still a lot of about the film to enjoy, namely the performances from Chastain and Elba. Don’t rush out to the theater to see the film, but when it hits home formats, it’s a worthy rental if nothing else.