Home›Movie Reviews›Along With the Gods: The Two Worlds is a Korean Cinematic Gem Not to Be Missed!

Along With the Gods: The Two Worlds is a Korean Cinematic Gem Not to Be Missed!

Along With the Gods: The Two Worlds is directed by Kim Yong-hwa, and stars Ha Jung-woo, Cha Tae-hyun, Ju Ji-hoon, and Kim Hyang-gi. The film, which is based on Joo Ho-Min’s web comic, is part one of two, with the second installment scheduled for release in summer 2018. The film is in the Korean language, and is shown with English subtitles for its American exhibitions.

Kim Ja-hong, a firefighter, dies in the line of duty when rescuing a child from a burning building. Upon his death, he arrives in the afterlife, in the company of a trio of defenders, and is told that if he is found innocent in his trials (as in courtroom-style trials) of the Seven Hells, he will be reincarnated. But no aspect if his life is off limits; the otherworldly prosecutors will stop at nothing to expose his past misdeeds to the gods and goddess presiding over the trials in the Hells. As more unexpected developments occur, one of the defenders heads to Earth to investigate the goings on, and many more unexpected twists and developments from Kim’s past come to light, many of which could prove to be obstacles on the journey to reincarnation.

Along With the Gods: The Two Worlds was an unexpected surprise for this cinephile. With a totally original premise, intriguing characters, surreal landscapes and settings, and a strong combination of fantasy and drama, this is a truly spectacular film that must be seen, even if it does suffer from an overlong run time and an overreaching narrative. 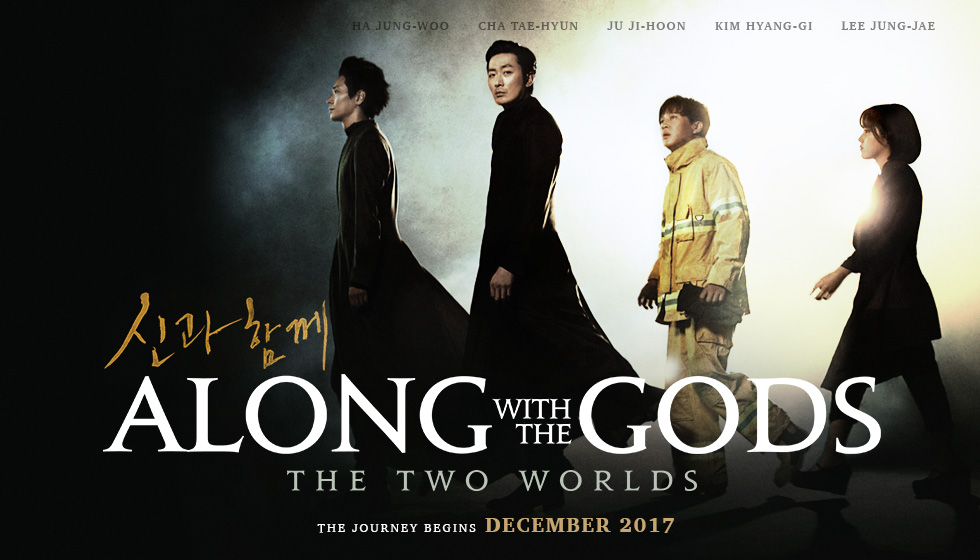 The casting in the film is top notch, with Cha Tae-hyun stealing the show as Kim Ja-hong, the deceased firefighter who finds himself in a literal series of trials for his life. Understandably confused, scared, and looking back on certain past actions with regret despite his selfless nature later in life, he is the three-dimensional, flawed but sympathetic protagonist a film like this needs. Head defender Gang-rim, played by Ha Jung-woo, steals the show in his scenes, whether he is acting in the role of the more traditional attorney, or heading outside of the afterlife on his personal investigations for the sake of the trial.

The settings and cinematography are equally impressive. While many sequences are a bit heavy on CGI, the surreal nature of the Hells that we see in the film draw the viewer in, and show them some of the most unique locales seen in a film in recent memory. Seeing Hell in a film is nothing new, but I assure you, you have never seen it like this. From a sea of human-faced fish that eat souls to a forest shrouded in piercing blades, to gods and goddesses in each Hell leaving an impact on any viewer of the film. The visuals in this movie will stay with you, long after you are done watching it.

Despite its surreal fantasy nature, the film does not shy away from authentic drama. We see our protagonist’s past, including the good and the bad. I want to avoid spoilers here so will not go into any specifics, though. The film can be a tear jerker at times, with the dramatic elements never feeling contrived or like they were wedged into the film as an afterthought. Everyone invokes a genuine emotional response from the audience.

Okay, as much as I loved this film, there are a few minor shortcomings that keep it from reaching a perfect rating. The basic premise of the film, with a man going on trial in the various Hells to determine if he is fit to reincarnate, is a brilliant idea for a film, and the movie did not need to reach much further than this. But the movie loses its touch with the scenes set on Earth, involving the presence of a vengeful spirit that may have ties to the protagonist. These scenes, while visually satisfying, overload the narrative, and push the run time too high. Many of the “action” sequences of the film feel unnecessary as well; there was one scene where the movie basically turned into the climax of Spider-Man 3, complete with giant Sandman. Hints of the past life of one of the defenders are scattered throughout the film, but this is never developed, and ultimately feels tertiary and unnecessary. As was previously stated, the second part of the film comes out in summer 2018, so the last few scenes of the movie feel like shameless plugs for the second installement, even though this film does have a fairly definite conclusion in some regards.

I love seeing a movie that brings a totally original and entertaining premise to the screen. Along With the Gods: The Two Worlds is not a perfect film, but makes up for it with memorable visuals, three-dimensional characters, and a combination of drama and fantasy action that will not be soon forgotten. A highly recommended cinematic experience that is not to be missed!

I, Tonya - Heartbreaking, Hilarious, and an ...