Home›Movie Reviews›Peter Rabbit - A New Take on a Classic Story!

Peter Rabbit - A New Take on a Classic Story!

Peter Rabbit is directed by John Gluck, and is based on the stories by Beatrix Potter. The film stars James Corden, Daisy Ridley, Margot Robbie, Domhnall Gleeson, Rose Byrne, and Sam Neill.

In Peter Rabbit, the eponymous hero lives with his sisters and cousin in a rural wooded area, where they regularly infiltrate and steal from the garden of Mr. McGregor, a mean old man that hates rabbits and wildlife, and was responsible for the death of Peter’s parents long ago. All seems well when Mr. McGregor has a heart attack and falls over dead, with the animals moving on in, but it is not long before a younger, more wily and devious Mr. McGregor, the old man’s great nephew, relocates to the home, with the intentions of selling said house for his own terms. Peter and company are equally frustrated with his taking attention away from a local young woman that has always treated the bunnies with respect, so it is up to them to show her his true nature, and strike back so they can have access to the garden that has the food they need to sustain themselves. 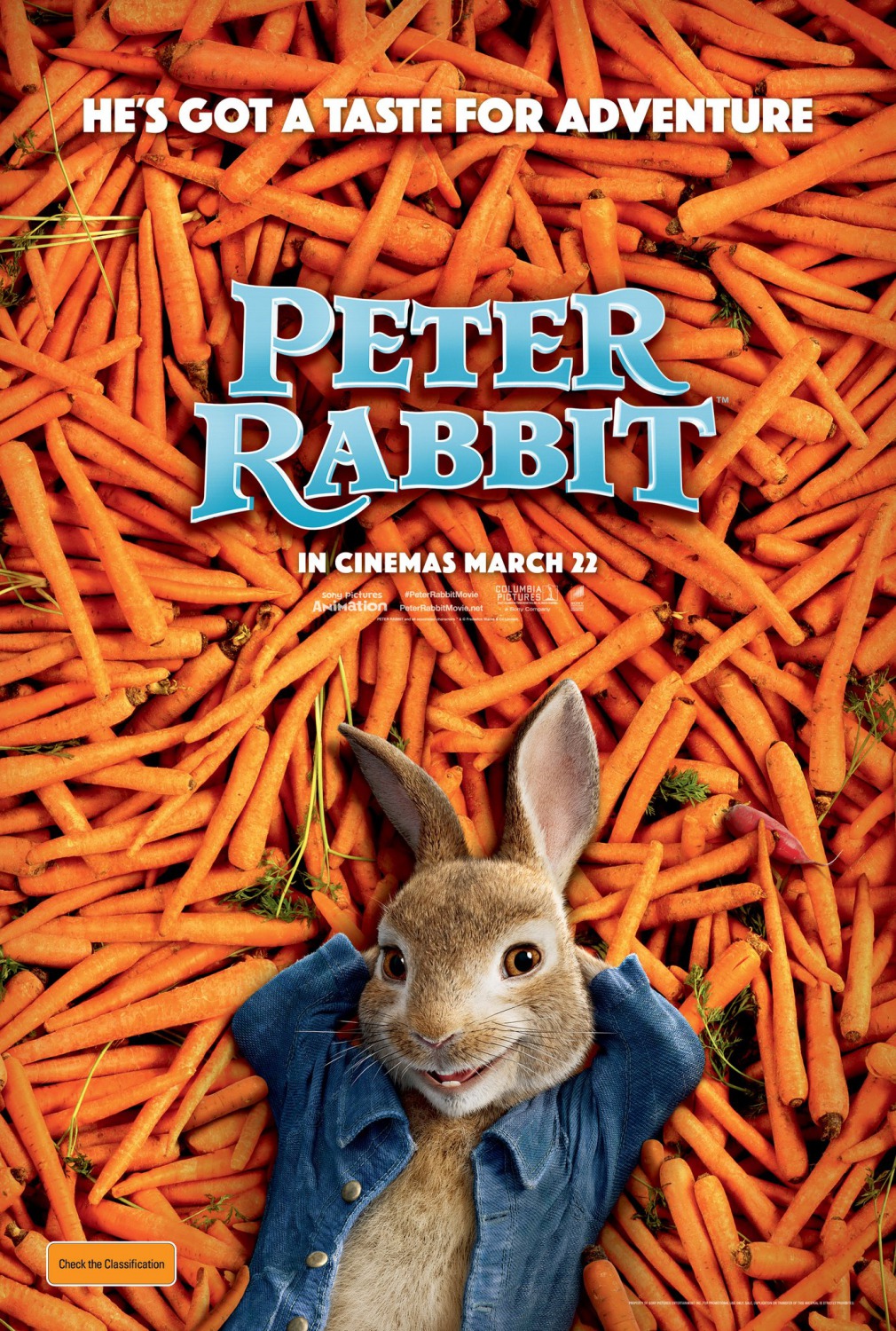 Right from the initial announcements, people were quick to bash Peter Rabbit, calling it a desecration of the original Beatrix Potter stories. While I will be the first to admit that the movie does have a few flaws, overall it is better than I was expecting, with lightning-fast humor and a witty script. The gorgeously-animated main characters add to the experience, and it is a film children and adults should enjoy, regardless of their tastes in movies.

The overall approach to this story works better than one would expect. While there are certainly some attempts to modernize the story that don’t work as well as others, the newer twists and means to achieve humor and entertainment are surprisingly solid. The witty script never lets up, nor do the gags, and since they are actually funny, the audience will likely be able to overlook the minute flaws. The biggest issues with the movie are the overuse of popular music, and a third act that feels a bit “tacked on” and rushed, but the often Shrek-esque approach taken here fares surprisingly well.

One major surprise here is how much how well the cast fares, including James Corden voicing the title character, fellow rabbits voiced by Daisy Ridley and Margot Robbie, and live action performances from the likes of Rose Byrne and Domhnall Gleeson (General Hux from the newer Star Wars films), who manages to serve as a slimy and devious yet still completely likable and funny villain. While the slapstick does go a bit overboard at times, I doubt there was any point here where I went more than five minutes without laughing. Yet, the film still has a heart despite its emphasis on humor. A tight, often hilarious script, and the performances, both voice and live-action, do the job exceptionally well.

However, for this cinephile, the biggest highlight of the film would have to be the animation of the rabbit characters. They look damn near realistic, yet have expressive faces and personalities conveyed through actions and mannerisms alone. You could mute the film's dialogue, and tell what these characters are feeling, just looking at them. And yet they tend to move around in a believable way true to the way real-life rabbits act in many scenes, which is a pleasant surprise.

Peter Rabbit is bound to have people continuing their insults for not adhering to the era and exact tone and feel of Beatrix Potter’s stories, but for what it is, it is a surprisingly good and entertaining family film. It’s nice to see a film this funny and entertaining that kids and adults alike can enjoy, and the lightning fast gags and quips do not let up; it is also a relief to see the film does not overemphasize gross-out humor or any “cheap” laughs that are not earned. Solidly recommended for anyone seeking family entertainment!

DISCLAIMER: All images in this review are the property of their respective copyright holders, including Columbia Pictures, Sony Pictures Animation, Olive Bridge Entertainment, Animal Logic, 2.0 Entertainment, Screen Australia, and Screen NSW. For promotional purposes only. All rights reserved.