The 15:17 to Paris: Clint Eastwood Directs the Real Heroes.... But the Film Falters

The 15:17 to Paris is directed by Clint Eastwood. The film stars Spencer Stone, Anthony Sadler, and Alek Skarlatos; the real-life heroes of the 2015 Thalys train attack.

In 2015, aboard a train, a gunman attacks, but his plot is foiled due to the fast thinking and selfless actions of three Americans vacationing in Europe. The film looks at their lives from childhood to adulthood, culminating in the moment where they became revered heroes, preventing the injury and death of others.

Clint Eastwood, pushing 90 years of age, is still a powerful presence in the entertainment industry, even if in more recent years he has taken a seat behind the camera, in the director’s chair, more than he has acted. Unfortunately, despite its best intentions, and being a true tale of heroism and valor, The 15:17 to Paris stands as one of Eastwood’s rare misfires, due to the majority of the movie feeling like filler that has little bearing on the plot.

Eastwood has received ire from many critics for his decision of going the Audie Murphy route and casting the real-life heroes of the incident rather than use traditional actors. While I will be the first to admit that actors probably going have given better performances; the acting from the heroic trio is not as bad as some say. Honestly, professional actors have given far worse performances in other films. This seems to be the major point of contention with other critics and moviegoers, though it is not this that derails the film. 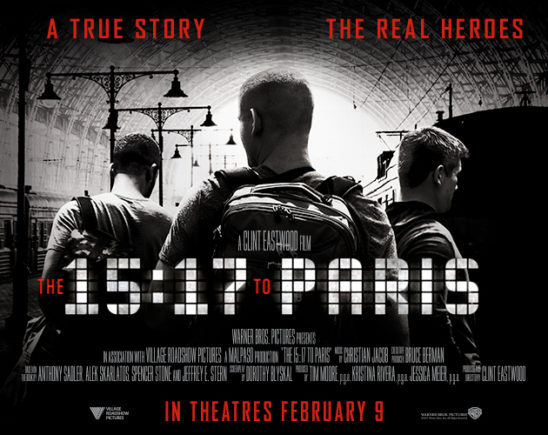 The biggest problem with the movie is its clumsy narrative, with the majority of the film focusing on information that is irrelevant and unnecessary. The scenes of young Sadler, Stone, and Skarlatos are well-acted enough (I honestly hope I see these young actors in more movies in the future), but said scenes feel like they belong in Wonder, and not this film. Likewise, as adults, the trio heads to Europe, for where they will commit the actions that forever cement their status as heroes. The problem is, we follow literally their ENTIRE BACKPACKING TRIP. So you’ve essentially got filler galore that, once again, does not feel relevant to the film or the heroic events at hand. The movie never quite finds its footing, and seems more content to show us scenes of the main characters sightseeing in Europe than it does dealing with their military service, which the film only briefly hints on and touches upon. The film feels like it is dragging far too often, and you will have an ominous feeling throughout of “when is the climax coming?” Many movies opt for a "split narrative" that combines "present" footage with flashback footage, and while often clumsy, going more for that kind of filmmaking could have worked wonders here.

Okay, the best thing I can say for this movie is, when the (very brief) climax comes, it is handled well, and does justice to the events at hand. The problem here, however, is that this is a 94-minute movie about an event that literally only lasted a handful of minutes. It would have been better off as a made-for-TV movie, or a documentary. There is a great story of true heroes to be found here, but it simply never comes together.

I have nothing but admiration for Clint Eastwood, whether he is acting or directing. And I have nothing but the utmost respect for the heroes that foiled this heinous crime. It is just a shame that what we get instead is a movie with undeveloped child melodrama, and a movie about guys sightseeing in Europe. These heroes deserve the proper tribute, and sadly, this film is not it.

DISCLAIMER: Images seen in this review are the property of their respective holders, including Warner Bros. Pictures, Malpaso, and Village Roadshow Pictures. For promotional purposes only. All rights reserved.

Theory Of A Dead Man Are Coming ...