Ocean's 8 - Female-Centric Heist Film Isn't Great, But Has Its Moments....

Debbie Ocean, the sister of Danny Ocean, has been released from prison following a sentence of nearly six years. During her incarceration she began planning her next big heist. She recruits the help of a number of other women, including an old friend, a street hustler/thief, a jewelry maker, and a disgraced fashion designer, to steal a necklace worth over a hundred million dollars from the neck of a noteworthy actress during the Met Gala. Not surprisingly, unexpected complications surface. Will the team succeed in their plan or will Debbie land herself back in prison?

Whenever a movie franchise has run its course, it’s typically rebooted/given a sequel with younger versions of characters or opposite-gender characters. Ocean’s 8 is the latter, which gives the“Ocean’s” franchise the female-centric treatment. The film’s editing and direction, along with its ensemble cast, are top notch, with plenty of memorable scenes and laughs along the way, but the movie struggles to juggle its numerous talents and expects the audience to swallow too many plot twists in its conclusion. It’s a classic example of the journey being better than the destination. 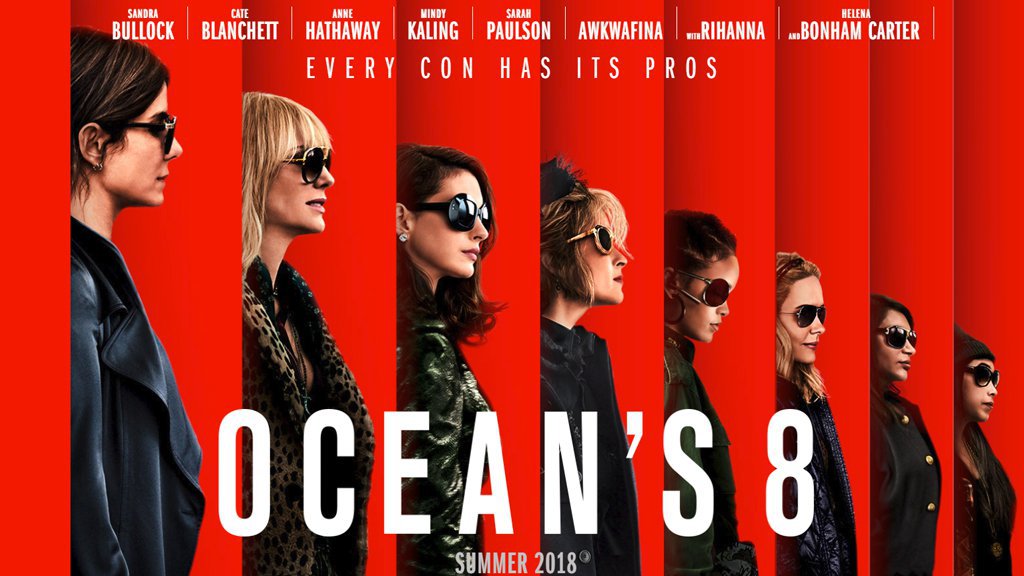 If there’s one thing no one can argue with in Ocean’s 8, it’s the female ensemble cast, featuring everyone from star Sandra Bullock to other faces who include the likes of Helena Bonham Carter as a washed-up fashion designer and Rihanna as a computer hacker. Every one of these women brings something unique to the film, and you’ll have at least one memorable moment from each of them, even if the movie struggles to balance its sizable cast and they end up lacking depth as a result. The supporting cast, including the likes of Richard Armitage and James Corden, holds up well too but suffers from the same problems including a lack of character development.

The structure of the film is surprisingly solid. Director Gary Ross (Seabiscuit, The Hunger Games) keeps things moving along with brisk and often abrupt scene transitions. Bullock's intro scenes into the movie are handled perfectly and definitely leave us rooting for her character. For the most part, too much time is never wasted in one place. The over stylized scene transitions and frame effects are a bit overdone but do manage to give the movie its own look and identity.

If there’s one major issue with the film it’s that its conclusion simply leaves something to be desired. A common flaw of heist movies is a lot of “after the fact” plot twists which cause the viewer to rethink events of the film and give a different ending than expected. Ocean’s 8 simply goes over the top with this and expects its audience to swallow far too much when the end comes (though I won’t spoil anything here for those who want to see the film for themselves).

Ocean’s 8 is a good but not great heist comedy. Strengths include the strong female ensemble cast and memorable direction and production, but the movie does suffer from a lack of character development and is not always able to balance its personalities. The ending may disappoint moviegoers in that it overdoes the infamous heist movie plot twists to a ridiculous and unbelievable degree. If nothing else, the movie is worth renting come its home video release.

DISCLAIMER: Images in this review are the property of their respective owners, including Warner Bros. Pictures, Village Roadshow Pictures, Smoke House Pictures, and Larger Than Life Productions. For promotional purposes only. All rights reserved.

The Rider - A Powerful and Heartbreaking ...