Along With The Gods: The Last 49 Days Continues This Korean Tale of the Afterlife!

Kim Soo-hong, the brother of Kim Ja-hong who was successfully reincarnated in the previous movie, has arrived in the afterlife, where it’s believed that the trio of Grim Reapers, Gang-rim, Haewonmak, and Lee Deok-choon, believe he has died prematurely and is worthy of reincarnation. As they set out to defend him in his trials of the afterlife, they are given an additional task from King Yeomra – bring an elderly man to the afterlife who has stayed on Earth among the living well past his time. He is, however, protected by a strange “House Demon” who refuses to let them interfere. As Gang-rim seeks his reincarnation and redemption by guiding Kim Soo-hong through his trials, Haewonmak and Lee Deok-chook become sympathetic to the plight of the old man they’re supposed to bring back to the afterlife, and learn more about their past lives, of which they have no memories.

The first Along With the Gods film was a pleasant surprise, despite a few minor flaws, namely its tendency to reach out a bit too far with its plot, and an overlong run time, yet it remains one of my favorite films I’ve seen this year so far. The Last 49 Days proves itself to be a competent enough sequel, retaining the great performances of the actors from the first movie while bringing in a handful of new faces as well. Unfortunately, the sequel doesn’t quite fare as well as the first film. I’d argue that no sequel to the original movie was necessary, as it was largely a standalone work, but the good still outweighs the bad. 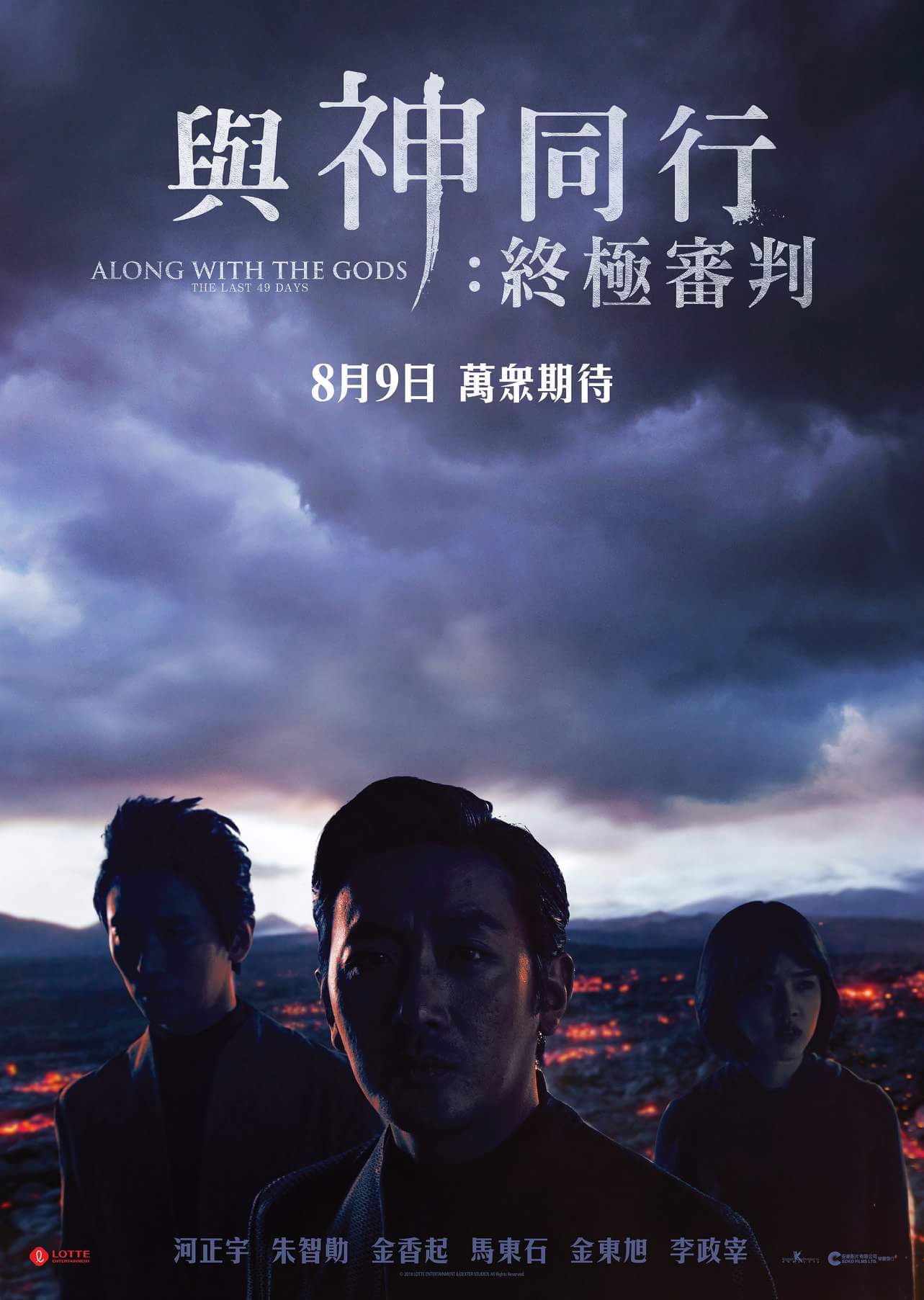 The greatest strength of both Along With the Gods films is the sheer originality of the concept. We follow the lives of three “Grim Reapers” in the afterlife who were once living human beings, but who in their afterlives got to take on this role, guiding the dead who are deemed “paragons” through trials where their innocence and guilt is determined. Whether they’re in the film’s strange, surreal, and haunting vision of hell, or on modern-day Earth in a slum, the films give audiences an intriguing and fun premise sure to keep their attention for the majority of the movie’s duration.

Also worth mentioning is the talent gathered for the film, with everyone being perfectly suited to the parts they play. The trio of Grim Reapers gets some interesting fleshing out and backstory this time around, which sheds some light on just who they are and where they came from a millennium ago, well prior to the events of this film. The highlight of the new arrivals is Ma Dong-seok as Seongju, a “House Spirit” who has taken up residence on Earth to extend an old man’s life and help his family, much to the dismay of our trio of Reaper heroes. Whether it’s a one-scene supporting role or a starring one, everyone is perfect for the part they’re cast for.

The script runs the gamut from dramatic and gritty, to laugh-out-out funny, with the Seongju character being the source of much of the film’s comic relief. There are some hilarious moments here, but the movie doesn’t shy away from true drama, and its attempts to flesh out the often tragic backstories of the Reapers’ previous lives. All of these plot elements are combined with the trial of Kim Soo-hong, whose brother was the central afterlife defendant in the previous film.

If there’s one problem with The Last 49 Days, it’s that the film simply tries to reach too far and do too much. At about 140 minutes, it’s just too long. We’ve got the story of Seongju on Earth and his relationship with the ailing old man and his grandson, the trial of Kim Soo-hong, and the Reapers’ backstories revealed. Don’t get me wrong, I love every single one of these subplots, but it’s too much to cram into one movie. Juggling the plots means confusing characters and individual plot elements, which I did on more than a few occasions while watching. There’s easily enough plot content in this movie to make up two whole movies.

The Last 49 Days is a solid enough sequel to The Two Worlds, even if it does try to reach a bit too far with its storytelling, overwhelming the audience at times. The first film didn’t need a sequel, and while this one’s certainly inferior to the first, it’s still a fun expansion and further look into the lives of these characters. Recommended.

DISCLAIMER: Images are the copyright of their owners including Realies Pictures, Dexter Studios, and Lotte Entertainment. For promotional use only. All rights reserved.