Science Fair is directed by Cristina Costantini and Darren Foster.

High school students around the world compete with one another for a place at the International Science and Engineering Fair (ISEF), where they’ll earn a chance to compete for awards and scholarships, able to further their research and win cash prizes. The competitors include a girl from a high school where athletics are valued above academics, a pair of South American students finding a way to detect viruses which cause life-threatening illnesses, a trio of students developing an improved stethoscope, and a German student investigating the advantages of “flying wing” aircraft designs. Very few will make it to ISEF, and even fewer will win at the competition.

Science Fair is a well-made documentary regarding bright and enthusiastic youths who want to share their knowledge with the world. The obstacles they must face on the way to ISEF are wildly different; the cast ranges from students in middle-class America to those in distressed areas who didn’t have the most comfortable or supportive lives growing up. All of the competitors in the film are likable, and throughout the film’s short-but-effective 90-minute running time, you’ll find yourself rooting for them. 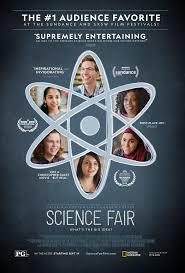 I admire the crew of Science Fair for keeping the running time concise, and the focus on a select few students/groups of students. As such, viewers won’t be overwhelmed by a huge cast. We learn everything we need to know, and everyone brings something new and interesting to the table. You’ll be impressed not only by the students’ academic talents, but also their personalities and social lives as well.

One thing truly gripping about the film is the individual struggles each student must endure. One of the most interesting competitors in the film is a Muslim girl who resides in a typical American town, in a school where athletics are clearly valued over academics, giving this young lady an uphill battle in more ways than one. It’s truly heartbreaking to see the way some of these young geniuses are shafted by the very institutions which are supposed to help them develop their talents for use in the real world. By the end of the film, things seem frustratingly unchanged. Other students come from third-world countries and don’t have the necessary educational supports in place for guidance, while others come from countries which are knowledge-based societies lacking natural resources. It’s truly a diverse cast of characters.

The documentary must be given credit for, despite its emphasis, still being “human” and laugh-out-loud funny at times. The opening sequence, showing a young man winning at an earlier ISEF who lets out a hilariously enthusiastic reaction on the way to the stage to claim his prize, does a good job setting the tone for the rest of the film.

If there’s one weakness, it’s that the film doesn’t focus enough on the non-winners who don’t even make it to ISEF. Those we follow throughout the movies don’t all necessary get “fairy tale” endings, but what of those who worked so hard and didn’t even make it to the international competition? I personally would loved to have more from those students and their parents.

Science Fair is a fantastic documentary well worth checking out for all audiences, young and old alike. It also sheds some light on the frustratingly low support many of these bright young minds of tomorrow get in many of their respective situations. The film comes highly recommended.

DISCLAIMER: All images in this review are the property of their respective copyright holders, including (but not limited to) National Geographic. For promotional use only. All rights reserved.

The Sisters Brothers - A Great Leading ...