Who is BillyBio you may be asking… WELL THEN. You’re in luck because I am going to tell you exactly who he is! Billy Graziadei (BillyBio) is most known for his position as a founding member of the metal band BIOHAZARD.(main vocals, rhythm guitar) He is also part of another metal band, POWERFLO (backing vocals, rhythm guitar). If that’s not enough to ring some bells, Billy is also the owner of Firewater Studios in Los Angeles, CA. This studio is the end result of two decades of seemingly DIY hard work by Billy and his band mates.

While BIOHAZARD is known for being a pioneer in the early stages of metal/hardcore/hip hop blending, I have to say that upon listing to FEED THE FIRE, I did not catch these vibes at all. Not until towards the end of the record, anyway... (fusion within metal is a bit of a  staple for me though so I may not even be noticing it…)

Throughout the entire record I hear distinct styles of hardcore, and of traditional Slayer-like speed/thrash metal. It pretty much sounds like a perfect fusion of Hatebreed and Slayer to me. Personally I keep hearing vocals that remind me of Jamey Jasta. (This is not a bad thing, by the way.... I’ve lost track of how many times I’ve seen Slayer, and I do have Hatebreed lyrics tattooed on my left thigh.)

With about ten years between the formations, I’ll try not to make a ton of Hatebreed comparisons. If anything, Hatebreed probably took a few pages out of Biohazard’s book. Since I was aware of Hatebreed prior to Biohazard, I really don’t have much else to base that off of… (Sorry!)

As far as lyrical content, Billy is no stranger to the necessity to stir up shit when it comes to music of this nature. Through the years this has not changed, and we clearly see that in the opening track of this record. ‘Freedom’s Never Free’ is RIGHT OFF THE BAT in your face, and with the lyrics, “We have a voice and we will be heard, for all that we stand behind.”

It doesn’t stop there… With song titles named, “No Apologies, No Regrets”, “Sick and Tired” and “Disaffected World,” this entire album would fit perfectly on any playlist that promotes positivity through a little bit of aggression.

Who is this album for??? 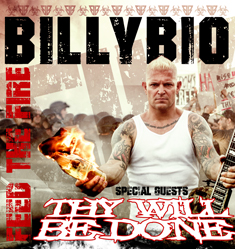 If you’re a fan of genres across the board, this album could be for you. If you appreciate the sounds that are produced when you mix hardcore punk with metal to create a thrashy, dirty intense sound, is right up your alley. This is by no means clean cut, so keep that in mind. Or to put it more simple,  if you are into the East coast hardcore punk scene, this would be a great add in to your collection of records.

BILLYBIO - FEED THE FIRE was released at the end of November in 2018 on AFM Records. He will be part of some of the upcoming European metal festivals this summer. Feed the Fire can be found on ALL digital music platforms and also directly from the artist.

The Nostalgia that Silverstein Brought to Vegas... ...