'Drinking From The Trough Of A Tyrant’s Piss' Album Review

The Living - 'Drinking From The Trough Of A Tyrant’s Piss'

The Living are an atmospheric heavy rock band from San Francisco, California.

I always get nervous when the words "avant-garde" and "music" are in the same sentence. I think that is a fear that I will always have however, San Fransisco based band, The Living, happens to pull it off quite 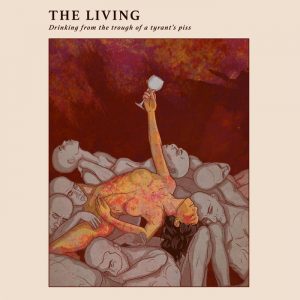 2018 brought the release of "Drinking From The Trough Of A Tyrant’s Piss" a six-song EP. Kicking off the album is a dreamy and almost haunting song "Dirty Dream". "Dirty Dream" is followed by a more rock and '80s vibed song called "Vivaldi".

My favorite song off the album, "Drinking From The Trough Of A Tyrant’s Piss", is an edgy, goth, pop/rock confection.

The Living is definitely a band worth checking out. You can find them at TheLivingBandOfficial.com and on Spotify.

If you want to keep up with what THE LIVING has going on, here are their social links!