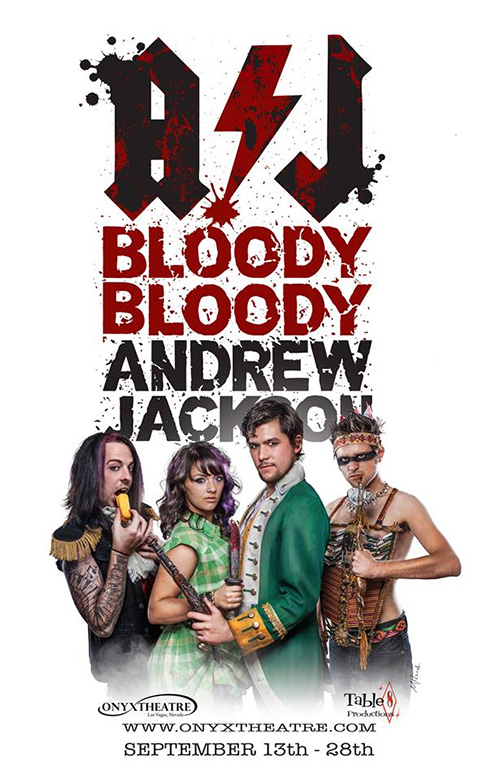 As I took my seat in the well known Onyx Theatre, lit only by production lights and make shift candles next to the bottles of Jack Daniels and the punk-esque posters mirroring an old concert with Jackson’s face upon them, the cast was singing the opening parts to their bloody good play.

Bloody Bloody Andrew Jackson, a musical masterpiece written by Alex Timbers and Michael Friedman, is easily the best thing I have had the pleasure of seeing since Rock of Ages. The raw magnetism of the cast draws in their audience inviting them to clap along to songs with names like “Populism: Yea, Yea”, “I’m Not That Guy”, and the sickeningly hilarious “Ten Little Indians”.

You often here horror stories about President Jackson, but as you watch this you start to feel the pain of the man. The hard work and dedication of director Troy Heard shines through the young men and women chosen to act out Bloody Bloody Andrew Jackson.

The play starts with the dictation of a historian like story teller played by Teresa Fullerton. As the show progresses and the humor becomes scarce, the cast breaks the third wall interacting with her so that she becomes the comic relief… that simply won’t fucking die!

The love story between Andrew Jackson, played by Cory Goble, and Rachel, played by Brenna Folger mirrors the pureness and tragedy of Rent’s Mimi and Roger. The chemistry the two share on stage is almost uncomfortable to watch, and I mean that in a good way. From the fights to the foreplay and down to the interaction with their son Lyncoya, played by the adorable Will Haley, the two click in a way that you almost feel like a stalker of this amazing love affair; key word being affair.

Accompanying these leads are the quirky politicians of John Quincy Adams, played like your typical deer in the headlights village idiot by Michael Drake, the quiet, yet tempered James Monroe by Ross Horvitz, the twinkie loving, homosexually portrayed Martin Van Buren by Andy Vieluf, and the sinister Henry Clay by Jake Taylor. These actors also portray other members of the ensemble not only as Americans who love to party with Jackson, but also at one point as the Indians that back Taylor, who also holds the role as Jackson’s Indian consultant Black Fox, a character that you can’t help being drawn to as you think to yourself is he enemy or ally?

The rest of the ensemble, made up of April Allaine as Elizabeth, Gus Langley as Calhoun, Memory McAllister as Florida Woman, Jon Rahi as the Messenger, and Nicole Unger as the lead female soloist, deliver an equally enthralling performance. Although one always pays attention to the leading roles, the ensemble is one of the most important parts of a good play. These supporting actors and actresses really give life to the tragic story of Andrew Jackson.

Last, but certainly not least, is the musical accompaniment of this show. Fronting the band with haunting vocals perfect for the harshness of rock n’ roll but also the more quiet, ballad type pieces is Brendan Shane. Backing Shane are Sandy Stein on bass, Arles Estes on guitar, Jeremy Gill on drums, and Terry Hopler on keyboard. The band, much like the actors and actresses, switch off and take part in the rock n’ roll debauchery with Jackson.

So, you’re thinking to yourself, “How can a play about the worst president this country has ever known, the American Hitler, be GOOD?” Well, here’s the thing: Between the songs, portrayal, vulgarity, blood, and yes, even tears (mainly during the song “Public Life”) it’s an all around good show. It will make you want to go home and read up on the hated president to find out more about why things happened the way they did under his control. This makes you really realize that he was simply human. You will want the soundtrack. You will want the t-shirts. You will want it to fill your head more.

My only complaint is that I wish it was longer. I honestly did not want it to be over. I know that the actors have shit to do other than entertain little old me, but fuck, this show is so amazing. I went home and priced out copies of the soundtrack for my collection. I plan on seeing this again before the show goes dark on September 28 and you should too. Don’t be an asshole. Visit www.onyxtheatre.com and get your tickets now.

The New “Supergroup” That Will Leave You ...