Home›Features›Black Sabbath - A Look Back at 1982's Live Evil!

By 1982, Ozzy Osbourne had been out of Black Sabbath for several years, embarking upon his solo career. But Black Sabbath continued on with new vocalist Ronnie James Dio, fresh out of Rainbow. This new version of Sabbath had recorded and released two studio records which have long since become known as classics; Heaven and Hell and Mob Rules. The latter album was Sabbath’s first to feature drummer Vinny Appice; thus Tony Iommi and Geezer Butler remained the only original members of the band still there by this point.

It was also around this time that Black Sabbath finally recorded and released what would become their first live album, Live Evil (Live at Last, a release not sanctioned by the band, which consisted of old Ozzy Osbourne era live recordings, had been released a few years prior by a former manager that owned the rights to that particular show). Unfortunately, the subsequent production of the record proved to be problematic; this behind the scenes drama is perhaps more famous than the album itself, with Tony Iommi and Geezer Butler accusing Ronnie James Dio of mixing his vocal parts to be higher in the mix than their respective instruments. This turmoil, coupled with the release of Osbourne’s first solo live album, Speak of the Devil, all tended to overshadow the release itself (the Dio-fronted Sabbath live effort sold better in the United Kingdom, while in the United States the Osbourne record was the better seller).

By this point, Black Sabbath had recorded and released ten studio albums; eight with Osbourne and two with Dio. For the setlist, the band played a mixture of songs from both Osbourne and Dio albums; no material of Dio’s from Rainbow was included. It is also interesting to note that this album is the ONLY officially released live album to ever feature Dio singing Ozzy Osbourne Black Sabbath songs. The album artwork is unique as well, featuring elements that represent the songs on the album (a knight emitting an eerie glow for “Neon Knights,” a humanoid pig in military fatigues for “War Pigs,” etc.) Drummer Vinny Appice and longtime keyboardist Geoff Nichols are not credited as “full” members of the band on the rear sleeve (though it is unclear as to how much of a member of the band Nichols actually was). This lineup of the band reunited in 1992 for the Dehumanizer studio album, and for live and studio material in the late 2000s under the name Heaven and Hell.

There have been a number of official releases of this album on CD; some older versions were condensed and featured the removal of crowd noise, banter, and the outro to fit everything on a single disc. More recent releases are on two CDs and contain the content of the original vinyl, uncut and unedited. 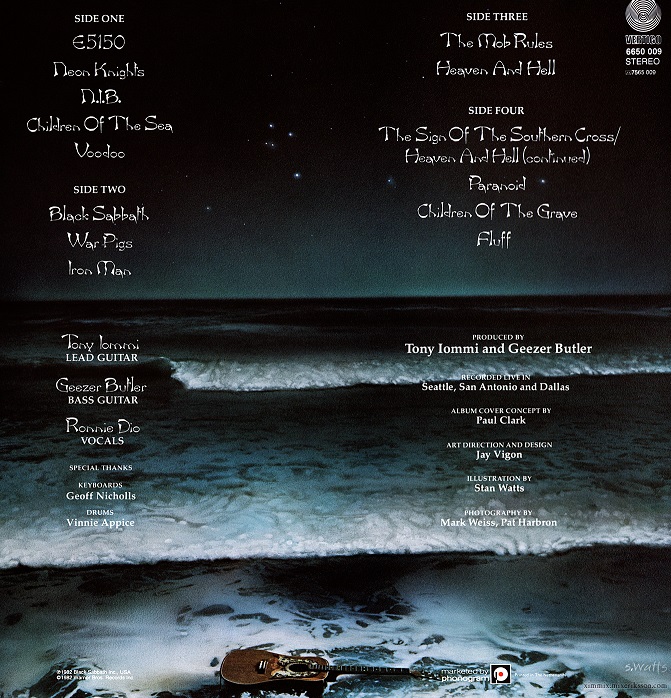 Black Sabbath's first official live album was 1982's Live Evil. The rear sleeve shows the setlist and credits; this is the rear artwork from the vinyl release.

In the aftermath of the release, Ronnie James Dio and Vinny Appice left the band and played together in (the band) Dio; original drummer Bill Ward would briefly return following their departure, and the group would recruit former Deep Purple singer Ian Gillan as the frontman for their next album and tour.

But, is Live Evil any good?

As a die-hard fan of all things Ronnie James Dio and Black Sabbath alike, I can honestly say that Live Evil is a must own that belongs in the collection of every fan. There was a good deal of inner turmoil following these live recordings by the time the band got to the studio, but the performance is spirited and powerful from start to finish. Ronnie James Dio (RIP) has always been one of hard rock and heavy metal’s most powerful vocalists, and even before he reached his pinnacle of success and fame a few years later in his own band, already here he was beautifully demonstrating why he is one of the greats. Tony Iommi is at the top of his game, as is his longtime Sabbath bandmate, Geezer Butler. Even Vinny Appice, at this stage of the game a new member of the band himself, pounds away at the drums with a ferocity few others behind the kit can rival (and to this day kicks ass in any band he plays with).

The song choices are good as well, featuring the highlights from not only Heaven and Hell and Mob Rules, but also a wide number of selections of the biggest hits from the Ozzy Osbourne era. In addition to a well crafted setlist, the live versions do the originals justice. One of the biggest surprises is hearing Dio sing the Osbourne material; he performs these songs well enough and makes them his own, never quite copying Osbourne but at the same time giving us faithful renditions (I am NOT saying these are better than the original studio recordings with Osbourne, however). This lineup was one of Sabbath’s finest, and perhaps nowhere is it truer than on Live Evil.

Black Sabbath’s first official live album is a classic for the ages, with the late, great Ronnie James Dio belting out powerful renditions of his own era Sabbath songs and classic Osbourne era ones as well. The result is a fantastic live record that belongs in the collection of anyone that calls themselves a fan of classic hard rock and heavy metal. Highly recommended, but be sure you are buying the 2CD remastered version that contains the full uncut concert!