In the late 80s and early 90s, Extreme became known as a truly unique band, fusing musical styles and winning over fans all around the globe. But it was their 1990 magnum opus, Pornograffitti, that truly showed the world what they were capable of, putting them on the map. Fueled by the hit ballad "No More Words," the group had a global fanbase practically overnight, even in their future efforts did not achieve the same level of fame.

Extreme reunited in recent years, featuring classic members Gary Cherone (who served a brief stint in Van Halen in the late 90s), Nuno Bettencourt, and Pat Badger, alongside new drummer Kevin Figueiredo. In 2015, alongside Skid Row, Great White, and Twisted Sister, the group played The Joint inside the Hard Rock Hotel and Casino in Las Vegas for the Metal Meltdown show, using their set to perform Pornograffitti in its entirety to an enthusiastic audience.

Metal Meltdown’s four individual sets are being released as Blu-ray, DVD, and CD sets; the Twisted Sister one was released earlier this year, with the Skid Row and Great White ones on the way in the future.

It is great to see Extreme still going strong in a live setting, with three of the four classic band members. Though often lumped under the glam/hair label, Extreme’s sound was far more diverse than many of their contemporaries; they had a wide variety of musical elements pulled from numerous genres, and this was demonstrated beautifully on the Pornograffitti record. Comparisons to groups like Aerosmith, Queen, and Van Halen are common, and perhaps rightfully so. This is a band that took some of the best in the music world and brought it all together to make something of their own. 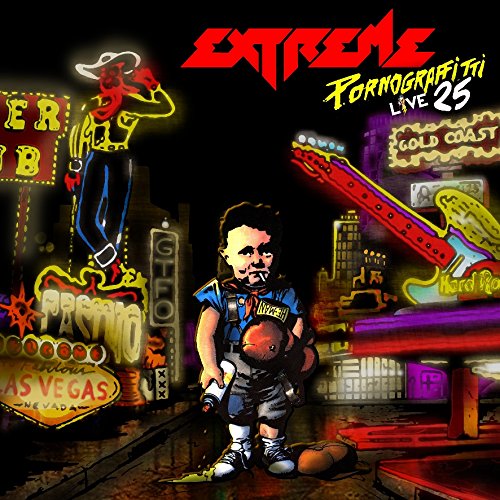 And the band still delivers on a live stage. Gary Cherone remains one of rock’s most charismatic, if not underrated frontmen; his vocals are as strong as they have ever been. And who could forget the mighty Nuno Bettencourt; a guitar virtuoso that remains a worldwide sensation for all the right reasons? Also the band’s two chief songwriters, the musical output they have put together over the years still shows and stands the test of time, more so than a number of other groups that debuted and peaked around the same time.

This is an epic show on a live Las Vegas stage; these guys are energetic and spirited, and definitely give the crowd here what their paid for, playing every song from their seminal 1990 album from start to finish, in sequential order. Obviously, some parts have to be overdubbed/pre-recorded since the original album had a number of portions that cannot be recreated on the live stage (for instance, there were horns on some of the original album tracks). Highlights include the lengthy epic intro of “Decadence Dance,” a stripped down intimate performance of the classic “More Than Words,” and the lounge-style song “When I First Kissed You,” played with a piano and true to its album counterpart. Following the Pornograffitti tracks, two encores from other Extreme records are performed; “Play with Me” from their debut, and “Cupid’s Dead,” from their oft-forgotten (but excellent!) third album.

Personally, as a fan of the band, I loved seeing this show on a live Blu-ray Disc (unfortunately I was unable to attend the actual gig, though many friends of mine out here in Vegas did). And while I am a little disappointed in not being able to hear some classics from other records (“Kid Ego,” “Little Girls,” “Color Me Blind,” “Rest in Peace,” and “Warheads” are sorely missed), no one can deny the intensity the group brings to the table here. A fan of Extreme is not going to be disappointed.

This is a three disc set, with a Blu-ray Disc, a DVD of the same content, and an audio CD (though the CD lacks the encores due to time constraints). The video presentation features the full concert (roughly 90 minutes), a documentary on the band’s history (roughly 100 minutes), and a brief “picture gallery.”

Unfortunately, Proud and Loud records learned nothing from the mistakes they made on the Metal Meltdown Twisted Sister disc. The flow of the concert is severely disrupted with interview clips that are interspaced between songs. Why do companies putting out concert videos keep doing this!? A concert presentation on a disc should always be JUST THE CONCERT, and possibly an intro/outro if need be, and other stuff relegated to bonus material. Disappointed to see them drop the ball here again.

The reverse is true of the documentary, once again. Like the concert, the documentary is disrupted and butchered by the inclusion of FULL SONGS from the concert portion of the disc (not just short clips). This means if you watch them one after the other, you will get a ton of repetition. If any manufactures of this disc (and the Twisted Sister one) are reading this review: DO NOT repeat these mistakes on the Skid Row or Great White discs!

Extreme’s Metal Meltdown set gives fans a great live performance of the Pornograffitti album, with the band in their element. But Loud and Proud Records has made the same mistakes they made on the Twisted Sister disc, putting interview/documentary clips in the middle of the concert, and vice versa. If you can overlook these problems, though, it is a fantastic performance from one of rock’s greatest and most underrated acts. Flaws of the disc aside (which are no fault of the band), this comes recommended!