In 1950s England, revered dressmaker Reynolds Woodcock befriends Alma, a waitress in a restaurant in a hotel where he is staying. He takes her into his life, seeing her as something of an inspiration and a muse. But over time, Alma discovers Reynolds’ true nature; an obsessive man who loathes change and everyone that comes into his life. Can Alma persevere and will a relationship between the twosome be possible, or are things doomed to fail?

In defense of his critically-reviled 2001 film Freddy Got Fingered, comedian Tom Green famously claimed that the critics hated his movie because it lacked “violins and British accents.” While I certainly will not defend Green’s film, I am inclined to agree with him in part, especially after seeing Phantom Thread. The movie is proof that violins and British accents do not make a movie good, even though critics seem to be fawning over it. In fact, the movie is a dull, lifeless slog that lasts for over two hours, with very few redeeming qualities. 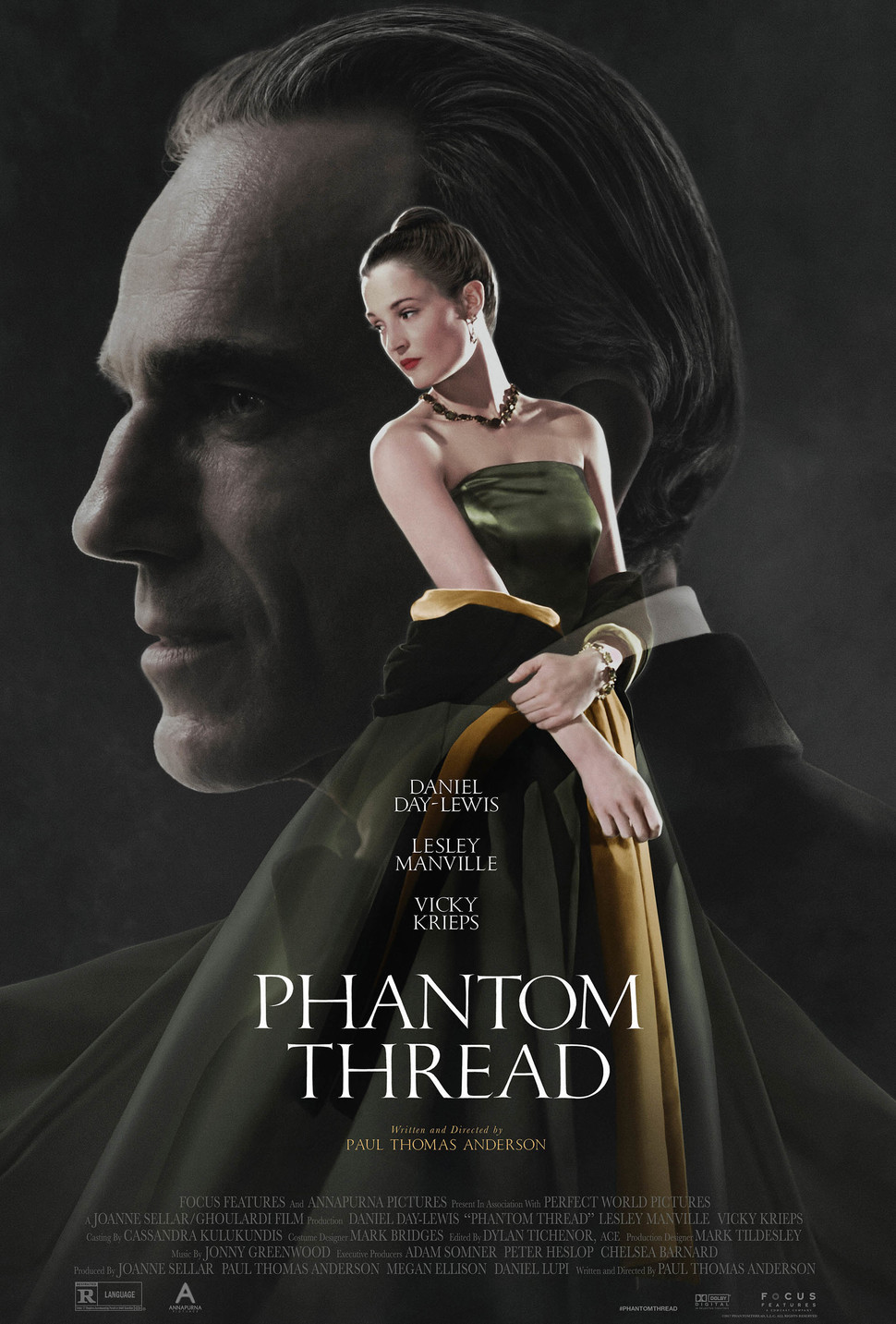 Phantom Thread is a film with a beautiful look about it; there are some fantastic period pieces and it does a good job capturing the look and atmosphere of a bygone era, from the buildings to the cars. Unfortunately, this is about the only thing about the film I enjoyed.

Daniel Day-Lewis has claimed he is retiring from acting, and that his role as Reynolds Woodcock in this film will be his last. Unfortunately, this isn’t exactly going out on a high note. His character in this film is completely unsympathetic, and not very interesting. Even other movies with “heartless” characters give us something to like about them. Hell, Day-Lewis' character in this movie makes Christopher Plummer's take on J. Paul Getty in All the Money in the World look downright friendly and likable by comparison! Day Lewis' Reynolds is not approachable, has no redeeming qualities even after the movie has ended, and says “fuck” far more than I am sure anyone in 1950s England ever did. Day-Lewis can shine in the right material, but he can’t rise above Phantom Thread writing him as a heartless and uninteresting tyrant.

While the look of the film is solid and captures its respective era, the performances and the script do not. The writing feels wooden, and one wonders if the actors are reading the lines from cue cards. Lines are written in such an unnatural way that none of this feels or sounds like what would say in a real conversation. The cold, desolate atmosphere in the film is not helped by this, and makes the experience all the more unappealing. It does not help that none of the actors/characters seem to have any chemistry, or like for one another. The actors and actresses are not to blame here; many of them have proven themselves in other roles.

The sheer premise of this tale is simply not enough to devote 130 minutes to. A dressmaker meets a girl that becomes his muse and they have difficulties…. That’s basically the entire film. No one in this film acts, behaves, or speaks in a realistic manner. Reynolds is unsympathetic and without redeeming qualities, and even Alma, portrayed by the lovely Vicky Krieps, becomes uninteresting because she chooses to stay with such an abusive and manipulative man without simply walking out of his life, which would have been the ultimate and more realistic revenge. As such, the resolution here, if one can call it such, is laughable at best (though I will not spoil it for those that still want to see the film).

Phantom Thread has a beautiful look with its vintage cars and locales, but it also has a wooden script, actors with no chemistry, a pretentious feeling throughout its bloated duration, and uninteresting, unsympathetic characters that the audience cannot forge a connection with. Did I mention Daniel Day-Lewis says “fuck” a lot? The movie has become a “critic’s darling,” but the sad and simple truth is that it simply is not good, and everyday moviegoers are going to be tilting their heads in confusion at what they see unfold on screen. You aren’t likely to find a more mundane two-hour-plus slog at the movies than Phantom Thread, which is a shame considering it could have been so much better.

DISCLAIMER: All images in this review are the property of their respective copyright holders, including Annapurna Pictures, Perfect world Pictures, and Ghoulardi Film Company. For promotional use only. All rights reserved.

Hostiles - Christian Bale Returns to the ...