Home›Reviews›Prequelle: The New Album By Ghost Fronted By Cardinal Copia

Prequelle: The New Album By Ghost Fronted By Cardinal Copia

Landing at No. 3 on the US Billboard charts this past week, Prequelle, the 4th studio album by Ghost, is probably the most diverse of the others. I’ve been following this band for a while now, and each time they put out something new, I become more enthralled. This album is no different. It is much more melodic and poppy than previous albums for the first half and full of ballads during the second, which could be due to deciding not to have another Papa, but instead a Cardinal, leading the band. If you have no idea what I am talking about, I suggest you go to Ghost’s Facebook page and brush up on the messages from the Clergy in their video section. On to the record:

Kicking everything off is the nursery rhyme speaking of the bubonic plague, followed by instrumentals. “Ashes” is heavily synthy, which foreshadows how the rest of the album will go. Or does it…?

The first single, which we were offered by the band prior to the album dropping, “Rats”, is melodic synth pop, with pop backing vocals on the deep chorus. The song title is a wonderful follow up to “Ashes” considering the cause of the plague outbreak that we now read about, commonly known as the Black Plague, is believed to have been caused by the rodents. After the first chorus, we get a bit more of a metal taste, but still not quite what we are used to. Regardless, it caught my attention when it  was released, and even though it is the “single”, it is probably one of my least favorite songs on the album.

“Faith” is completely different from the two tracks before it. The intro to the song is full of melodic Deathklok-esque guitars, making it probably the most “classic” Ghost sounding song on the record in my opinion. The drums are heavy. The vocal breakdown is dark and growly and menhiacle. Definitely not something you want to hear in the middle of the night.

While 2010s Opus Eponymous had “Ritual”, a Blue Oyster Cult type of song, "See The Light" is reminiscent in the verses of AFI during the CrashLove era, and during the chorus it holds a quality similar to U2’s “Hold Me, Thrill Me, Kiss Me, Kill Me”, which kind of sounds like Diet Depeche Mode, so I guess it's more DM-ish... Some of you may be wondering where the fuck I get that from, but it’s the first thing that popped into my head. It is mainly the chorus melody. Add in the lyrical content, which is a darker Last Supper reference, and oh man. SO GOOD! This is definitely a top song for me on the record, and I am shocked that hasn’t been released as a single.

The next track, “Miasma” is an instrumental, but due to the types of settings used on the instruments, gave it a very MIDI file sound, as if it could be a castle level in Mario Bros. or Legend of Zelda. However, it is still amazing, and about halfway through the song, the instrument you wait for isn’t an additional guitar or a deep bass. It’s the fucking tambourine. It cuts through the rest of the song like a bullet as it speeds faster and faster, and I can only imagine how much more amazing it would be with vocals added to it. Then comes the keytar solo, which is fucking amazing. It’s not over there though. Enter a goddamn saxophone. Yes, a saxophone, which rounds out the song and takes it into this devilish jazzy outro. Best song on the record. Hands down.

Okay. Everyone has been losing their shit over “Dance Macabre”. People I know who have never been able to get into Ghost have changed their minds because of this tune. Why? Because it sounds like it could be in a goth version of Dirty Dancing or Flashdance, that’s why. It’s poppy with melodic metal guitar solos, and the chorus makes you WANT to “Dance Macabre”. It is seriously like hopping into a time machine and stepping off in 1985, but everyone is in black. What’s wrong with that? Absolutely nothing.

“Pro Memoria” is lyrically dark, but it sounds melodically like it was written by Neil Young, although he can be dark as hell too. Leading in with a beautiful melody done by strings, and followed by the sweet sound of Copia’s beckoning voice, this is a song that is closest to the tongue in cheek Satanism we are used to from Ghost. Then the chorus kicks in, “Don’t you forget about dying.” and the chills I’ve gotten from this band so many times before took over. It’s nice to get softer tracks on this record, and this song is no exception to the beauty that this record brings to the Ghost collection.

With a HIM type of feel, "Witch Image" is full of beautiful melody lines and a blend of acoustics and distortion, which creates an eargasm of crescendos and decrescendos. Much like any other Ghost song, it's catchy, and after just a couple of listens, it is easy to remember the lyrics, which you can't help but sing along to. The Nameless Ghouls on guitar show off their ability to play off of each other, and this showcases just how amazing the musicianship of the band is. My only complaint is that the song seems to end prematurely, as if there should be more coming, but instead it just fades.

Another instrumental, "Helvetesfönster" starts sweetly. Due to the simple flute or penny whistle type instrument that is prominent through the song, it sounds as if it could be playing at your local Renaissance Festival. After the piano kicks in, it takes on an entirely new tone. Just when you think it is over due to it calming down and almost fading out, it comes back in with what sounds like a harpsichord accompanied by the flute again, bringing you back to the Renaissance feel.This truly sounds like an overture for a play or a musical of some kind, which is not a bad thing. While it was a definite risk having two long instrumentals on the record, it was a risk that turned out in their favor.

Rounding out the album is the ballad "Life Eternal", which I have yet to figure out if it is a love song to a person or to Lucifer. With Ghost, you just never know. The lyrics seem to elude to that moment where you have to be okay with letting go of life and moving on to the next plane of existence. The vocal line, as always, is beautiful, especially when the echoing "forever" is brought to the forefront by the choir.

As always, Ghost has a little extra up their sleeve, and with the limited edition CD or 7” vinyl, you get two bonus tracks: “It’s A Sin”, originally by the Pet Shop boys, and “Avalanche” originally by the late Leonard Cohen. This band always does the strangest and most amazing covers, which if you’ve not heard any, go pick up a copy of If You Have Ghosts right now. Seriously, stop reading this article and go buy it now.

“It’s A Sin” is upbeat and full of guitars, while still holding the synth-pop feel that The Pet Shop boys are known for. Copia’s voice, coupled with the tuned down guitars, make this cover truly sinful, and it’s fucking delicious.

As for “Avalanche”, anything Leonard Cohen would have been perfect for Ghost due to Cohen’s dark and entrancing lyrics and melodies. This shows a bit of a deepness in tone that we don’t typically get from this band, adding yet again another element that Copia brings as opposed to the Papas.

Overall, there are a lot of “love” songs on this album, which is… an interesting turn for Ghost. It’s lighter and more fun than the previous records, which were darker, but it works well. What is truly fascinating about this band, is that while we all know Tobias Forge has been the vocalist on each album, taking on a new nomme de plume with each album (Papa Emeritus, Papa Emeritus II, Papa Emeritus III, and now Cardinal Copia), his voice has continued to evolve to fit his character. It is still the same tone, and you can tell it is the same man singing, but there’s always something a little different. It has gone from being dark as Papa I & II, to kind of a sultry Papa III (who if you ever saw him live, was definitely a flirt), to a sweeter tone in Cardinal Copia.

For casual fans who only like the darker stuff, this may be an album they don’t like. However, for die-hard Ghost fans, this will be yet another record that we can listen to from beginning to end. There isn’t really any filler on it. I’ve yet to find a Ghost record that has my opinion of filler.

While I am kind of disappointed that we don’t have a song that is equivalent to a “Year Zero” or “Mummy Dust” as far as heaviness, Cardinal Copia and the Nameless Ghouls still bring Satan into our homes and hearts. Overall, I give it 9.5 out of 10 Sigils of Baphomet.

Ghost is currently on the road in support of Prequelle, and the A Pale Tour Named Death shows that have taken place so far have gotten a very positive response. Be sure to check them out this Autumn if they come to your town or a town near you! For those coming to the Vegas show at The Joint inside of the Hard Rock Hotel & Casino, I will see you on November 17th! 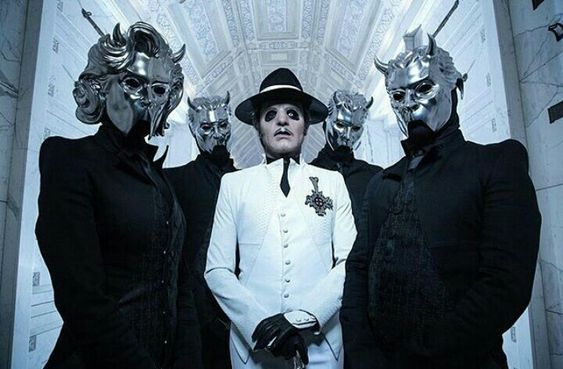 If you have never seen Ghost or heard any albums, feel free to check out some of our other Ghost reviews below!

Tag - Over-The-Top, Ridiculous Comedy at Its ...

The Rider - A Powerful and Heartbreaking ...