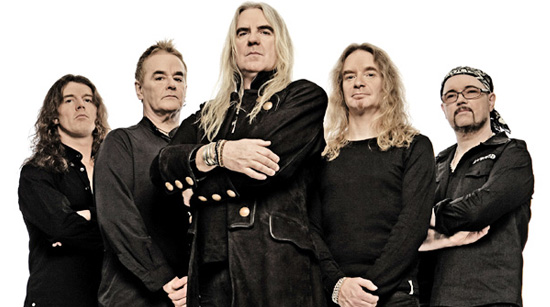 Saxon have been a Heavy Metal force since 1979 and have consistently been a flag bearer for the entire genre. 20 studio albums. Thousands of shows. Countless tours. Who knows how many people and bands they've influenced. And let me tell you... after seeing them live. Age is not EVEN a factor. You could be blindfolded and hear them play a show, and you'd think it was 1985. Their performance was top-notch. All members brought it to the table for nearly 2 hours straight without losing an ounce of energy. Impressive indeed.

Rewind back 7 hours before Saxon reminded us why they're so great at what they do and their experience factor. I sat down with Biff Byford on their tour bus and picked his brain for a little info...

How's the tour going with Fozzy?

Doing alright so far, yeah. It's been great. Some great shows. This is the first time we've been coast to coast in some time, so yeah we've been really pleased with it.

What does Saxon eat when they're on the road?

Eat?! Well anything that's spicy really. A lot of mexican. Bacon. A lot of protein stuff. A lot of carbs.

There are lots of bands I would've liked to have played with, but we've played with a lot of bands though. We liked Deep Purple, and played with the Rainbow guys. Toured with Rush in the early days. Black Sabbath. Toured with Blue Oyster Cult. We've done a lot of tours with Motley Crue. Iron Maiden was great. But yeah we've toured with most bands that we liked.

20 albums in, what inspires you to keep writing lyrics? What do you draw inspiration from?

Just write as it comes really. There's a lot of stuff I write that's really history based. Or life based. I write underdog lyrics. Never surrender. Stand up and fight... things like this. Pretty much though the band just does the riffs and I'll do all the lyrics and melodies. It works well together. I don't really know what I want to write before I write it. I just wait for inspiration to come through. I'll have ideas. But different things interest me. I might see something on TV or read a book.

What is left for Saxon to conquer?

Not much really. We've toured the world now and some countries are bigger than others. It's really now just making new albums and going out touring. That's what our life is. I suppose we'll just keep doing that until we stop. 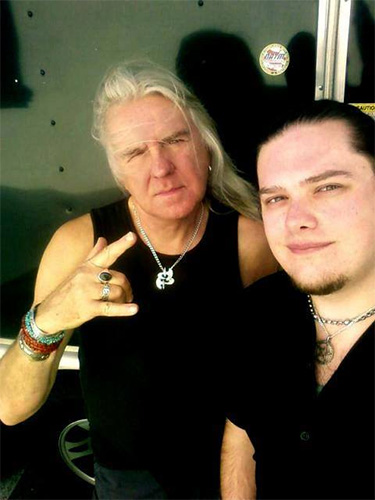 What does Saxon mean to you?

Ah it's just a way of life really. It's just what we do. It's just to be in a band and tour the world... it's a special thing.

Are there any newer bands that interest you?

Well there are some, but they're not new for very long are they? Black Spiders. The Sword, I like some stuff that Bullet for my Valentine is doing. Airbourne, they're great. We help new bands as much as we can. Fozzy is a newer band and we've taken them out on tour with us and they're pretty damn great and very nice.

In other parts of the conversation, Biff Byford did say Saxon plans on a new album and another possible North American tour in the future. That's always good news, and we hope that Saxon does come back to Vegas again, and hopefully we'll get another opportunity for another interview!